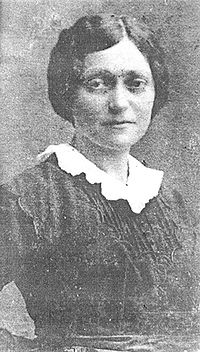 Isidora Sekulić (February 16, 1877 – April 5, 1958) was a famous Serbia
Serbia
Serbia , officially the Republic of Serbia , is a landlocked country located at the crossroads of Central and Southeast Europe, covering the southern part of the Carpathian basin and the central part of the Balkans...
n prose writer, novelist, essayist, adventurer, polyglot and art critic.

Sekulić was born in Mošorin
Mošorin
Mošorin is a village in Serbia. It is located in the Titel municipality, South Bačka District. Mošorin is situated in the Autonomous Province of Vojvodina, in the south-eastern part of Bačka, known as Šajkaška. The village has a Serb ethnic majority and its population numbering 2,763 people...
, Bačka
Backa
Bačka is a geographical area within the Pannonian plain bordered by the river Danube to the west and south, and by the river Tisza to the east of which confluence is located near Titel...
, in what is now the Serbian province of Vojvodina
Vojvodina
Vojvodina, officially called Autonomous Province of Vojvodina is an autonomous province of Serbia. Its capital and largest city is Novi Sad...
. Apart from her studies in literature, Sekulić was also well versed in natural sciences as well as philosophy. She graduated from the pedagogical school in Budapest
Budapest
Budapest is the capital of Hungary. As the largest city of Hungary, it is the country's principal political, cultural, commercial, industrial, and transportation centre. In 2011, Budapest had 1,733,685 inhabitants, down from its 1989 peak of 2,113,645 due to suburbanization. The Budapest Commuter...
in 1892, and obtained her doctorate in 1922 in Germany
Germany
Germany , officially the Federal Republic of Germany , is a federal parliamentary republic in Europe. The country consists of 16 states while the capital and largest city is Berlin. Germany covers an area of 357,021 km2 and has a largely temperate seasonal climate...
. Her travels included extended stays in England
England
England is a country that is part of the United Kingdom. It shares land borders with Scotland to the north and Wales to the west; the Irish Sea is to the north west, the Celtic Sea to the south west, with the North Sea to the east and the English Channel to the south separating it from continental...
, France
France
The French Republic , The French Republic , The French Republic , (commonly known as France , is a unitary semi-presidential republic in Western Europe with several overseas territories and islands located on other continents and in the Indian, Pacific, and Atlantic oceans. Metropolitan France...
and Norway
Norway
Norway , officially the Kingdom of Norway, is a Nordic unitary constitutional monarchy whose territory comprises the western portion of the Scandinavian Peninsula, Jan Mayen, and the Arctic archipelago of Svalbard and Bouvet Island. Norway has a total area of and a population of about 4.9 million...
. Her travels from Oslo
Oslo
Oslo is a municipality, as well as the capital and most populous city in Norway. As a municipality , it was established on 1 January 1838. Founded around 1048 by King Harald III of Norway, the city was largely destroyed by fire in 1624. The city was moved under the reign of Denmark–Norway's King...
through Bergen
Bergen
Bergen is the second largest city in Norway with a population of as of , . Bergen is the administrative centre of Hordaland county. Greater Bergen or Bergen Metropolitan Area as defined by Statistics Norway, has a population of as of , ....
to Finnmark
Finnmark
or Finnmárku is a county in the extreme northeast of Norway. By land it borders Troms county to the west, Finland to the south and Russia to the east, and by water, the Norwegian Sea to the northwest, and the Barents Sea to the north and northeast.The county was formerly known as Finmarkens...
resulted in Pisma iz Norveške / Letters from Norway meditative travelogue in 1914. Her collection of short stories, Saputnica, are unusually detailed and penetrating accomplishment in self-analysis and a brave stylistic experiment. She also spoke several classical as well as nine modern languages.

Sekulić's lyrical, meditative, introspective and analytical writings come at the dawn of Serbian prose writing. Sekulić is concerned with the human condition of man in his new, thoroughly modern sensibility. In her main novel, The Chronicle of a Small Town Cemetery (Кроника паланачког гробља), she writes in opposition to the usual chronological development of events. Instead, each part of the book begins in the cemetery, eventually returning to the time of bustling life, with all its joys and tragedies. Characters such as Gospa Nola, are the first strong female characters in Serbian literature
Serbian literature
Serbian literature refers to literature written in Serbian and/or in Serbia.The history of Serbian literature begins with theological works from the 10th- and 11th centuries, developing in the 13th century by Saint Sava and his disciples...
, painted in detail in all their courage, pride and determination.