Encyclopedia
Ipatiev House was a merchant's house in Yekaterinburg
Yekaterinburg
Yekaterinburg is a major city in the central part of Russia, the administrative center of Sverdlovsk Oblast. Situated on the eastern side of the Ural mountain range, it is the main industrial and cultural center of the Urals Federal District with a population of 1,350,136 , making it Russia's...
where the former Emperor Nicholas II of Russia
Nicholas II of Russia
Nicholas II was the last Emperor of Russia, Grand Prince of Finland, and titular King of Poland. His official short title was Nicholas II, Emperor and Autocrat of All the Russias and he is known as Saint Nicholas the Passion-Bearer by the Russian Orthodox Church.Nicholas II ruled from 1894 until...
, his family and members of his household were executed following the Bolshevik Revolution. Coincidentally, its name is identical with that of the Ipatiev Monastery
Ipatiev Monastery
The Ipatiev Monastery —sometimes translated into English as Hypatian Monastery—is a male monastery, situated on the bank of the Kostroma River just opposite the city of Kostroma...
in Kostroma
Kostroma
Kostroma is a historic city and the administrative center of Kostroma Oblast, Russia. A part of the Golden Ring of Russian towns, it is located at the confluence of the Volga and Kostroma Rivers...
, from where the Romanovs came to the throne.

In the 1880s, Ivan Redikortsev, an official involved in the mining industry, commissioned a two-story house to be built on the slope of a prominent hill. The length of the facade was 31 metres. In 1898, the mansion passed to Sharaviev, a gold dealer of tainted reputation. Ten years later, the house was acquired by Nikolai Nikolayevich Ipatiev, a military engineer, who turned the ground floor into his office.
It seems to have been on the basis of information supplied by Pyotr Voikov that Ipatiev was summoned to the office of the Ural Soviet at the end of April 1918 and ordered to vacate what was soon to be called "The House of Special Purpose."

The Romanov family moved in on 30 April and spent 78 days at the house. Nicholas Romanov, his wife
Alexandra Fyodorovna of Hesse
Alix of Hesse and by Rhine later Alexandra Feodorovna Romanova , was Empress consort of Russia as spouse of Nicholas II, the last Emperor of the Russian Empire...
, their four daughters
OTMA
OTMA was an acronym sometimes used by the four daughters of Russian emperor Nicholas II and Alexandra Feodorovna as a group nickname for themselves, built from the first letter of each girl's name in the order of their births:...
, their son, their Court Physician/Doctor Yevgeny Botkin
Eugene Botkin
Yevgeny Sergeyevich Botkin was the court physician for Tsar Nicholas II and Tsarina Alexandra and, while in exile with the family, sometimes treated the hemophilia-related complications of the Tsarevich Alexei Nikolaevich of Russia.Botkin went into exile with the Romanovs following the Russian...
, chambermaid Anna Demidova
Anna Demidova
Anna Stepanovna Demidova was a maid in the service of Tsarina Alexandra of Russia. She acquired posthumous fame because she was murdered alongside her employer in 1918....
, Cook Ivan Kharitonov
Ivan Kharitonov
Ivan Mikhailovich Kharitonov, , was a cook at the court of Tsar Nicholas II of Russia. He followed the Romanov family into internal exile following the Russian Revolution of 1917 and was executed with them by the Bolsheviks on July 17, 1918 at Ekaterinburg.Like the Romanovs, Kharitonov was...
, and Valet Alexei Trupp, were shot there by a squad of Bolshevik
Bolshevik
The Bolsheviks, originally also Bolshevists , derived from bol'shinstvo, "majority") were a faction of the Marxist Russian Social Democratic Labour Party which split apart from the Menshevik faction at the Second Party Congress in 1903....
secret police under the Cheka chief Yakov Yurovsky
Yakov Yurovsky
Yakov Mikhaylovich Yurovsky was an Old Bolshevik best known as the chief executioner of Russia's last Tsar, Nicholas II and his family in 1918, during the Russian Civil War.- Early life :...
, on July 16/July 17, 1918. Kitchen-boy Leonid Sednev
Leonid Sednev
Leonid Ivanovich Sednev was a chef's assistant who in 1917-18 served the former Russian Imperial Family during their exile in the Siberian villages of Tobolsk and Yekaterinburg...
was called out of the house hours earlier and thus spared from execution.

The execution squad comprised four Russian Bolsheviks and seven soldiers. These soldiers were Hungarians, prisoners-of-war who didn't speak Russian. As Communists they had joined the 1st Kamyshov Rifle Regiment of the Red Army. They were chosen because the local Cheka
Cheka
Cheka was the first of a succession of Soviet state security organizations. It was created by a decree issued on December 20, 1917, by Vladimir Lenin and subsequently led by aristocrat-turned-communist Felix Dzerzhinsky...
feared that Russian soldiers would not shoot at Nicholas and his family, particularly at his daughters. Ironically, the soldiers were blindfolded as well as the condemned, leading to an inefficient and tremendously messy execution process. One of them was called Imre Nagy. Some claim that he was the same Imre Nagy
Imre Nagy
Imre Nagy was a Hungarian communist politician who was appointed Chairman of the Council of Ministers of the People's Republic of Hungary on two occasions...
who later became Prime Minister of Hungary
Hungary
Hungary , officially the Republic of Hungary , is a landlocked country in Central Europe. It is situated in the Carpathian Basin and is bordered by Slovakia to the north, Ukraine and Romania to the east, Serbia and Croatia to the south, Slovenia to the southwest and Austria to the west. The...
and was executed after the crushing of the anti-Soviet revolution of 1956 by the Red Army. This theory is supported by several Russian historians, but it is generally dismissed by Hungarian experts. Although Imre Nagy was living in Siberia in 1918, the name is very common among Hungarians. 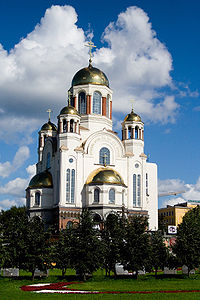 As early as 1923, the photographs of the fenced house were disseminated in the Soviet press under the label of "the last palace of the last Tsar". In 1927, the house was designated a branch of the Ural Revolution Museum. It then became an Agricultural School before taking on new life in 1938 as Anti-Religious Museum. During this period it was customary for party apparatchik
Apparatchik
Apparatchik is a Russian colloquial term for a full-time, professional functionary of the Communist Party or government; i.e., an agent of the governmental or party "apparat" that held any position of bureaucratic or political responsibility, with the exception of the higher ranks of management...
s to arrive in large tour groups, posing before the bullet-damaged wall of the cellar in which the former Tsar and his family had been killed. In 1946 it was taken over by the local Communist Party. In 1974 it was formally listed as a Historical-Revolutionary Monument. But, to the embarrassment of the government, it was steadily becoming a place of pilgrimage for those who wished to honour the memory of the imperial family.

In 1977, as the sixtieth anniversary of the Russian Revolution approached, the Politburo
Politburo
Politburo , literally "Political Bureau [of the Central Committee]," is the executive committee for a number of communist political parties.-Marxist-Leninist states:...
decided to take action, declaring that the house was not of 'sufficient historical significance', and ordering its demolition. The task was passed to Boris Yeltsin
Boris Yeltsin
Boris Nikolayevich Yeltsin was the first President of the Russian Federation, serving from 1991 to 1999.Originally a supporter of Mikhail Gorbachev, Yeltsin emerged under the perestroika reforms as one of Gorbachev's most powerful political opponents. On 29 May 1990 he was elected the chairman of...
, Chair of the local party, who had the house demolished in July 1977. He later wrote in his memoirs, published in 1990, that "sooner or later we will be ashamed of this piece of barbarism.". But, despite this action, the pilgrims kept coming, often in secret and at night, leaving tokens of remembrance on the vacant site. After the fall of the Soviet state the Church on the Blood was built on the site, now a major place of pilgrimage.