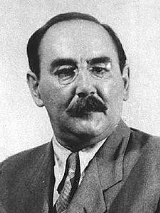 Nagy (ˈnɒɟ) was born in Kaposvár, to a peasant family and was apprenticed to a locksmith. He enlisted in the Austro-Hungarian Army
Austro-Hungarian Army
The Austro-Hungarian Army was the ground force of the Austro-Hungarian Dual Monarchy from 1867 to 1918. It was composed of three parts: the joint army , the Austrian Landwehr , and the Hungarian Honvédség .In the wake of fighting between the...
during World War I and served on the Eastern Front. He was taken prisoner in 1915. He became a member of the Russian Communist Party
Communist party
A political party described as a Communist party includes those that advocate the application of the social principles of communism through a communist form of government...
, and joined the Red Army
Red Army
The Workers' and Peasants' Red Army started out as the Soviet Union's revolutionary communist combat groups during the Russian Civil War of 1918-1922. It grew into the national army of the Soviet Union. By the 1930s the Red Army was among the largest armies in history.The "Red Army" name refers to...
.

Nagy returned to Hungary
Hungary
Hungary , officially the Republic of Hungary , is a landlocked country in Central Europe. It is situated in the Carpathian Basin and is bordered by Slovakia to the north, Ukraine and Romania to the east, Serbia and Croatia to the south, Slovenia to the southwest and Austria to the west. The...
in 1921. In 1930 he travelled to the Soviet Union
Soviet Union
The Soviet Union , officially the Union of Soviet Socialist Republics , was a constitutionally socialist state that existed in Eurasia between 1922 and 1991....
and joined the communist party
Communist party
A political party described as a Communist party includes those that advocate the application of the social principles of communism through a communist form of government...
. He was engaged in agricultural research, and also worked in the Hungarian section of the Comintern
Comintern
The Communist International, abbreviated as Comintern, also known as the Third International, was an international communist organization initiated in Moscow during March 1919...
. He was expelled from the party in 1936 and later worked for the Soviet Statistical Service. Rumours that he was an agent of the Soviet secret service surfaced later, begun by Hungarian party-leader Károly Grósz
Károly Grósz
Károly Grósz was a Hungarian communist politician.Grósz was born in Miskolc, Hungary. He joined the Communist Party in 1945 at the age of 14. Soon the Communists had established a regime in Hungary, and Grósz rose through the party ranks, becoming an important party leader in his native region...
in 1989 in an attempt to discredit Nagy. There is evidence, however, that Nagy did serve as an informant for the NKVD
NKVD
The People's Commissariat for Internal Affairs was the public and secret police organization of the Soviet Union that directly executed the rule of power of the Soviets, including political repression, during the era of Joseph Stalin....
during his time in Moscow and provided names to the secret police as a way to prove his loyalty (not an uncommon tactic for foreign communists in the Soviet Union at the time).

After the war Nagy returned to Hungary
Hungary
Hungary , officially the Republic of Hungary , is a landlocked country in Central Europe. It is situated in the Carpathian Basin and is bordered by Slovakia to the north, Ukraine and Romania to the east, Serbia and Croatia to the south, Slovenia to the southwest and Austria to the west. The...
. He was the Minister of Agriculture in the government of Béla Miklós de Dálnok
Béla Miklós
Knight Béla Miklós de Dálnok was a Hungarian military officer and politician who served as acting Prime Minister of Hungary, at first in opposition, and then officially, from 1944 to 1945.-Early career:...
, delegated by the Hungarian Communist Party. He distributed land among the peasant population. In the next government, led by Tildy
Zoltán Tildy
Zoltán Tildy , was an influential leader of Hungary, who served as Prime Minister from 1945–1946 and President from 1946-1948 in the post-war period before the seizure of power by Soviet-backed communists....
, he was the Minister of Interior. At this period he played an active role controlling the expulsion of Germans
Expulsion of Germans after World War II
The later stages of World War II, and the period after the end of that war, saw the forced migration of millions of German nationals and ethnic Germans from various European states and territories, mostly into the areas which would become post-war Germany and post-war Austria...
.

In the Communist government, he served as Minister of Agriculture and in other posts. He was also Speaker of the National Assembly of Hungary 1947–1949.

On 1 November, he announced Hungary's withdrawal from the Warsaw Pact
Warsaw Pact
The Warsaw Treaty Organization of Friendship, Cooperation, and Mutual Assistance , or more commonly referred to as the Warsaw Pact, was a mutual defense treaty subscribed to by eight communist states in Eastern Europe...
and appealed through the UN for the great powers, such as the United States
United States
The United States of America is a federal constitutional republic comprising fifty states and a federal district...
and the United Kingdom
United Kingdom
The United Kingdom of Great Britain and Northern IrelandIn the United Kingdom and Dependencies, other languages have been officially recognised as legitimate autochthonous languages under the European Charter for Regional or Minority Languages...
, to recognize Hungary's status as a neutral state. Throughout this period, Nagy remained steadfastly committed to Marxism; but his conception of Marxism was as "a science that cannot remain static", and he railed against the "rigid dogmatism" of "the Stalinist monopoly".

When the revolution was crushed by the Soviet invasion of Hungary, Nagy, with a few others, was given sanctuary in the Yugoslav Embassy
Embassy of Serbia in Budapest
The Serbian Embassy in Budapest is Serbia's diplomatic mission to Hungary. It is located at 1068, Dózsa György út 92/b, Budapest, Hungary.The current Serbian ambassador to Hungary is Dejan Šahović.- History :...
. In spite of a written safe conduct of free passage by János Kádár
János Kádár
János Kádár was a Hungarian communist leader and the General Secretary of the Hungarian Socialist Workers' Party, presiding over the country from 1956 until his forced retirement in 1988. His thirty-two year term as General Secretary makes Kádár the longest ruler of the People's Republic of Hungary...
, on 22 November, Nagy was arrested by the Soviet forces as he was leaving the Yugoslav Embassy, and taken to Snagov
Snagov
Snagov is a commune, located 40 km north of Bucharest in Ilfov County, Romania. According to the 2002 census, 99.2% of the population is ethnic Romanian and 0.4% are Roma...
, Romania
Communist Romania
Communist Romania was the period in Romanian history when that country was a Soviet-aligned communist state in the Eastern Bloc, with the dominant role of Romanian Communist Party enshrined in its successive constitutions...
.

Subsequently, the Soviets returned him to Hungary, where he was secretly charged with organizing to overthrow the Hungarian people's democratic state and with treason. Nagy was secretly tried, found guilty, sentenced to death and executed by hanging in June 1958. His trial and execution were made public only after the sentence was carried out. According to Fedor Burlatsky, a Kremlin
Kremlin
A kremlin , same root as in kremen is a major fortified central complex found in historic Russian cities. This word is often used to refer to the best-known one, the Moscow Kremlin, or metonymically to the government that is based there...
insider, Nikita Khrushchev
Nikita Khrushchev
Nikita Sergeyevich Khrushchev led the Soviet Union during part of the Cold War. He served as First Secretary of the Communist Party of the Soviet Union from 1953 to 1964, and as Chairman of the Council of Ministers, or Premier, from 1958 to 1964...
had Nagy executed, "as a lesson to all other leaders in socialist countries."

He was buried along with his co-defendants in the prison yard where the executions were carried out and years later moved to a distant corner (section 301) of the Municipal Cemetery of Budapest., face-down, and with his hands and feet tied with a barbed wire
Barbed wire
Barbed wire, also known as barb wire , is a type of fencing wire constructed with sharp edges or points arranged at intervals along the strand. It is used to construct inexpensive fences and is used atop walls surrounding secured property...
. Next to his grave stands a memorial bell inscribed in Latin
Latin
Latin is an Italic language originally spoken in Latium and Ancient Rome. It, along with most European languages, is a descendant of the ancient Proto-Indo-European language. Although it is considered a dead language, a number of scholars and members of the Christian clergy speak it fluently, and...
, Hungarian, German and English. The Latin reads: "Vivos voco / Mortuos plango / Fulgura frango," which is translated as: "I call the living, I mourn the dead, I master (lit. "break") the lightning."

During the time when the Communist leadership of Hungary would not permit his death to be commemorated, or permit access to his burial place, a cenotaph
Cenotaph
A cenotaph is an "empty tomb" or a monument erected in honour of a person or group of people whose remains are elsewhere. It can also be the initial tomb for a person who has since been interred elsewhere. The word derives from the Greek κενοτάφιον = kenotaphion...
in his honor was erected in Père Lachaise Cemetery
Père Lachaise Cemetery
Père Lachaise Cemetery is the largest cemetery in the city of Paris, France , though there are larger cemeteries in the city's suburbs.Père Lachaise is in the 20th arrondissement, and is reputed to be the world's most-visited cemetery, attracting hundreds of thousands of visitors annually to the...
in Paris.

In 1989, Imre Nagy was rehabilitated and his remains reburied on the 31st anniversary of his execution in the same plot after a funeral organized in part by opponents of the country's communist regime. Over 100,000 people are estimated to have attended Nagy's reinterment. The occasion of Nagy's funeral was an important factor in the end of the Communist government in Hungary.

The collected writings of Nagy, most of which he wrote after his dismissal as Chairman of the Council of Ministers in April 1955, were smuggled out of Hungary and published in the West under the title "Imre Nagy on Communism".

Nagy was married to Mária Égető. The couple had one daughter, Erzsébet Nagy
Erzsébet Nagy
Erzsébet Nagy was a Hungarian writer and translator, and the only child of the former Prime Minister of Hungary, Imre Nagy, who was executed following the failed Hungarian Revolution of 1956.-Early life:...
(1927–2008), a Hungarian writer and translator
Translation
Translation is the communication of the meaning of a source-language text by means of an equivalent target-language text. Whereas interpreting undoubtedly antedates writing, translation began only after the appearance of written literature; there exist partial translations of the Sumerian Epic of...
. Erzsébet Nagy married Ferenc Jánosi. Imre Nagy did not object to his daughter's romance and eventual marriage to a Protestant minister, attending their religious wedding ceremony in 1946 without Politburo permission. In 1982, Erzsébet Nagy married János Vészi.


Nagy in film and the arts

In 2003 and 2004, the Hungarian director Márta Mészáros
Márta Mészáros
Márta Mészáros is a Hungarian film director. She worked as an English Teachersmeaning? filmmaker in the 1960s, but in the following decade began making films drawing on the oppression of both state and gender...
produced a film based on Nagy's life after the revolution, entitled A Temetetlen halott (English: The Unburied Body) (IMDb entry).

Nagy is mentioned and seen in the movie Children of Glory
Children of Glory
-Synopsis:Children of Glory commemorates Hungary's Revolution of 1956 and the Blood in the Water match. Taking place in Budapest and at the Melbourne Olympic Games in October and November of that year, the film takes viewers into the passion and sadness of one of the most dramatic popular revolts...
.