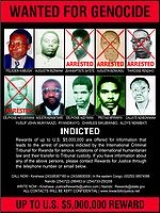 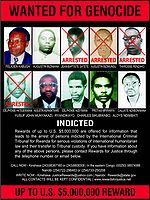 The tribunal has jurisdiction over genocide
Genocide
Genocide is defined as "the deliberate and systematic destruction, in whole or in part, of an ethnic, racial, religious, or national group", though what constitutes enough of a "part" to qualify as genocide has been subject to much debate by legal scholars...
, crimes against humanity and war crimes, which are defined as violations of Common Article Three and Additional Protocol II of the Geneva Conventions
Geneva Conventions
The Geneva Conventions comprise four treaties, and three additional protocols, that establish the standards of international law for the humanitarian treatment of the victims of war...
(dealing with war crimes committed during internal conflicts).

So far, the tribunal has finished 50 trials and convicted 29 accused persons. Another 11 trials are in progress. 14 individuals are awaiting trial in detention; but the prosecutor intends to transfer 5 to national jurisdiction for trial. 13 others are still at large, some suspected to be dead. The first trial, of Jean-Paul Akayesu
Jean Akayesu
Jean-Paul Akayesu is a former teacher, school inspector, and Mouvement Démocratique Républicain politician from Rwanda. He served as mayor of Taba commune from April 1993 until June 1994....
, began in 1997. Jean Kambanda
Jean Kambanda
Jean Kambanda was the Prime Minister in the caretaker government of Rwanda from the start of the 1994 Rwandan Genocide...
, interim Prime Minister, pleaded guilty. According to the ICTR's Completion Strategy, in accordance with Security Council Resolution 1503
United Nations Security Council Resolution 1503
United Nations Security Council Resolution 1503, adopted unanimously on August 28, 2003, after recalling resolutions 827 , 955 , 978 , 1165 , 1166 , 1329 , 1411 , 1431 and 1481 , the Council decided to split the prosecutorial duties of the International Criminal Tribunal for the former Yugoslavia ...
, all first-instance cases were to have completed trial by the end of 2008 (this date was later extended to the end of 2009) and all work is to be completed by 2010. It has recently been discussed that these goals may not be realistic and are likely to change. The United Nations Security Council called upon the tribunal to finish its work by 31 December 2014 to prepare for its closure and transfer of its responsibilities to the International Residual Mechanism for Criminal Tribunals
International Residual Mechanism for Criminal Tribunals
The International Residual Mechanism for Criminal Tribunals is a mechanism established by United Nations Security Council resolution 1966 to finish the work begun by the International Tribunal for the former Yugoslavia and the International Criminal Tribunal for Rwanda . It will be subdivided...
which will begin functioning for the ICTR branch on 1 July 2012.

In March 2010, the ICTR announced plans to digitize all video recordings of the trials, both audio and video, in all three languages (English, French, Kinyarwanda). This is part of a larger project that included digitizing audio recordings.

The trial of Jean-Paul Akayesu established precedent
Precedent
In common law legal systems, a precedent or authority is a principle or rule established in a legal case that a court or other judicial body may apply when deciding subsequent cases with similar issues or facts...
that rape
Rape
Rape is a type of sexual assault usually involving sexual intercourse, which is initiated by one or more persons against another person without that person's consent. The act may be carried out by physical force, coercion, abuse of authority or with a person who is incapable of valid consent. The...
is a crime of genocide. "...the [Trial] Chamber finds that in most cases, the rapes of Tutsi women in Taba, were accompanied with the intent to kill those women. ... In this respect, it appears clearly to the chamber that the acts of rape and sexual violence, as other acts of serious bodily and mental harm committed against the Tutsi, reflected the determination to make Tutsi women suffer and to mutilate them even before killing them, the intent being to destroy the Tutsi group while inflicting acute suffering on its members in the process." Presiding judge Navanethem Pillay said in a statement after the verdict: "From time immemorial, rape has been regarded as spoils of war. Now it will be considered a war crime. We want to send out a strong message that rape is no longer a trophy of war."

The trial against "hate media" began on 23 October 2000. It is charged with the prosecution of the media which encouraged the genocide of 1994.

No prosecutions have been brought against the founders, sponsors or anyone related to Radio Muhabura, a media whose pro-RPF
Rwandan Patriotic Front
The Rwandan Patriotic Front abbreviated as RPF is the current ruling political party of Rwanda, led by President Paul Kagame. It governs in a coalition with other parties...
messages were broadcast throughout the country during the 1990-1994 war.

The tribunal consists of 16 judges in four "chambers" - three to hear trials, and one to hear appeals. In addition, there are 9 ad litem
Ad litem
Ad litem is a term used in law to refer to a party appointed by a court to act in a lawsuit on behalf of another party—for instance, a child or an incapacitated adult—who is deemed incapable of representing him or herself...
judges, making 25 in all. At present, all 9 ad litem judges are assigned to Chambers II and III. There is an additional pool of 9 further ad litem judges who may be called on in the case of a judge being absent.


Office of the Prosecutor

The Office of the Prosecutor is divided into two Sections:

Hassan Bubacar Jallow
Hassan Bubacar Jallow
Hassan Bubacar Jallow is a Gambian lawyer, politician, and jurist and has been the Prosecutor of the International Criminal Tribunal for Rwanda since 2003....
of The Gambia
The Gambia
The Republic of The Gambia, commonly referred to as The Gambia, or Gambia , is a country in West Africa. Gambia is the smallest country on mainland Africa, surrounded by Senegal except for a short coastline on the Atlantic Ocean in the west....
is the current prosecutor. He has previously served as The Gambia's Attorney-General and Minister of Justice from 1984 to 1994, and subsequently as a Judge of Supreme Court of The Gambia from 1998 to 2002. He was appointed by the Security Council on September 15, 2003 to replace Carla Del Ponte
Carla Del Ponte
Carla Del Ponte is a former Chief Prosecutor of two United Nations international criminal law tribunals. A former Swiss attorney general, she was appointed prosecutor for the International Criminal Tribunal for the former Yugoslavia and the International Criminal Tribunal for Rwanda in August...
.

The Registry is responsible for the overall administration and management of the ICTR. It also performs other legal functions assigned to it by the Tribunal’s Rules of Procedure and Evidence, and is the Tribunal’s channel of communication.

French investigating magistrate Jean-Louis Bruguière
Jean-Louis Bruguière
Jean-Louis Bruguière was the leading French investigating magistrate in charge of counter-terrorism affairs. He was appointed in 2004 vice-president of the Paris Court of Serious Claims . He has garnered controversy for various acts, including the indictment of Rwandan president Paul Kagame for the...
is also pursuing a case against the current President, Paul Kagame
Paul Kagame
Paul Kagame is the sixth and current President of the Republic of Rwanda. He rose to prominence as the leader of the Rwandan Patriotic Front , whose victory over the incumbent government in July 1994 effectively ended the Rwandan genocide...
, and other members of his administration, for the assassination of his predecessor. This case is under the regular jurisdiction of the French courts because French citizens were also killed in the plane crash.

To date the ICTR has indicted 92 individuals. Two individuals are in detention awaiting trial, one of whom is appealing his transfer to Rwanda after the case against him was referred to the Rwandan justice system. Additionally, five individuals are currently on trial, 19 are appealing their sentences, eight have been acquitted and released from detention, and two are awaiting the appeal of their acquittals. Proceedings against four individuals were terminated after two died and after indictments against two were withdrawn. The cases against two individuals were transferred to national jurisdictions. The Tribunal has finished proceedings against 29 individuals who are currently serving prison sentences, nine who have finished their sentences and have been released, and three who have died while serving prison sentences. Nine individuals remain at large as fugitives.