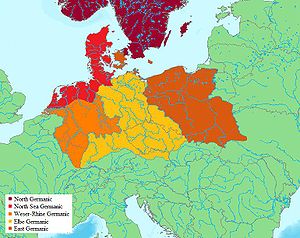 Ingvaeonic ˌɪŋviːˈɒnɪk, also known as North Sea Germanic, is a postulated grouping of the West Germanic languages
West Germanic languages
The West Germanic languages constitute the largest of the three traditional branches of the Germanic family of languages and include languages such as German, English, Dutch, Afrikaans, the Frisian languages, and Yiddish...
that comprises Old Frisian
Old Frisian
Old Frisian is a West Germanic language spoken between the 8th and 16th centuries in the area between the Rhine and Weser on the European North Sea coast. The Frisian settlers on the coast of South Jutland also spoke Old Frisian but no medieval texts of this area are known...
, Old English
Old English language
Old English or Anglo-Saxon is an early form of the English language that was spoken and written by the Anglo-Saxons and their descendants in parts of what are now England and southeastern Scotland between at least the mid-5th century and the mid-12th century...
and Old Saxon
Old Saxon
Old Saxon, also known as Old Low German, is the earliest recorded form of Low German, documented from the 8th century until the 12th century, when it evolved into Middle Low German. It was spoken on the north-west coast of Germany and in the Netherlands by Saxon peoples...
.

Ingvaeonic is named after the Ingaevones
Ingaevones
The Ingaevones or, as Pliny has it, apparently more accurately, Ingvaeones , as described in Tacitus's Germania, written c. 98 AD, were a West Germanic cultural group living along the North Sea coast in the areas of Jutland, Holstein, Frisia and the Danish islands, where they had by the 1st...
, a West Germanic cultural group or proto-tribe along the North Sea
North Sea
In the southwest, beyond the Straits of Dover, the North Sea becomes the English Channel connecting to the Atlantic Ocean. In the east, it connects to the Baltic Sea via the Skagerrak and Kattegat, narrow straits that separate Denmark from Norway and Sweden respectively...
coast. It is not thought of as a monolithic proto-language
Proto-language
A proto-language in the tree model of historical linguistics is the common ancestor of the languages that form a language family. Occasionally, the German term Ursprache is used instead.Often the proto-language is not known directly...
, but rather as a group of closely related dialects that underwent several areal changes in relative unison.

Linguistic evidence for Ingvaeonic are common innovations observed in Old Frisian, Old English and Old Saxon such as the following: