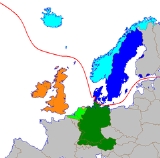 Encyclopedia
The Anglo-Frisian languages (also known as North Sea Germanic or Ingvaeonic) form a group of West Germanic languages
West Germanic languages
The West Germanic languages constitute the largest of the three traditional branches of the Germanic family of languages and include languages such as German, English, Dutch, Afrikaans, the Frisian languages, and Yiddish...
consisting of Old English
Old English language
Old English or Anglo-Saxon is an early form of the English language that was spoken and written by the Anglo-Saxons and their descendants in parts of what are now England and southeastern Scotland between at least the mid-5th century and the mid-12th century...
, Old Frisian
Old Frisian
Old Frisian is a West Germanic language spoken between the 8th and 16th centuries in the area between the Rhine and Weser on the European North Sea coast. The Frisian settlers on the coast of South Jutland also spoke Old Frisian but no medieval texts of this area are known...
, and their descendants. The Anglo-Frisian family tree is:
The Anglo-Frisian languages are distinguished from other West Germanic languages partially by the Ingvaeonic nasal spirant law
Ingvaeonic nasal spirant law
In historical linguistics, the Ingvaeonic nasal spirant law is a description of a phonological development in some dialects of West Germanic, which is attested in Old English, Old Frisian, and Old Saxon...
, Anglo-Frisian brightening, and by the palatalization
Palatalization
In linguistics, palatalization , also palatization, may refer to two different processes by which a sound, usually a consonant, comes to be produced with the tongue in a position in the mouth near the palate....
of Proto-Germanic
Proto-Germanic language
Proto-Germanic , or Common Germanic, as it is sometimes known, is the unattested, reconstructed proto-language of all the Germanic languages, such as modern English, Frisian, Dutch, Afrikaans, German, Luxembourgish, Danish, Norwegian, Icelandic, Faroese, and Swedish.The Proto-Germanic language is...
* to a coronal
Coronal consonant
Coronal consonants are consonants articulated with the flexible front part of the tongue. Only the coronal consonants can be divided into apical , laminal , domed , or subapical , as well as a few rarer orientations, because only the front of the tongue has such...
affricate
Affricate consonant
Affricates are consonants that begin as stops but release as a fricative rather than directly into the following vowel.- Samples :...
before front vowels, e.g.
The early Anglo-Frisian and Old Saxon
Old Saxon
Old Saxon, also known as Old Low German, is the earliest recorded form of Low German, documented from the 8th century until the 12th century, when it evolved into Middle Low German. It was spoken on the north-west coast of Germany and in the Netherlands by Saxon peoples...
speech communities lived close enough together to form a linguistic crossroads
Sprachbund
A Sprachbund – also known as a linguistic area, convergence area, diffusion area or language crossroads – is a group of languages that have become similar in some way because of geographical proximity and language contact. They may be genetically unrelated, or only distantly related...
which is why they share some of the traits otherwise only typical of Anglo-Frisian languages. However, despite their common origins, Anglic and Frisian have become very divergent, largely due to the heavy Norse and French influences on English and similarly heavy Dutch and Low German influences on Frisian. The result is that Frisian has now far more in common with Dutch
Dutch language
Dutch is a West Germanic language and the native language of the majority of the population of the Netherlands, Belgium, and Suriname, the three member states of the Dutch Language Union. Most speakers live in the European Union, where it is a first language for about 23 million and a second...
and the adjacent Low German dialects, bringing it into the West Germanic dialect continuum
Dialect continuum
A dialect continuum, or dialect area, was defined by Leonard Bloomfield as a range of dialects spoken across some geographical area that differ only slightly between neighboring areas, but as one travels in any direction, these differences accumulate such that speakers from opposite ends of the...
, whereas Anglic has essentially become a half-Germanic language isolate.

The following is a summary of the major sound changes affecting vowels in chronological order: