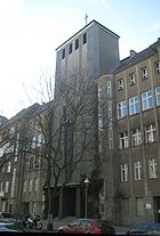 Encyclopedia
The Independent Evangelical-Lutheran Church is a confessional
Confessional Lutheran
Confessional Lutheran is a name used by certain Lutheran Christians to designate themselves as those who accept the doctrines taught in the Book of Concord of 1580 in their entirety, because they believe them to be completely faithful to the teachings of the Bible...
Lutheran church body of Germany
Germany
Germany , officially the Federal Republic of Germany , is a federal parliamentary republic in Europe. The country consists of 16 states while the capital and largest city is Berlin. Germany covers an area of 357,021 km2 and has a largely temperate seasonal climate...
. It is a member of the European Lutheran Conference and a member of the International Lutheran Council
International Lutheran Council
The International Lutheran Council is a worldwide association of confessional Lutheran denominations. It is to be distinguished from the larger Lutheran World Federation, which is an association of the more theologically moderate to liberal Lutheran churches, all of which are in full communion with...
(ILC) (of which the Lutheran Church - Missouri Synod
Lutheran Church - Missouri Synod
The Lutheran Church–Missouri Synod is a traditional, confessional Lutheran denomination in the United States. With 2.3 million members, it is both the eighth largest Protestant denomination and the second-largest Lutheran body in the U.S. after the Evangelical Lutheran Church in America. The Synod...
of North America is also a member). The SELK synod has about 36,000 members in 200 congregations. The seat of SELK is in Hanover
Hanover
Hanover or Hannover, on the river Leine, is the capital of the federal state of Lower Saxony , Germany and was once by personal union the family seat of the Hanoverian Kings of Great Britain, under their title as the dukes of Brunswick-Lüneburg...
.

In 1817, King Frederick William III
Frederick William III of Prussia
Frederick William III was king of Prussia from 1797 to 1840. He was in personal union the sovereign prince of the Principality of Neuchâtel .-Early life:...
of Prussia
Prussia
Prussia was a German kingdom and historic state originating out of the Duchy of Prussia and the Margraviate of Brandenburg. For centuries, the House of Hohenzollern ruled Prussia, successfully expanding its size by way of an unusually well-organized and effective army. Prussia shaped the history...
ordered the Lutheran and Reformed churches in his territory to unite, forming the Evangelical Church of the Prussian Union
Prussian Union (Evangelical Christian Church)
The Prussian Union was the merger of the Lutheran Church and the Reformed Church in Prussia, by a series of decrees – among them the Unionsurkunde – by King Frederick William III...
, a predecessor to today's Evangelical Church in Germany
Evangelical Church in Germany
The Evangelical Church in Germany is a federation of 22 Lutheran, Unified and Reformed Protestant regional church bodies in Germany. The EKD is not a church in a theological understanding because of the denominational differences. However, the member churches share full pulpit and altar...
. As the uniting of Lutheran and Reformed Christians in Germany proceeded, some Lutheran groups dissented and formed independent churches, especially in Prussia, Saxony, Hannover and Hesse. These Lutherans held that Reformed doctrine and Lutheran doctrine are contradictory on many points (especially on the nature of the Real Presence
Real Presence
Real Presence is a term used in various Christian traditions to express belief that in the Eucharist, Jesus Christ is really present in what was previously just bread and wine, and not merely present in symbol, a figure of speech , or by his power .Not all Christian traditions accept this dogma...
of Christ in the Lord's Supper
Eucharist
The Eucharist , also called Holy Communion, the Sacrament of the Altar, the Blessed Sacrament, the Lord's Supper, and other names, is a Christian sacrament or ordinance...
), and that such doctrinal differences precluded altar fellowship.

In 1972 most of the Confessional Lutheran Church bodies in West Germany united to form the SELK. In 1991 the East German Evangelisch-Lutherische (altlutherische) Kirche (the Evangelical-Lutheran (Old-Lutheran) Church) joined the SELK.

The SELK bases its teaching on the Bible, consisting of the Old and New Testaments, which it confesses to be God's inerrant and infallible Word. The specific doctrines taught in the SELK are contained the Book of Concord
Book of Concord
The Book of Concord or Concordia is the historic doctrinal standard of the Lutheran Church, consisting of ten credal documents recognized as authoritative in Lutheranism since the 16th century...
, to which SELK pastors profess a "quia" subscription, meaning that they subscribe to them, "quia" (because) they correspond to the Bible. These Confessions are:

The bishop of the SELK is elected by the synod. The current bishop ist Hans-Jörg Voigt. The main office of the SELK is in Hannover, and is managed by the executive dean Michael Schätzel. The SELK is divided in four main districts, with a provost heading each one. These four districts are divided again in sub-districts, each in turn led by a superintendent
Superintendent (ecclesiastical)
Superintendent is the head of an administrative division of a Protestant church, largely historical but still in use in Germany.- Superintendents in Sweden :...
.

The mission outreach of SELK is led by its mission society in Bleckmar in Lower Saxony near Celle, called Lutherische Kirchenmission (Bleckmarer Mission) e. V. They missionaries and projects in South-Africa, Botswana, Germany and Brasila.

The theological seminary is in Oberursel, near Frankurt/Main. All SELK pastors have to make a part of their studies there. The professors are pastors of SELK. The seminary is accepted by the German state.

For different aspects of church life SELK has a lot of other institutions like an institution for youth, church music, worship service for children, liturgy commission, commission for church education and lot of more.

Full communion and fellowship has SELK with those confessional Lutheran churches, which have the same teaching and Lutheran doctrine, for example:

With same Lutheran churches in Eastern Europe SELK has a contract about partnership relations: