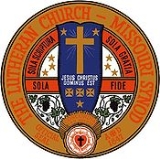 Overview
The Lutheran Church–Missouri Synod (LCMS) is a traditional
Conservative Christianity
Conservative Christianity is a term applied to a number of groups or movements seen as giving priority to traditional Christian beliefs and practices...
, confessional Lutheran
Confessional Lutheran
Confessional Lutheran is a name used by certain Lutheran Christians to designate themselves as those who accept the doctrines taught in the Book of Concord of 1580 in their entirety, because they believe them to be completely faithful to the teachings of the Bible...
denomination
Christian denomination
A Christian denomination is an identifiable religious body under a common name, structure, and doctrine within Christianity. In the Orthodox tradition, Churches are divided often along ethnic and linguistic lines, into separate churches and traditions. Technically, divisions between one group and...
in the United States. With 2.3 million members, it is both the eighth largest Protestant
Protestantism
Protestantism is one of the three major groupings within Christianity. It is a movement that began in Germany in the early 16th century as a reaction against medieval Roman Catholic doctrines and practices, especially in regards to salvation, justification, and ecclesiology.The doctrines of the...
denomination and the second-largest Lutheran
Lutheranism
Lutheranism is a major branch of Western Christianity that identifies with the theology of Martin Luther, a German reformer. Luther's efforts to reform the theology and practice of the church launched the Protestant Reformation...
body in the U.S. after the Evangelical Lutheran Church in America
Evangelical Lutheran Church in America
The Evangelical Lutheran Church in America is a mainline Protestant denomination headquartered in Chicago, Illinois. The ELCA officially came into existence on January 1, 1988, by the merging of three churches. As of December 31, 2009, it had 4,543,037 baptized members, with 2,527,941 of them...
. The Synod
Synod
A synod historically is a council of a church, usually convened to decide an issue of doctrine, administration or application. In modern usage, the word often refers to the governing body of a particular church, whether its members are meeting or not...
was founded at Chicago
Chicago
Chicago is the largest city in the US state of Illinois. With nearly 2.7 million residents, it is the most populous city in the Midwestern United States and the third most populous in the US, after New York City and Los Angeles...
, Illinois, in 1847 by German-American immigrants
German American
German Americans are citizens of the United States of German ancestry and comprise about 51 million people, or 17% of the U.S. population, the country's largest self-reported ancestral group...
. The LCMS is headquartered in St. Louis, Missouri.

Approximately half of the LCMS members are located in the Upper Midwest
Upper Midwest
The Upper Midwest is a region in the northern portion of the U.S. Census Bureau's Midwestern United States. It is largely a sub-region of the midwest. Although there are no uniformly agreed-upon boundaries, the region is most commonly used to refer to the states of Minnesota, Wisconsin, and...
, although it is represented in all 50 U.S. state
U.S. state
A U.S. state is any one of the 50 federated states of the United States of America that share sovereignty with the federal government. Because of this shared sovereignty, an American is a citizen both of the federal entity and of his or her state of domicile. Four states use the official title of...
s, and is affiliated with other Lutheran sister churches worldwide.

Does God "say" that even those who have no knowledge of him, such as babies, people in remote places, all the people who have dies before knowing of G...
More

My husband feels that regular church attendance is not necessary at age 65. He is a baptized member of the Lutheran Church - Missouri Synod. We were...

Is the Lutheran Church--Missouri a church?

With so much against religion, our rights to the freedom of it; per the Constitution and the attacks against those of us that believe, why is the Luth...
More
x