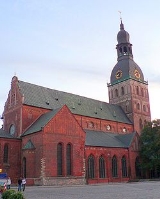 Encyclopedia
The Evangelical Lutheran Church of Latvia is a Lutheran
Lutheranism
Lutheranism is a major branch of Western Christianity that identifies with the theology of Martin Luther, a German reformer. Luther's efforts to reform the theology and practice of the church launched the Protestant Reformation...
Protestant church in Latvia
Latvia
Latvia , officially the Republic of Latvia , is a country in the Baltic region of Northern Europe. It is bordered to the north by Estonia , to the south by Lithuania , to the east by the Russian Federation , to the southeast by Belarus and shares maritime borders to the west with Sweden...
. Latvia's Lutheran heritage dates back to the Reformation
Protestant Reformation
The Protestant Reformation was a 16th-century split within Western Christianity initiated by Martin Luther, John Calvin and other early Protestants. The efforts of the self-described "reformers", who objected to the doctrines, rituals and ecclesiastical structure of the Roman Catholic Church, led...
. Both the Nazi and communist regimes persecuted the church harshly before religious freedom returned to Latvia in 1988.

The Church is governed by a Consistory composed of clergy and laity elected by the synod. The Archbishop
Archbishop
An archbishop is a bishop of higher rank, but not of higher sacramental order above that of the three orders of deacon, priest , and bishop...
serves as its president. Archbishop Jānis Vanags
Janis Vanags
Jānis Vanags is the archbishop of the Evangelical Lutheran Church of Latvia . Vanags is seen as a "conservative" on theological or moral issues and opposed women's ordination as well as homosexuality...
, first elected in 1993 at a special synod
Synod
A synod historically is a council of a church, usually convened to decide an issue of doctrine, administration or application. In modern usage, the word often refers to the governing body of a particular church, whether its members are meeting or not...
meeting following the death of Archbishop Kārlis Gailītis in 1992, was consecrated bishop on August 29, 1993, by the Archbishop of the Lutheran Church of Sweden
Church of Sweden
The Church of Sweden is the largest Christian church in Sweden. The church professes the Lutheran faith and is a member of the Porvoo Communion. With 6,589,769 baptized members, it is the largest Lutheran church in the world, although combined, there are more Lutherans in the member churches of...
.

Church is divided in three diocese
Diocese
A diocese is the district or see under the supervision of a bishop. It is divided into parishes.An archdiocese is more significant than a diocese. An archdiocese is presided over by an archbishop whose see may have or had importance due to size or historical significance...
s: Archdiocese of Riga supervised by Archbishop of Riga and since 10 April 2010 with suffragan bishop; diocese of Liepāja
Liepaja
Liepāja ; ), is a republican city in western Latvia, located on the Baltic Sea directly at 21°E. It is the largest city in the Kurzeme Region of Latvia, the third largest city in Latvia after Riga and Daugavpils and an important ice-free port...
and diocese of Daugavpils
Daugavpils
Daugavpils is a city in southeastern Latvia, located on the banks of the Daugava River, from which the city gets its name. Daugavpils literally means "Daugava Castle". With a population of over 100,000, it is the second largest city in the country after the capital Riga, which is located some...
.

The Evangelical Lutheran Church of Latvia reports as of 2006 that there are 113 pastors and 86 evangelists serving its 293 congregations. In 2009, the estimated baptized membership was 250,000. The Latvian Evangelical Church Abroad has 25,020 baptized members.

The ELCL is a member of the Lutheran World Federation
Lutheran World Federation
The Lutheran World Federation is a global communion of national and regional Lutheran churches headquartered in the Ecumenical Centre in Geneva, Switzerland. The federation was founded in the Swedish city of Lund in the aftermath of the Second World War in 1947 to coordinate the activities of the...
, the World Council of Churches
World Council of Churches
The World Council of Churches is a worldwide fellowship of 349 global, regional and sub-regional, national and local churches seeking unity, a common witness and Christian service. It is a Christian ecumenical organization that is based in the Ecumenical Centre in Geneva, Switzerland...
and the Conference of European Churches
Conference of European Churches
The Conference of European Churches was founded in 1959 to promote reconciliation, dialogue and friendship between the churches of Europe at a time of growing Cold War political tensions and divisions. It is an ecumenical fellowship of Christian churches in Europe; its membership consists of most...
, and is currently negotiating membership in the Porvoo Communion
Porvoo Communion
The Porvoo Communion is a communion of 12 mainly northern European Anglican and Lutheran churches. It was established in 1992 by an agreement entitled the Porvoo Common Statement which establishes full communion between and among the churches...
. ELCL is in full fellowship with the Lutheran Church - Missouri Synod
Lutheran Church - Missouri Synod
The Lutheran Church–Missouri Synod is a traditional, confessional Lutheran denomination in the United States. With 2.3 million members, it is both the eighth largest Protestant denomination and the second-largest Lutheran body in the U.S. after the Evangelical Lutheran Church in America. The Synod...
(LCMS). The ELCL is not in full church fellowship with those LWF member church bodies who practise ordinations and marriages of homosexuals, looking on LWF more as a forum of discussions for Lutherans.

Along with the Church of Sweden, the ELCL claims full apostolic succession
Apostolic Succession
Apostolic succession is a doctrine, held by some Christian denominations, which asserts that the chosen successors of the Twelve Apostles, from the first century to the present day, have inherited the spiritual, ecclesiastical and sacramental authority, power, and responsibility that were...
.