Encyclopedia
There have been many serious incidents during the Hajj
Hajj
The Hajj is the pilgrimage to Mecca, Saudi Arabia. It is one of the largest pilgrimages in the world, and is the fifth pillar of Islam, a religious duty that must be carried out at least once in their lifetime by every able-bodied Muslim who can afford to do so...
(the Muslim
Muslim
A Muslim, also spelled Moslem, is an adherent of Islam, a monotheistic, Abrahamic religion based on the Quran, which Muslims consider the verbatim word of God as revealed to prophet Muhammad. "Muslim" is the Arabic term for "submitter" .Muslims believe that God is one and incomparable...
pilgrimage to the city of Mecca
Mecca
Mecca is a city in the Hijaz and the capital of Makkah province in Saudi Arabia. The city is located inland from Jeddah in a narrow valley at a height of above sea level...
) that in total have caused the loss of thousands of lives. Every follower of Islam
Islam
Islam . The most common are and .   : Arabic pronunciation varies regionally. The first vowel ranges from ~~. The second vowel ranges from ~~~...
is requested to visit Mecca during the Hajj at least once in his or her lifetime, but only if they can afford or able to do so. During the month of the Hajj, Mecca must cope with as many as three million pilgrims.

Jet travel makes Mecca and the Hajj more accessible to pilgrim
Pilgrim
A pilgrim is a traveler who is on a journey to a holy place. Typically, this is a physical journeying to some place of special significance to the adherent of a particular religious belief system...
s from all over the world. As a consequence, the Hajj has become increasingly crowded. City officials are required to control large crowds and provide food, shelter, sanitation, and emergency services for millions. Unfortunately, they have not always been able to prevent disasters. The stoning of the devil
Stoning of the Devil
Stoning of the Devil or stoning of the jamarat is part of the annual Islamic Hajj pilgrimage to the holy city of Mecca in Saudi Arabia. Muslim pilgrims fling pebbles at three walls called jamarat in the city of Mina just east of Mecca. It is one of a series of ritual acts that must be performed in...
ritual is the most dangerous part of the pilgrimage because of the huge crowds, particularly as they cross the massive two-layer flyover-style Jamarat Bridge
Jamarat Bridge
The Jamaraat Bridge is a pedestrian bridge in Mina, Saudi Arabia near Mecca used by Muslims during the stoning of the devil ritual of the Hajj. The bridge was originally constructed in 1963, and has been expanded several times since then. The purpose of the bridge is to enable pilgrims to throw...
that affords access to the pillars.


Stampedes and failures of crowd control 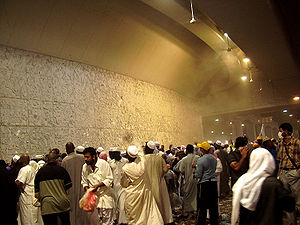 Sometimes the surging crowds, trekking from one station of the pilgrimage to the next, cause a stampede
Stampede
A stampede is an act of mass impulse among herd animals or a crowd of people in which the herd collectively begins running with no clear direction or purpose....
. Panic spreads, pilgrims jostle to avoid being trampled, and hundreds of deaths can occur as a result. The stoning of the devil
Stoning of the Devil
Stoning of the Devil or stoning of the jamarat is part of the annual Islamic Hajj pilgrimage to the holy city of Mecca in Saudi Arabia. Muslim pilgrims fling pebbles at three walls called jamarat in the city of Mina just east of Mecca. It is one of a series of ritual acts that must be performed in...
ceremony is particularly crowded and dangerous. Some notable incidents include:


November 1, 2011: 2 pilgrims, a man and his wife died in a coach fire. There were two coaches in the convoy, and a person in the second coach noticed smoke billowing from the coach in front. He radioed the driver to stop. Everybody evacuated the coach, and as the last two were getting out, the coach exploded three times. They were Abu Talha Dawood Burbank and his wife from Birmingham
Birmingham
Birmingham is a city and metropolitan borough in the West Midlands of England. It is the most populous British city outside the capital London, with a population of 1,036,900 , and lies at the heart of the West Midlands conurbation, the second most populous urban area in the United Kingdom with a...
, United Kingdom
United Kingdom
The United Kingdom of Great Britain and Northern IrelandIn the United Kingdom and Dependencies, other languages have been officially recognised as legitimate autochthonous languages under the European Charter for Regional or Minority Languages...
, who had just landed in Jeddah en route to Macca. Their funerals were held in the Grand Holy Mosque (Al Haraam) and laid to rest in the nearby cemetery.

Mingling of visitors from many countries, some of which have poor health care systems still plagued by preventable infectious diseases, can lead to the spread of epidemic
Epidemic
In epidemiology, an epidemic , occurs when new cases of a certain disease, in a given human population, and during a given period, substantially exceed what is expected based on recent experience...
s. If an outbreak were to occur on the road to Mecca, pilgrims could exacerbate the problem when they returned home and passed their infection on to others. This was more of a problem in the past. One such disease, which has prompted response from the Saudi government, is meningitis
Meningitis
Meningitis is inflammation of the protective membranes covering the brain and spinal cord, known collectively as the meninges. The inflammation may be caused by infection with viruses, bacteria, or other microorganisms, and less commonly by certain drugs...
as it became a primary concern after an international outbreak following the Hajj in 1987. Due to post-Hajj outbreaks globally of certain types of meningitis in previous years, it is now a visa
Visa (document)
A visa is a document showing that a person is authorized to enter the territory for which it was issued, subject to permission of an immigration official at the time of actual entry. The authorization may be a document, but more commonly it is a stamp endorsed in the applicant's passport...
requirement to be immunised with the ACW135Y
Neisseria meningitidis
Neisseria meningitidis, often referred to as meningococcus, is a bacterium that can cause meningitis and other forms of meningococcal disease such as meningococcemia, a life threatening sepsis. N. meningitidis is a major cause of morbidity and mortality during childhood in industrialized countries...
vaccine
Vaccine
A vaccine is a biological preparation that improves immunity to a particular disease. A vaccine typically contains an agent that resembles a disease-causing microorganism, and is often made from weakened or killed forms of the microbe or its toxins...
before arrival. Every year, the Saudi government publishes a list of required vaccines for pilgrims, which for 2010 also includes yellow fever
Yellow fever
Yellow fever is an acute viral hemorrhagic disease. The virus is a 40 to 50 nm enveloped RNA virus with positive sense of the Flaviviridae family....
, polio, and influenza.

A concrete multi-story building located in Mecca close to the Grand Mosque collapsed on January 5, 2006. The building, the Al-Ghaza Hotel, is said to have housed a restaurant, a convenience store, and a hostel. The hostel was reported to have been housing pilgrims to the 2006 Hajj. It is not clear how many pilgrims were in the hotel at the time of the collapse. As of latest reports, the death toll is 76 and the number of injured is 64.

Of late, pickpocketing
Pickpocketing
Pickpocketing is a form of larceny that involves the stealing of money or other valuables from the person of a victim without their noticing the theft at the time. It requires considerable dexterity and a knack for misdirection...
has created numerous problems for Hajj pilgrims. According to the Save Madina Foundation, among Indians alone, 321 were victims of pickpocketing during Hajj in 2010.

One of the biggest steps, which is also controversial, is a new system of registrations, passports, and travel visas to control the flow of pilgrims. This system is designed to encourage and accommodate first-time visitors to Mecca, while restricting repeat visits. Pilgrims who have the means and desire to perform the Hajj several times have protested what they see as discrimination, but the Hajj Commission has stated that they see no alternative if further tragedies are to be prevented.

Following the 2004 stampede, Saudi authorities embarked on major construction work in and around the Jamarat Bridge
Jamarat Bridge
The Jamaraat Bridge is a pedestrian bridge in Mina, Saudi Arabia near Mecca used by Muslims during the stoning of the devil ritual of the Hajj. The bridge was originally constructed in 1963, and has been expanded several times since then. The purpose of the bridge is to enable pilgrims to throw...
area. Additional accessways, footbridges, and emergency exits were built, and the three cylindrical pillars were replaced with concrete walls to enable more pilgrims simultaneous access to them without the jostling and fighting for position of recent years. The government has also announced a multi-million-dollar project to expand the bridge to five levels; the project is planned for completion in time for the 1427 AH
Islamic calendar
The Hijri calendar , also known as the Muslim calendar or Islamic calendar , is a lunar calendar consisting of 12 lunar months in a year of 354 or 355 days. It is used to date events in many Muslim countries , and used by Muslims everywhere to determine the proper day on which to celebrate Islamic...
(Dec. 2006 – Jan. 2007) Hajj.