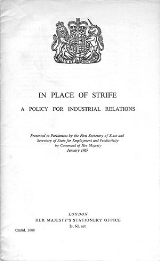 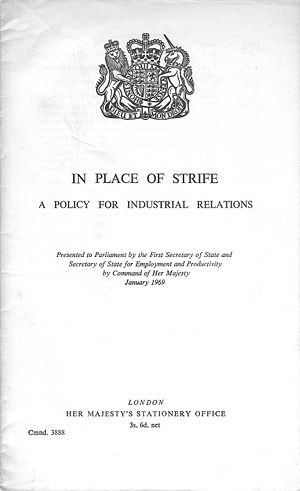 It was proposed by then-Secretary of State for Employment and Productivity
Secretary of State for Employment
The Secretary of State for Employment was a position in the Cabinet of the United Kingdom. In 1995 it was merged with Secretary of State for Education to make the Secretary of State for Education and Employment...
Barbara Castle
Barbara Castle
Barbara Anne Castle, Baroness Castle of Blackburn , PC, GCOT was a British Labour Party politician....
. Amongst its numerous proposals were plans to force unions to call a ballot
Ballot
A ballot is a device used to record choices made by voters. Each voter uses one ballot, and ballots are not shared. In the simplest elections, a ballot may be a simple scrap of paper on which each voter writes in the name of a candidate, but governmental elections use pre-printed to protect the...
before a strike
Strike action
Strike action, also called labour strike, on strike, greve , or simply strike, is a work stoppage caused by the mass refusal of employees to work. A strike usually takes place in response to employee grievances. Strikes became important during the industrial revolution, when mass labour became...
was held and establishment of an Industrial Board to enforce settlements in industrial disputes. The Labour
Labour Party (UK)
The Labour Party is a centre-left democratic socialist party in the United Kingdom. It surpassed the Liberal Party in general elections during the early 1920s, forming minority governments under Ramsay MacDonald in 1924 and 1929-1931. The party was in a wartime coalition from 1940 to 1945, after...
Cabinet
Cabinet (government)
A Cabinet is a body of high ranking government officials, typically representing the executive branch. It can also sometimes be referred to as the Council of Ministers, an Executive Council, or an Executive Committee.- Overview :...
, headed by the Prime Minister
Prime minister
A prime minister is the most senior minister of cabinet in the executive branch of government in a parliamentary system. In many systems, the prime minister selects and may dismiss other members of the cabinet, and allocates posts to members within the government. In most systems, the prime...
Harold Wilson
Harold Wilson
James Harold Wilson, Baron Wilson of Rievaulx, KG, OBE, FRS, FSS, PC was a British Labour Member of Parliament, Leader of the Labour Party. He was twice Prime Minister of the United Kingdom during the 1960s and 1970s, winning four general elections, including a minority government after the...
, was divided over the issue. The proposals had been drafted in secret by Wilson and Castle. Divisions quickly appeared within the Cabinet when the proposals were presented, with the opposition led by Jim Callaghan. A settlement was eventually reached with the Trades Union Congress
Trades Union Congress
The Trades Union Congress is a national trade union centre, a federation of trade unions in the United Kingdom, representing the majority of trade unions...
whereby the proposals were dropped.

The title of the paper was a reworking of the title of Nye Bevan's book "In Place of Fear".