Encyclopedia
The surface of the sun
Sun
The Sun is the star at the center of the Solar System. It is almost perfectly spherical and consists of hot plasma interwoven with magnetic fields...
radiates light and heat
Electromagnetic radiation
Electromagnetic radiation is a form of energy that exhibits wave-like behavior as it travels through space...
at approximately 5,500 °C. The earth
Earth
Earth is the third planet from the Sun, and the densest and fifth-largest of the eight planets in the Solar System. It is also the largest of the Solar System's four terrestrial planets...
is much cooler and so radiates heat back away from itself at much longer wavelengths, mostly in the infrared
Infrared
Infrared light is electromagnetic radiation with a wavelength longer than that of visible light, measured from the nominal edge of visible red light at 0.74 micrometres , and extending conventionally to 300 µm...
range. The idealized greenhouse model is based on the fact that certain gases in the Earth's atmosphere, including carbon dioxide
Carbon dioxide
Carbon dioxide is a naturally occurring chemical compound composed of two oxygen atoms covalently bonded to a single carbon atom...
and water vapour, are transparent to the high-frequency, high-energy solar radiation, but are much more opaque to the lower frequency infrared radiation leaving the surface of the earth. Thus heat is easily let in, but is partially trapped by these gases as it tries to leave. Rather than get hotter and hotter, Kirchhoff's law of thermal radiation
Kirchhoff's law of thermal radiation
In thermodynamics, Kirchhoff's law of thermal radiation, or Kirchhoff's law for short, is a general statement equating emission and absorption in heated objects, proposed by Gustav Kirchhoff in 1859, following from general considerations of thermodynamic equilibrium and detailed balance.An object...
says that the gases of the atmosphere also have to re-emit the infrared energy that they absorb, and they do so, also at long infrared wavelengths, both upwards into space as well as downwards back towards the Earth's surface. In the long-term, thermal equilibrium is reached when all the heat energy arriving on the planet is leaving again at the same rate. In this idealized model, the greenhouse gases cause the surface of the planet to be warmer than it would be without them, in order for the required amount of heat energy finally to be radiated out into space from the top of the atmosphere.

The greenhouse effect
Greenhouse effect
The greenhouse effect is a process by which thermal radiation from a planetary surface is absorbed by atmospheric greenhouse gases, and is re-radiated in all directions. Since part of this re-radiation is back towards the surface, energy is transferred to the surface and the lower atmosphere...
can be illustrated with an idealized planet. This is a common "textbook model": the planet will have a constant surface temperature Ts and an atmosphere with constant temperature Ta. For diagrammatic clarity,
a gap can be depicted between the atmosphere and the surface. Alternatively, Ts could be
interpreted as a temperature representative of the surface and the lower atmosphere, and Ta
could be interpreted as the temperature of the upper atmosphere. In order to justify that Ta
and Ts remain constant over the planet, strong ocean and atmospheric currents can be imagined to provide plentiful
lateral mixing. Furthermore, any daily or seasonal cycles in temperature are assumed to be insignificant.

The model will find the values of Ts and Ta that will allow the outgoing radiative power,
escaping the top of the atmosphere, to be equal to the absorbed radiative power of sunlight
Sunlight
Sunlight, in the broad sense, is the total frequency spectrum of electromagnetic radiation given off by the Sun. On Earth, sunlight is filtered through the Earth's atmosphere, and solar radiation is obvious as daylight when the Sun is above the horizon.When the direct solar radiation is not blocked...
.
When applied to a planet like Earth, the outgoing radiation will be longwave and the sunlight will be shortwave.
These two streams of radiation will have distinct emission and absorption characteristics. In the idealized model, we assume the atmosphere is
completely transparent to sunlight. The planetary albedo
Albedo
Albedo , or reflection coefficient, is the diffuse reflectivity or reflecting power of a surface. It is defined as the ratio of reflected radiation from the surface to incident radiation upon it...
αP is the fraction
of the incoming solar flux that is reflected back to space (since the atmosphere is assumed totally transparent to solar radiation, it does not matter whether this albedo is imagined to be caused by reflection at the surface of the planet or at the top of the atmosphere or a mixture). The flux density of the incoming solar radiation
is specified by the solar constant
Solar constant
The solar constant, a measure of flux density, is the amount of incoming solar electromagnetic radiation per unit area that would be incident on a plane perpendicular to the rays, at a distance of one astronomical unit...
S0. For application to planet Earth, appropriate values are
S0=1366 W m−2 and αP=0.30. Accounting for the fact that the surface area of a
sphere is 4 times the area of its intercept (its shadow), the average incoming radiation is
S0/4.

For longwave radiation, the surface of the Earth is assumed to have an emissivity of 1 (i.e., the earth is a black body in the infrared, which is realistic). The surface emits a radiative flux density F according to the Stefan-Boltzmann law:

where σ is the Stefan-Boltzmann constant
Stefan-Boltzmann constant
The Stefan–Boltzmann constant , a physical constant denoted by the Greek letter σ, is the constant of proportionality in the Stefan–Boltzmann law: the total energy radiated per unit surface area of a black body in unit time is proportional to the fourth power of the thermodynamic temperature.The...
. A key to understanding the greenhouse effect is Kirchhoff's law of thermal radiation
Kirchhoff's law of thermal radiation
In thermodynamics, Kirchhoff's law of thermal radiation, or Kirchhoff's law for short, is a general statement equating emission and absorption in heated objects, proposed by Gustav Kirchhoff in 1859, following from general considerations of thermodynamic equilibrium and detailed balance.An object...
. At any given wavelength the absorptivity of the atmosphere will be equal to the emissivity. Radiation from the surface
could be in a slightly different portion of the infrared spectrum than the radiation emitted by the atmosphere. The model assumes
that the average emissivity (absorptivity) is identical for either of these streams of infrared radiation, as they interact with the atmosphere. Thus, for longwave radiation, one symbol ε denotes both the emissivity and absorptivity of the atmosphere, for
any stream of infrared radiation. 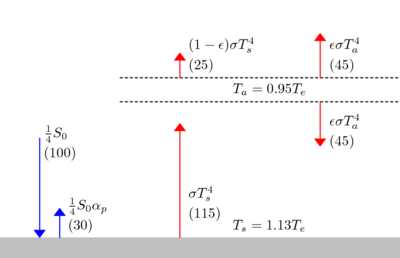 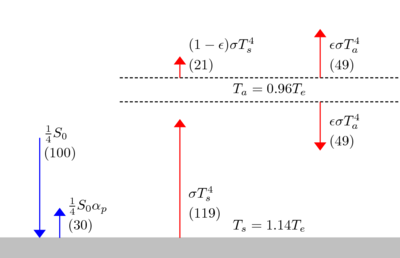 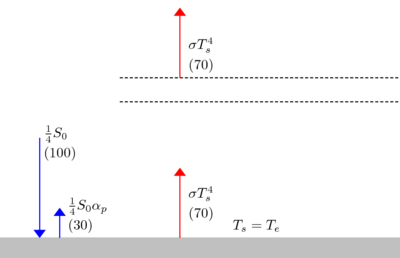 The infrared flux density out of the top of the atmosphere:

In the last term, ε represents the fraction of upward longwave radiation
from the surface that is absorbed, the absorptivity of the atmosphere.
In the first term on the right, ε is the emissivity of the atmosphere,
the adjustment of the Stefan-Boltzmann law to account for the fact that
the atmosphere is not optically thick. Thus ε plays the role of neatly blending,
or averaging, the two streams of
radiation in the calculation of the outward flux density.

Zero net radiation leaving the top of the atmosphere requires:

Energy equilibrium of the atmosphere can be either derived from the two above equilibrium conditions, or independently deduced:

Note the important factor of 2, resulting from the fact that the atmosphere radiates both upward and downward.
Thus the ratio of Ta to Ts is independent of ε:

Thus Ta can be expressed in terms of Ts, and a solution is obtained for
Ts in terms of the model input parameters:

With the definition of Te:

For a perfect greenhouse, with no radiation escaping from the surface, or ε=1:

Using the parameters defined above to be appropriate for Earth,


This value of Ts happens to
be close to a very widely quoted (but unattributed) 288 K claimed for the average global "surface temperature". ε=0.78 implies 22% of the surface radiation escapes directly to space,
consistent with the statement of 15% to 30% escaping in the greenhouse effect
Greenhouse effect
The greenhouse effect is a process by which thermal radiation from a planetary surface is absorbed by atmospheric greenhouse gases, and is re-radiated in all directions. Since part of this re-radiation is back towards the surface, energy is transferred to the surface and the lower atmosphere...
.

The radiative forcing
Radiative forcing
In climate science, radiative forcing is generally defined as the change in net irradiance between different layers of the atmosphere. Typically, radiative forcing is quantified at the tropopause in units of watts per square meter. A positive forcing tends to warm the system, while a negative...
for doubling carbon dioxide is 3.71 W m−2, in a simple parameterization. This is also the value endorsed by the IPCC
Intergovernmental Panel on Climate Change
The Intergovernmental Panel on Climate Change is a scientific intergovernmental body which provides comprehensive assessments of current scientific, technical and socio-economic information worldwide about the risk of climate change caused by human activity, its potential environmental and...
.
From the equation for

Using the values of Ts and Ta for ε=0.78 allows for