Encyclopedia
Ichthys, from Koine Greek
Koine Greek
Koine Greek is the universal dialect of the Greek language spoken throughout post-Classical antiquity , developing from the Attic dialect, with admixture of elements especially from Ionic....
: , (capitalized ΙΧΘΥΣ or ΙΧΘΥϹ) is the Greek word for "fish
Fish
Fish are a paraphyletic group of organisms that consist of all gill-bearing aquatic vertebrate animals that lack limbs with digits. Included in this definition are the living hagfish, lampreys, and cartilaginous and bony fish, as well as various extinct related groups...
". (Alternative transliterations include Ichthus and Ikhthus). In English, this refers to a symbol
Symbol
A symbol is something which represents an idea, a physical entity or a process but is distinct from it. The purpose of a symbol is to communicate meaning. For example, a red octagon may be a symbol for "STOP". On a map, a picture of a tent might represent a campsite. Numerals are symbols for...
consisting of two intersecting arcs, the ends of the right side extending beyond the meeting point so as to resemble the profile of a fish, used by early Christians as a secret symbol and now known colloquially as the "sign of the fish" or the "Jesus fish."

Historians say the 20th-century use of the ichthys motif is an adaptation based on an Early Christian symbol which included a small cross for the eye or the Greek letters "".

An ancient adaptation of ichthys is a wheel which contains the letters superimposed such that the result resembles an eight-spoked wheel.


Fish in the Gospels

Fish are mentioned and given symbolic meaning several times in the Gospels. Several of Jesus
Jesus
Jesus of Nazareth , commonly referred to as Jesus Christ or simply as Jesus or Christ, is the central figure of Christianity...
' twelve Apostles
Apostle (Christian)
The term apostle is derived from Classical Greek ἀπόστολος , meaning one who is sent away, from στέλλω + από . The literal meaning in English is therefore an "emissary", from the Latin mitto + ex...
were fishermen. He commissions them with the words "I will make you fishers of men".

At the feeding of the five thousand
Feeding the multitude
Feeding the multitude is the combined term used to refer to two separate miracles of Jesus in the Gospels.The First Miracle, "The Feeding of the 5,000" is the only miracle which is present in all four canonical Gospels...
, a boy is brought to Jesus with "five small loaves and two fish". The question is asked, "But what are they, among so many?" Jesus multiplies the loaves and fish to feed the multitude.

In , it is related that the disciples fished all night but caught nothing. Jesus instructed them to cast the nets on the other side of the boat, and they drew in 153 fish.

A less commonly cited use of fish in Christ's life may be found in the words of , in which, upon being asked if his Teacher does not pay the temple (two-drachma) tax, Simon Peter answers, "Yes." Christ tells Peter to go to the water and cast a line. He says that a coin sufficient for the tax will be found in the fish's mouth. Peter does as told and finds the coin.

The ichthys is seen in 1st-century catacombs in Rome.

According to tradition, ancient Christians, during their persecution by the Roman Empire in the first few centuries after Christ, used the fish symbol to mark meeting places and tombs, or to distinguish friends from foes: 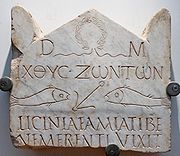 There are several other hypotheses as to why the fish was chosen. Some sources indicate that the earliest literary references came from the recommendation of Clement of Alexandria
Clement of Alexandria
Titus Flavius Clemens , known as Clement of Alexandria , was a Christian theologian and the head of the noted Catechetical School of Alexandria. Clement is best remembered as the teacher of Origen...
to his readers (Paedagogus, III, xi) to engrave their seals with the dove or fish. However, it can be inferred from Roman monumental sources such as the Capella Greca and the Sacrament Chapels of the catacomb of St. Callistus that the fish symbol was known to Christians much earlier. Another probable explanation is that it is a reference to the scripture in which Jesus miraculously
Miracle
A miracle often denotes an event attributed to divine intervention. Alternatively, it may be an event attributed to a miracle worker, saint, or religious leader. A miracle is sometimes thought of as a perceptible interruption of the laws of nature. Others suggest that a god may work with the laws...
feeds 5,000 people with fish and bread . The ichthys may also relate to Jesus or his disciples as "fishers of men" (e.g.). Tertullian
Tertullian
Quintus Septimius Florens Tertullianus, anglicised as Tertullian , was a prolific early Christian author from Carthage in the Roman province of Africa. He is the first Christian author to produce an extensive corpus of Latin Christian literature. He also was a notable early Christian apologist and...
, in his treatise On Baptism, makes a pun on the word, writing that "we, little fishes, after the example of our Jesus Christ, are born in water." Still another explanation could be the reference to The Sign of Jonah. Just like he was in the belly of a big fish, so Christ was crucified, entombed for three days, and then rose from the dead.

In non-Christian religious symbolism, the pointed oval or vesica piscis
Vesica piscis
The vesica piscis is a shape that is the intersection of two circles with the same radius, intersecting in such a way that the center of each circle lies on the circumference of the other. The name literally means the "bladder of a fish" in Latin...
shape can represent the female genitalia
Vulva
The vulva consists of the external genital organs of the female mammal. This article deals with the vulva of the human being, although the structures are similar for other mammals....
.

The symbol was rapidly adopted for use by other Christian bodies within Australia such as the Church Mission Society
Church Mission Society
The Church Mission Society, also known as the Church Missionary Society, is a group of evangelistic societies working with the Anglican Communion and Protestant Christians around the world...
from whose shop near St. Andrew's Cathedral, Sydney
St. Andrew's Cathedral, Sydney
St Andrew's Cathedral is the cathedral church of the Anglican Diocese of Sydney in the Anglican Church of Australia. The cathedral is the seat of the Anglican Archbishop of Sydney and Metropolitan of New South Wales, the Most Reverend Peter Jensen...
could be purchased small items of jewelry with the ichthys motif. From Sydney the use of the motif was taken to Asia by university students who had been resident at International House which had close ties with the A.F.E.S.
Australian Fellowship of Evangelical Students
The Australian Fellowship of Evangelical Students is an evangelical Christian parachurch organisation that aims to encourage university students to believe in and follow Jesus Christ...
. The ichthys symbol was soon in use among Christians across the world.

The "Jesus Fish" has become an icon of modern American Protestant Christianity
Christianity
Christianity is a monotheistic religion based on the life and teachings of Jesus as presented in canonical gospels and other New Testament writings...
. Today, it can be seen as a decal or emblem on the rear of automobiles or as pendants or necklaces as a sign that the owner is a Christian. It is incorporated into business logos or in business advertisements and listings in telephone books. It is also seen on clothing. Versions of this include an ichthys with "Jesus" or "ΙΧΘΥΣ" in the center, or simply the Ichthys outline by itself. This badge may also be seen in e-mail
E-mail
Electronic mail, commonly known as email or e-mail, is a method of exchanging digital messages from an author to one or more recipients. Modern email operates across the Internet or other computer networks. Some early email systems required that the author and the recipient both be online at the...
signatures
Signature block
A signature block is a block of text automatically appended at the bottom of an e-mail message, Usenet article, or forum post. This has the effect of "signing off" the message and in a reply message of indicating that no more response follows...
with the symbols or .

It can also be seen in Grant Morrison's The Invisibles
The Invisibles
The Invisibles is a comic book series that was published by the Vertigo imprint of DC Comics from 1994 to 2000. It was created and scripted by Scottish writer Grant Morrison, and drawn by various artists throughout its publication....
, where a character explains that it represents the center, interlocking part of a Venn diagram
Venn diagram
Venn diagrams or set diagrams are diagrams that show all possible logical relations between a finite collection of sets . Venn diagrams were conceived around 1880 by John Venn...
, symbolic of reality itself which is supposedly formed by the intersection of two higher, warring planes of existence.

In the video for singer-songwriter Beck
Beck
Beck Hansen is an American musician, singer-songwriter and multi-instrumentalist, known by the stage name Beck...
's "Loser", one man wears a T-shirt featuring the ichthys with the word "LOSER".


Parodies of the ichthys symbol

Distortions of the Ichthys symbol in modern culture rely on its use as a "Jesus fish" symbol of Christianity. Examples include: