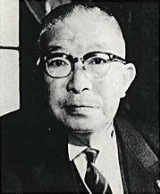 Encyclopedia
was a Japan
Japan
Japan is an island nation in East Asia. Located in the Pacific Ocean, it lies to the east of the Sea of Japan, China, North Korea, South Korea and Russia, stretching from the Sea of Okhotsk in the north to the East China Sea and Taiwan in the south...
ese politician
Politician
A politician, political leader, or political figure is an individual who is involved in influencing public policy and decision making...
and the 52nd, 53rd and 54th Prime Minister of Japan
Prime Minister of Japan
The is the head of government of Japan. He is appointed by the Emperor of Japan after being designated by the Diet from among its members, and must enjoy the confidence of the House of Representatives to remain in office...
, serving terms from December 10, 1954 through March 19, 1955, from then to November 22, 1955, and from then through December 23, 1956.

Ichirō was a Master Mason and a Protestant Christian
Protestantism
Protestantism is one of the three major groupings within Christianity. It is a movement that began in Germany in the early 16th century as a reaction against medieval Roman Catholic doctrines and practices, especially in regards to salvation, justification, and ecclesiology.The doctrines of the...
(Baptist
Baptist
Baptists comprise a group of Christian denominations and churches that subscribe to a doctrine that baptism should be performed only for professing believers , and that it must be done by immersion...
). He was Japan's third postwar Christian
Christianity in Japan
Christianity is a minority religion in Japan, with less than one percent claiming Christian belief or affiliation. Nearly all known traditional denominations of Christianity, including Roman Catholicism, Protestantism and Orthodox Christianity are represented in Japan today.The root of the Japanese...
Prime Minister
Prime Minister of Japan
The is the head of government of Japan. He is appointed by the Emperor of Japan after being designated by the Diet from among its members, and must enjoy the confidence of the House of Representatives to remain in office...
.

Iichirō Hatoyama
Iichirō Hatoyama
was a Japanese politician and diplomat. In 1976-1977, he was Foreign Minister under Prime Minister Takeo Fukuda.- Early years :Hatoyama was born in Tokyo to a high profile family. He studied at the University of Tsukuba....
, Ichirō's only son, made a career for himself as a civil servant in the Budget Bureau of the Finance Ministry
Ministry of Finance (Japan)
The ' is one of cabinet-level ministries of the Japanese government. The ministry was once named Ōkura-shō . The Ministry is headed by the Minister of Finance , who is a member of the Cabinet and is typically chosen from members of the Diet by the Prime Minister.The Ministry's origin was back in...
. Iichirō retired after having achieved the rank of administrative Vice Minister. In his second career in politics, he rose to become Foreign Minister of Japan
Minister for Foreign Affairs (Japan)
The of Japan is the Cabinet member responsible for Japanese foreign policy and the chief executive of the Ministry of Foreign Affairs.Since the end of the American occupation of Japan, the position has been one of the most powerful in the Cabinet, as Japan's economic interests have long relied on...
in 1976–1977.

Ichirō was elected to the House of Representatives
House of Representatives of Japan
The is the lower house of the Diet of Japan. The House of Councillors of Japan is the upper house.The House of Representatives has 480 members, elected for a four-year term. Of these, 180 members are elected from 11 multi-member constituencies by a party-list system of proportional representation,...
as a Rikken Seiyūkai
Rikken Seiyukai
The was one of the main political parties in the pre-war Empire of Japan. It was also known simply as the ‘Seiyūkai'Founded on September 15, 1900 by Itō Hirobumi , the Seiyūkai was a pro-government alliance of bureaucrats and former members of the Kenseitō. The Seiyūkai was the most powerful...
member in 1915. He was about to become prime minister in 1946, but was barred from politics for five years by Supreme Commander Allied Powers
Supreme Commander of the Allied Powers
Supreme Commander of the Allied Powers was the title held by General Douglas MacArthur during the Occupation of Japan following World War II...
because they thought he had co-operated with the authoritarian
Authoritarianism
Authoritarianism is a form of social organization characterized by submission to authority. It is usually opposed to individualism and democracy...
government in the 1930s and 1940s. He was allowed to return in 1951. As prime minister, he rebuilt diplomatic ties with the Soviet Union
Soviet Union
The Soviet Union , officially the Union of Soviet Socialist Republics , was a constitutionally socialist state that existed in Eurasia between 1922 and 1991....
, and favored parole for some of the Class A war criminals who had been sentenced to life imprisonment by the Tokyo Trial.

CIA
Central Intelligence Agency
The Central Intelligence Agency is a civilian intelligence agency of the United States government. It is an executive agency and reports directly to the Director of National Intelligence, responsible for providing national security intelligence assessment to senior United States policymakers...
files that were declassified in 2005 and then publicized in January 2007 by the U.S. National Archives
National Archives and Records Administration
The National Archives and Records Administration is an independent agency of the United States government charged with preserving and documenting government and historical records and with increasing public access to those documents, which comprise the National Archives...
detail a plot by ultranationalists
Uyoku dantai
Uyoku dantai are Japanese nationalist right-wing groups.In 1996, the National Police Agency estimated that there are over 1000 right wing groups in Japan with about 100,000 members in total.-Tennō period:...
to assassinate then prime minister Shigeru Yoshida
Shigeru Yoshida
, KCVO was a Japanese diplomat and politician who served as Prime Minister of Japan from 1946 to 1947 and from 1948 to 1954.-Early life:...
and install a more hawkish government led by Ichirō Hatoyama in 1952. The plot was never carried out.