Encyclopedia
The hypocenter refers to the site of an earthquake
Earthquake
An earthquake is the result of a sudden release of energy in the Earth's crust that creates seismic waves. The seismicity, seismism or seismic activity of an area refers to the frequency, type and size of earthquakes experienced over a period of time...
or a nuclear explosion
Nuclear explosion
A nuclear explosion occurs as a result of the rapid release of energy from an intentionally high-speed nuclear reaction. The driving reaction may be nuclear fission, nuclear fusion or a multistage cascading combination of the two, though to date all fusion based weapons have used a fission device...
. In the former, it is a synonym of the focus; in the latter, of ground zero.

An earthquake's hypocenter is the position where the strain
Strain (materials science)
In continuum mechanics, the infinitesimal strain theory, sometimes called small deformation theory, small displacement theory, or small displacement-gradient theory, deals with infinitesimal deformations of a continuum body...
energy stored in the rock is first released, marking the point where the fault begins to rupture. This occurs at the focal depth below the epicenter
Epicenter
The epicenter or epicentre is the point on the Earth's surface that is directly above the hypocenter or focus, the point where an earthquake or underground explosion originates...
.

The focal depth can be calculated from measurements based on seismic wave
Seismic wave
Seismic waves are waves of energy that travel through the earth, and are a result of an earthquake, explosion, or a volcano that imparts low-frequency acoustic energy. Many other natural and anthropogenic sources create low amplitude waves commonly referred to as ambient vibrations. Seismic waves...
phenomena. As with all wave
Wave
In physics, a wave is a disturbance that travels through space and time, accompanied by the transfer of energy.Waves travel and the wave motion transfers energy from one point to another, often with no permanent displacement of the particles of the medium—that is, with little or no associated mass...
phenomena in physics
Physics
Physics is a natural science that involves the study of matter and its motion through spacetime, along with related concepts such as energy and force. More broadly, it is the general analysis of nature, conducted in order to understand how the universe behaves.Physics is one of the oldest academic...
, there is uncertainty in such measurements that grows with the wavelength
Wavelength
In physics, the wavelength of a sinusoidal wave is the spatial period of the wave—the distance over which the wave's shape repeats.It is usually determined by considering the distance between consecutive corresponding points of the same phase, such as crests, troughs, or zero crossings, and is a...
so the focal depth of the source of these long-wavelength (low frequency) waves is difficult to determine exactly. Very strong earthquakes radiate a large fraction of their released energy in seismic waves with very long wavelengths and therefore a stronger earthquake involves the release of energy from a larger mass of rock. 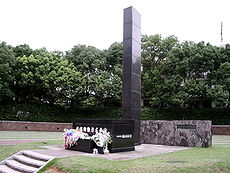 The term hypocenter also refers to the point on the Earth's surface directly below an atmospheric explosion. In principle, it applies to any such explosion but the term was not found to be necessary until the advent of massive nuclear explosions. In this context, the term 'ground zero
Ground zero
The term ground zero describes the point on the Earth's surface closest to a detonation...
' was synonymous with hypocenter, though the ground zero term is less precise, as it has been used ever more loosely.