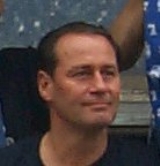 Encyclopedia
Hubertus "Huub" Jozef Margaretha Stevens (born 29 November 1953 in Sittard
Sittard
Sittard is a city in the Dutch province of Limburg, which is the southernmost province of the Netherlands.On the east Sittard borders on Germany . It has some 48,400 inhabitants . Sittard is part of the municipality of Sittard-Geleen...
) is a Dutch football manager
Coach (sport)
In sports, a coach is an individual involved in the direction, instruction and training of the operations of a sports team or of individual sportspeople.-Staff:...
and former defender.

Soon after beginning his career as head of youth development at PSV, where he helped bring and develop players and coaches such as Nick Theslof
Nick Theslof
Nick Theslof is an American soccer manager and coach, who was midfield coach and international scout to Jürgen Klinsmann at FC Bayern Munich...
, Stevens began his managerial career in 1993 with Roda JC from Kerkrade
Kerkrade
Kerkrade is a town and a municipality in the southeastern Netherlands.It is the western half of the divided region and de facto city, taken together with the eastern half, the German town of Herzogenrath...
. From October 1996 to June 2002 Stevens coached German team Schalke 04, with who he won the UEFA Cup
UEFA Cup
The UEFA Europa League is an annual association football cup competition organised by UEFA since 1971 for eligible European football clubs. It is the second most prestigious European club football contest after the UEFA Champions League...
in 1997 and the DFB-Pokal
DFB-Pokal
The DFB-Pokal or DFB Cup is a German knockout football cup competition held annually. 64 teams participate in the competition, including all clubs from the Bundesliga and the 2nd Bundesliga. It is considered the second most important national title in German football after the Bundesliga...
in 2001 and 2002. In 1999, the fans of Schalke 04 picked Stevens as trainer of the century. Afterwards, he was appointed head coach of Hertha BSC, but he was sacked on 4 December 2003 because of lack of success. Thereafter he was hired by 1. FC Köln
1. FC Köln
1. FC Köln is a German association football club based in Cologne, North Rhine-Westphalia. It was formed in 1948 as a merger of the clubs Kölner Ballspiel-Club 1901 and SpVgg Sülz 07....
, which he coached from 14 June 2004 to 22 May 2005. Under Stevens, 1. FC Köln became champions of the 2. Bundesliga
2. Fußball-Bundesliga
- Changes in division set-up :* Number of clubs: currently 18. From 1974 to 1981 there were two conferences, each of 20 teams. In 1981–91 it had 20...
and were promoted to the 1. Bundesliga
Fußball-Bundesliga
The Fußball-Bundesliga is a professional association football league in Germany. At the top of Germany's football league system, it is the country's primary football competition. It is contested by 18 teams and operates on a system of promotion and relegation with the 2. Bundesliga...
. In May 2005 Stevens returned to the Netherlands and Roda JC.

On 2 February 2007, he returned to the German Bundesliga, becoming the new coach at Hamburger SV
Hamburger SV
Hamburger Sport-Verein, usually referred to as HSV in Germany and Hamburg in international parlance, is a German multi-sport club based in Hamburg, its largest branch being its football department...
replacing Thomas Doll
Thomas Doll
Thomas Doll is a former footballer and coach. He is currently the Manager of Al-Hilal.- Career :...
, who had been sacked due to lack of success. By the time Stevens took over, the club was in the relegation zone. Results improved quite dramatically and led to Hamburg avoiding relegation and even finishing 8th in the league, thus qualifying for UEFA Intertoto Cup 2007
UEFA Intertoto Cup 2007
The UEFA Intertoto Cup 2007 was the 19th and penultimate edition of the competition and took 50 entries. Three rounds were held, and 11 teams qualified for the second qualifying round of the UEFA Cup. The draw took place at UEFA headquarters in Nyon, Switzerland on 23 April 2007...
.

Stevens took over the vacancy at PSV Eindhoven after his HSV contract expired at the end of the 2007–08 season. It has been reported he has signed a two year contract with the Eindhoven club, a club he holds very dearly to his heart. He left PSV in January 2009 and signed a contract with FC Red Bull Salzburg on 21 April 2009. He started his job on 1 July 2009.

On 9 February 2010, Stevens extended his contract with FC Red Bull Salzburg until 2012, but he was sacked on 8 April 2011.
The source of this article is wikipedia, the free encyclopedia.  The text of this article is licensed under the GFDL.