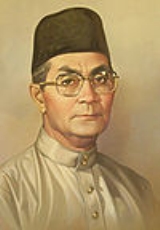 Encyclopedia
Tun
Malay titles
The Malay language has a complex system of titles and honorifics, which are still used extensively in Malaysia and Brunei. Singapore, whose Malay royalty was abolished by the British colonial government in 1891, has adopted civic titles for its leaders....
Hussein bin Dato' Onn (February 12, 1922—May 29, 1990) who is of 3/4 Malay and 1/4 Circassian ancestry was the third Prime Minister of Malaysia
Prime Minister of Malaysia
The Prime Minister of Malaysia is the indirectly elected head of government of Malaysia. He is officially appointed by the Yang di-Pertuan Agong, the head of state, who in HM's judgment is likely to command the confidence of the majority of the members of that House of Representatives , the...
, ruling from 1976 to 1981. He was granted the soubriquet Bapa Perpaduan (Father of Unity). He was born in Johor Bahru
Johor Bahru
Johor Bahru is the capital city of Johor in southern Malaysia. Johor Bahru is the southernmost city of the Eurasian mainland...
, Johor
Johor
Johor is a Malaysian state, located in the southern portion of Peninsular Malaysia. It is one of the most developed states in Malaysia. The state capital city and royal city of Johor is Johor Bahru, formerly known as Tanjung Puteri...
on February 12, 1922 to Dato Onn Jaafar
Onn Jaafar
Dato' Sir Onn bin Ja'afar, KBE was a Malay politician and a Menteri Besar of Johore in Malaysia, then Malaya. He was the founder of United Malays National Organization and was also responsible for the social economic welfare of the Malays by setting up the Rural Industrial Development Authority...
and Datin Halimah Hussein.

Tun Hussein is the son of Dato' Onn Jaafar
Onn Jaafar
Dato' Sir Onn bin Ja'afar, KBE was a Malay politician and a Menteri Besar of Johore in Malaysia, then Malaya. He was the founder of United Malays National Organization and was also responsible for the social economic welfare of the Malays by setting up the Rural Industrial Development Authority...
, the founder of UMNO and a Malayan freedom fighter. His grandfather Dato Jaafar Haji Muhammad
Jaafar Haji Muhammad
Dato Jaafar Bin Haji Muhammad was the first and longest serving Dato' Menteri Besar of Johor, an office he held until his death....
was the first Menteri Besar
Menteri Besar
The Menteri Besar is the chief executive of the state government for states in Malaysia with hereditary rulers. For states without a monarch, the title Chief Minister is used...
of Johore while his grandmother, Hanim Rogayah was from Scarcia, Turkey
Turkey
Turkey , known officially as the Republic of Turkey , is a Eurasian country located in Western Asia and in East Thrace in Southeastern Europe...
. Tun Hussein was married to Tun Suhaila Mohamad Noah for 42 years; the daughter of Tan Sri Haji Mohamad Noah Omar, former Minister of Home Affairs and first Speaker of the Dewan Rakyat. He was the brother in law of Tun Abdul Razak, his predecessor as Prime Minister, who also married another Tan Sri Haji Mohamad Noah Omar's daughter, Tun Rahah Mohamad Noah.

Tun Hussein's son, Dato' Seri Hishammuddin Bin Tun Hussein
Hishammuddin Hussein
Datuk Seri Panglima Hishammuddin bin Tun Hussein is a Malaysian politician and member of the United Malays National Organisation . He is the current Malaysian Minister of Home Affairs. He is the former Minister of Education, having served from 2004 to 2009. He has been mentioned as a likely...
, became the Home Minister of Malaysia on April 10, 2009. On the 17 September 2005, Hussein Onn's eldest daughter Datin Roqiyah Hanim, died at the age of 56 from breast cancer in Kuala Lumpur.

Tun Hussein received his early education in Telok Kurau Primary School
Telok Kurau Primary School
Telok Kurau Primary School is a government primary school on Bedok Reservoir Road in Bedok, Singapore. The school, which was founded on 6 September 1926 as Telok Kurau English School, was attended by Minister Mentor Lee Kuan Yew and Malaysia's late Prime Minister Tun Hussein Onn in its early...
, Singapore
Singapore
Singapore , officially the Republic of Singapore, is a Southeast Asian city-state off the southern tip of the Malay Peninsula, north of the equator. An island country made up of 63 islands, it is separated from Malaysia by the Straits of Johor to its north and from Indonesia's Riau Islands by the...
and at the English College, Johor. After leaving school, he joined the Johor Military Forces as a cadet in 1940 and was sent a year later to the Indian Military Academy
Indian Military Academy
The Indian Military Academy, Dehradun is the officer training school of the Indian Army. IMA was established in 1932.-Demands for an Indian military training academy:...
in Dehradun
Dehradun
- Geography :The Dehradun district has various types of physical geography from Himalayan mountains to Plains. Raiwala is the lowest point at 315 meters above sea level, and the highest points are within the Tiuni hills, rising to 3700 m above sea level...
, India
India
India , officially the Republic of India , is a country in South Asia. It is the seventh-largest country by geographical area, the second-most populous country with over 1.2 billion people, and the most populous democracy in the world...
. Upon completion of his training, he was absorbed into the Indian Army and served in the Middle East
Middle East
The Middle East is a region that encompasses Western Asia and Northern Africa. It is often used as a synonym for Near East, in opposition to Far East...
when the Second World War
World War II
World War II, or the Second World War , was a global conflict lasting from 1939 to 1945, involving most of the world's nations—including all of the great powers—eventually forming two opposing military alliances: the Allies and the Axis...
broke. After the war, his vast experience prompted the British
United Kingdom
The United Kingdom of Great Britain and Northern IrelandIn the United Kingdom and Dependencies, other languages have been officially recognised as legitimate autochthonous languages under the European Charter for Regional or Minority Languages...
to employ him as an instructor at the Malayan Police Recruiting and Training Centre in Rawalpindi
Rawalpindi
Rawalpindi , locally known as Pindi, is a city in the Pothohar region of Pakistan near Pakistan's capital city of Islamabad, in the province of Punjab. Rawalpindi is the fourth largest city in Pakistan after Karachi, Lahore and Faisalabad...
.

Tun Hussein came back to Malaysia in 1945 and was appointed Commandant of the Johor Bahru Police Depot. The following year he joined the Malaya Civil Service as an assistant administrative officer in Segamat
Segamat
Segamat is a town and district located in the north of the state of Johor in Malaysia, bordering two other states of Malaysia . It is located roughly 172 kilometres from Johor Bahru, the capital city of Johor State. It is 95 km travel distance via North-South Expressway from Johor Bahru to...
, Johor
Johor
Johor is a Malaysian state, located in the southern portion of Peninsular Malaysia. It is one of the most developed states in Malaysia. The state capital city and royal city of Johor is Johor Bahru, formerly known as Tanjung Puteri...
. He was later posted to the state of Selangor
Selangor
Selangor also known by its Arabic honorific, Darul Ehsan, or "Abode of Sincerity") is one of the 13 states of Malaysia. It is on the west coast of Peninsular Malaysia and is bordered by Perak to the north, Pahang to the east, Negeri Sembilan to the south and the Strait of Malacca to the west...
, becoming Klang
Klang
Klang , formerly known as Kelang, is the royal city and former capital of the state of Selangor, Malaysia. It is located within the Klang District in Klang Valley. It is located about 32 km to the west of Kuala Lumpur and 6 km east of Port Klang...
and Kuala Selangor
Kuala Selangor
Kuala Selangor is a town located in Selangor, Malaysia, and is capital of an administrative district of the same name.The town caters largely to tourists coming this way en route to Kelip-Kelip at Kampung Kuantan or local travellers on a trail of seafood binging. Kuala Selangor town is not...
’s district officer.

With IMP losing momentum, Tun Hussein went to London
London
London is the capital city of :England and the :United Kingdom, the largest metropolitan area in the United Kingdom, and the largest urban zone in the European Union by most measures. Located on the River Thames, London has been a major settlement for two millennia, its history going back to its...
to study law at Lincoln's Inn
Lincoln's Inn
The Honourable Society of Lincoln's Inn is one of four Inns of Court in London to which barristers of England and Wales belong and where they are called to the Bar. The other three are Middle Temple, Inner Temple and Gray's Inn. Although Lincoln's Inn is able to trace its official records beyond...
, qualifying as a Barrister-at-Law. He came back as a certified lawyer and practiced in Kuala Lumpur.

Tun Hussein returned to politics in 1968 after being persuaded by the then Prime Minister Tun Abdul Razak to rejoin UMNO. He stood and won the general elections in 1969 and was appointed as the education minister. Tun Hussein’s meteoric rise continued when on August 13, 1973 he succeeded the late Tun Dr Ismail as the Deputy Prime Minister. On January 15, 1976 he was appointed as Prime Minister of Malaysia after the death of Tun Razak.

Tun Hussein was renowned for stressing on the issue of unity through policies aimed at rectifying economic imbalances between the communities. For instance, April 20, 1981 saw the National Unit Trust Scheme being launched. He also gave serious consideration to the concept of Rukun Tetangga (a neighbourhood watch scheme) and the fight against the drug menace.

He underwent a coronary bypass in early 1981. On July 17 the same year, he retired from active politics and relinquished his prime minister post due to health concerns. He was succeeded by Tun Dr. Mahathir Mohamad.

After his retirement as Prime Minister he continued to contribute to welfare organizations. He was instrumental in the setting up of the Tun Hussein Onn Eye Hospital. He was also an advisor to Petronas the country’s oil company and Chairman of Institute of Strategic and International Studies (ISIS).

During the 1987 UMNO leadership crisis, Tun Hussein fell out with Dr. Mahathir Mohamad, supporting Team B along with Tunku Abdul Rahman. Tun Hussein along with the Tunku, henceforth, became a strident critic of the Mahathir administration and died without having rejoined UMNO.

He died on the 29 May 1990 in Seaton Medical Center, San Francisco, at the age of 68. He had two sons and four daughters. He is buried in Makam Pahlawan
Makam Pahlawan
The Makam Pahlawan is the burial ground of several Malaysian leaders and politicians. It is located near the Malaysian national mosque, Masjid Negara in the national capital, Kuala Lumpur...
(Heroes Mausoleum) near Masjid Negara
Masjid Negara
The National Mosque of Malaysia is located in Kuala Lumpur. It has a capacity of 15,000 people and is situated among of beautiful gardens. The original structure was designed by a three-person team from the Public Works Department - UK architect Howard Ashley, and Malaysians Hisham Albakri and...
, Kuala Lumpur
Kuala Lumpur
Kuala Lumpur is the capital and the second largest city in Malaysia by population. The city proper, making up an area of , has a population of 1.4 million as of 2010. Greater Kuala Lumpur, also known as the Klang Valley, is an urban agglomeration of 7.2 million...
.

Tun Hussein Onn was looked upon as being very sincere in his struggle for racial unity and had a reputation of being firm against anyone that tried to create racial unrest in the country and it was due to this, that he was known as Bapa Perpaduan or 'Father of Unity'.
The source of this article is wikipedia, the free encyclopedia.  The text of this article is licensed under the GFDL.