Hurricane coverings, commonly known as shutters, are used in hurricane mitigation to protect house
House
A house is a building or structure that has the ability to be occupied for dwelling by human beings or other creatures. The term house includes many kinds of different dwellings ranging from rudimentary huts of nomadic tribes to free standing individual structures...
s and other structures from damage caused by storm
Storm
A storm is any disturbed state of an astronomical body's atmosphere, especially affecting its surface, and strongly implying severe weather...
s.

Hurricane shutters are used to prevent window
Window
A window is a transparent or translucent opening in a wall or door that allows the passage of light and, if not closed or sealed, air and sound. Windows are usually glazed or covered in some other transparent or translucent material like float glass. Windows are held in place by frames, which...
s from being broken by flying objects during a storm
Storm
A storm is any disturbed state of an astronomical body's atmosphere, especially affecting its surface, and strongly implying severe weather...
. Although the negative pressure caused by high velocity wind flowing over a building roof can cause the roof to fail with the building envelope intact, broken windows allow the air pressure
Pressure
Pressure is the force per unit area applied in a direction perpendicular to the surface of an object. Gauge pressure is the pressure relative to the local atmospheric or ambient pressure.- Definition :...
to rise inside a building
Building
In architecture, construction, engineering, real estate development and technology the word building may refer to one of the following:...
, creating an even greater pressure difference, and increasing the likelihood of roof failure.

Shutters are frequently constructed from steel
Steel
Steel is an alloy that consists mostly of iron and has a carbon content between 0.2% and 2.1% by weight, depending on the grade. Carbon is the most common alloying material for iron, but various other alloying elements are used, such as manganese, chromium, vanadium, and tungsten...
or aluminium
Aluminium
Aluminium or aluminum is a silvery white member of the boron group of chemical elements. It has the symbol Al, and its atomic number is 13. It is not soluble in water under normal circumstances....
, but homeowners sometimes use the low-cost alternative of plywood
Plywood
Plywood is a type of manufactured timber made from thin sheets of wood veneer. It is one of the most widely used wood products. It is flexible, inexpensive, workable, re-usable, and can usually be locally manufactured...
. The shutters are affixed to the outside of the building with screws, hurricane clips, or a track system. Advanced shutters may be motorized, and they may fold away when not in use.

For more information on hurricane shutters, see the FEMA Guide, Protecting Your Property from High Winds

Three major types of shutters are known alternatively as panel systems. They are usually made of plywood, metal (aluminium or steel), or polycarbonate plastic. Lexan
Lexan
Lexan is a registered trademark for SABIC Innovative Plastics' brand of polycarbonate resin thermoplastic. Polycarbonate polymer is produced by reacting bisphenol A with carbonyl dichloride, also known as phosgene. Lexan is the brand name for polycarbonate sheet and resin in a wide range of grades...
panels are transparent, and may be flat or have been heat-formed into a corrugated shape to further increase impact resistance. Panels must be attached to the structure via screws in a direct mount or on tracks. When not in use, storm panels are stored in an easy to reach location. Newly-constructed homes sometimes have an assigned area for storage of storm panels. 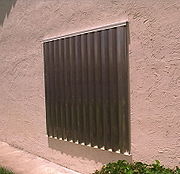 Another type of shutter is an accordion shutter which are made from interlocking vertical blades which slide into place horizontally on a track. They are operated by pulling each curtain toward the center of the track, latching the curtains together and locking the handle.

Another type is the roll-up or rolling shutter, consisting of a series of slats that form a curtain with both sides of the curtain being inserted into guide rails. The curtain is then rolled onto an axle which is covered by a housing. Rolling shutters can be operated manually by gear, by pull strap or can be motorized independently or in conjunction with a manual override. Motorized shutters can be operated by either a switch or remote and can be controlled either individually or in groups. On loss of power caused by hurricanes, motorized shutters must be operated manually, requiring either access to the motor (which can be difficult) or a pre-installed manual override. Most often, a manual override is operated using a gear. When deployed, all hurricane shutters require special techniques for firefighters to gain access to the interior of a structure.

Other types are the Bahamas and Colonials. Bahama shutters are mounted above the window creating shade when they are open, and when in use, they are brought down and secured over the window. Colonials are similar to the wooden shutters, but are made of aluminum. They hinge on the side of the windows and swing shut to protect the opening.

Also used are awning shutters, with a horizontal hinge above the opening being protected.

Hurricane fabric coverings are a newer, relatively lower cost type of shutter. Tested and approved systems are made from polypropylene fibers, polyamide fibers or from laminated or cast PVC.

Both the International Building Code (IBC) and the International Residential Code use the criteria set forth in ASTM E1886 & E1996 with regards to hurricane building material product approval. These test method norms describe the standardized tests to measure the impact resistance of a shutter and its resistance to cyclic wind pressure. The IBC's requirements are adaptable to all levels of required wind speed.

The Florida Building Code (FBC) is in most aspects similar to the IBC in regard to the testing and approval of hurricane shutters. The Miami-Dade County norms, often considered the most stringent requirements for hurricane shutters, rely on self-developed testing methods TAS201, 202 and 203. Passing the tests prescribed by the TAS norms is required only for shutters approved for use in the Florida HVHZ (High Velocity Hurricane Zone). The Florida Building Code will accept testing performed by TAS methods for inclusion in the FBC Database of approved building products. Both Miami-Dade County and the State of Florida maintain web-searchable databases of products approved for use as hurricane protection. These typically include not only actual test results from certified independent testing laboratories, they also contain "Product Approval Drawings" or "Installation Instructions" which provide specifications for hurricane shutter assembly and installation. Both the product and installation method must be shown to be in compliance with these drawings in order for a shutter to be considered "code-rated".