Encyclopedia
A window shutter is a solid and stable window covering
Window covering
Window coverings are material used to cover a window to manage sunlight, to provide additional weatherproofing, to ensure privacy or for purely decorative purposes....
usually consisting of a frame of vertical stiles and horizontal rails (top, centre and bottom). Set within this frame can be louver
Louver
A louver or louvre , from the French l'ouvert; "the open one") is a window, blind or shutter with horizontal slats that are angled to admit light and air, but to keep out rain, direct sunshine, and noise...
s (both operable or fixed, horizontal or vertical), solid panels, fabric, glass and most any other item that can be mounted within a frame.
Shutters may be employed for a variety of reasons, including controlling the amount of sunlight that enters a room, to provide privacy, to protect against weather and to enhance the aesthetics of a building. Depending on the application, and the construction of the window frame, shutters can be mounted to fit within the opening or to overlap the opening. The term window shutter includes both interior shutters, used on the inside of a house or building, and exterior shutters, used on the outside of a structure. On some styles of buildings it is common to have shutters to cover the doors as well as the windows.

Interior shutters usually hinge on either side of a window opening, and swing inwards to allow access to the window or to allow light to enter a room. Operable louvred shutters have louvres, or slats, that rotate open or closed to control light, visibility and airflow. Shutters that have operable louvres are described using different terms such as traditional shutters, California shutters, or plantation shutters which typically refers to the size of the louvre blade. Other interior shutters use stationary louvres that do not rotate (fixed louvres), solid panels that can be raised, recessed or flat, fabric inserts or tinted glass. Shutters can be configured in a single tier unit that has one shutter top to bottom of a window opening as well as multiple tiers. Multiple tier units feature separate shutters on each tier which allows the top shutters to be opened independently from the bottom shutters. Café type shutters refer to shutters that only cover the lower portion of a window.

Full height shutters can be made with a horizontal divider rail which separates the upper and lower portions of the shutter. With operable louvred shutters this gives greater control as the louvres above the divider rail can be operated independently from the louvres below the divider rail. A tilt bar (rod) is used for adjusting louvre position and to keep them in a uniform position. Interior shutters can be constructed from numerous woods, which can be painted or stained, and a variety of synthetic materials. Interior shutters that are made to close tolerances are preferable for the best possible fit. When louvres or tilt bar (rod) become damaged, replacement kits for these damaged parts may be ordered online and are easy to install.

In the UK, most interior shutters historically were panelled. 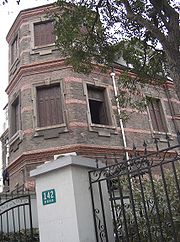 Exterior shutters were originally constructed for light control, privacy, and protection from the elements. Functional shutters hinge to either side of a window or at the top and swing closed when necessary and can also be mounted on tracks applied to the face of the building. Fixed and operable louvres shed rain, allow air transfer, filter direct sunlight, protect from small flying debris, and provide privacy. Operable louvred shutter allow for greater control in light and ventilation. Solid panels and board-and-batten shutters are generally used for protection during severe weather. Non-functional shutters are specifically used to enhance the features of a building. Functional shutters have traditionally been constructed from solid woods that have proven to endure outside elements but have also been mass produced in woods less suitable to the outdoors like pine. Finishing wood shutters is recommended for extended life. Composite shutters offer advantages over wood shutters such as resistance to twisting, splitting, and rotting. However all composites aren't created equal and, PVC shutters are often hinged with three or more hinges and painted with vinyl safe paint to keep from bowing in the sun and can require additional hardware.

Certain hardwoods that are currently used for exterior shutters, specifically Spanish Cedar, Honduran Mahogany and Teak, have grain that actually breathes out moisture making them resistant to rot and decay, and far more durable than a softer wood like pine. Because of the tannin
Tannin
A tannin is an astringent, bitter plant polyphenolic compound that binds to and precipitates proteins and various other organic compounds including amino acids and alkaloids.The term tannin refers to the use of...
in these woods they are also not prone to problems from insects. Non-functional exterior shutters can be constructed from vinyl, wood, or other synthetic materials. Non-functional shutters simply screw or bolt directly to the building. A recent material to be used for the making of composite functional shutters is fiberglass because it is not prone to rotting or twisting, and because it is dimensionally stable and has low expansion and contraction. Fiberglass is a reinforced plastic unlike vinyl or PVC shutters so it does not warp or sag much like its unreinforced counterparts. Its strength is comparable to aluminum however it does not suffer from corrosion and electrolysis.

An exterior hurricane shutter or storm shutter is used to protect windows and doors in a building against the effects of high winds, rain, and flying objects during a hurricane, or as security gates over the opening. They can be made of a variety of materials such as fiberglass, aluminium
Aluminium
Aluminium or aluminum is a silvery white member of the boron group of chemical elements. It has the symbol Al, and its atomic number is 13. It is not soluble in water under normal circumstances....
, iron
Iron
Iron is a chemical element with the symbol Fe and atomic number 26. It is a metal in the first transition series. It is the most common element forming the planet Earth as a whole, forming much of Earth's outer and inner core. It is the fourth most common element in the Earth's crust...
, or wood
Wood
Wood is a hard, fibrous tissue found in many trees. It has been used for hundreds of thousands of years for both fuel and as a construction material. It is an organic material, a natural composite of cellulose fibers embedded in a matrix of lignin which resists compression...
and can be installed in tracks to be quickly opened and closed with motorized controls. There are also high impact resistant plastics that can be applied to new or existing wood shutters that provide hurricane protection. Florida has recently modified its requirements for hurricane shutters, so before purchasing any hurricane shutter you must check your local building codes to see what is required and/or acceptable.
The source of this article is wikipedia, the free encyclopedia.  The text of this article is licensed under the GFDL.