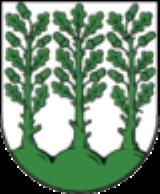 Encyclopedia
Hoyerswerda is the largest city in the district of Bautzen in the German
Germany
Germany , officially the Federal Republic of Germany , is a federal parliamentary republic in Europe. The country consists of 16 states while the capital and largest city is Berlin. Germany covers an area of 357,021 km2 and has a largely temperate seasonal climate...
state of Saxony. It is located in Lusatia
Lusatia
Lusatia is a historical region in Central Europe. It stretches from the Bóbr and Kwisa rivers in the east to the Elbe valley in the west, today located within the German states of Saxony and Brandenburg as well as in the Lower Silesian and Lubusz voivodeships of western Poland...
, a region where many people speak the Sorbian languages
Sorbian languages
The Sorbian languages are classified under the Slavic branch of the Indo-European languages. They are the native languages of the Sorbs, a Slavic minority in the Lusatia region of eastern Germany. Historically the language has also been known as Wendish or Lusatian. Their collective ISO 639-2 code...
in addition to German
German language
German is a West Germanic language, related to and classified alongside English and Dutch. With an estimated 90 – 98 million native speakers, German is one of the world's major languages and is the most widely-spoken first language in the European Union....
.

The city is situated in north of the district of Bautzen
Bautzen (district)
Bautzen is a district in the Free State of Saxony in Germany including the former districts of Bischofswerda and Kamenz. It is bounded by the Czech Republic, the district of Sächsische Schweiz-Osterzgebirge, the district-free city Dresden and the districts of Meißen and Görlitz...
, close to the borders of Saxony with Brandenburg
Brandenburg
Brandenburg is one of the sixteen federal-states of Germany. It lies in the east of the country and is one of the new federal states that were re-created in 1990 upon the reunification of the former West Germany and East Germany. The capital is Potsdam...
. It dists 36 km from Bautzen
Bautzen
Bautzen is a hill-top town in eastern Saxony, Germany, and administrative centre of the eponymous district. It is located on the Spree River. As of 2008, its population is 41,161...
, 44 from Cottbus
Cottbus
Cottbus is a city in Brandenburg, Germany, situated around southeast of Berlin, on the River Spree. As of , its population was .- History :...
and 65 from Dresden
Dresden
Dresden is the capital city of the Free State of Saxony in Germany. It is situated in a valley on the River Elbe, near the Czech border. The Dresden conurbation is part of the Saxon Triangle metropolitan area....
. Hoyerswerda is part of Upper Lusatia
Upper Lusatia
Upper Lusatia is a region a biggest part of which belongs to Saxony, a small eastern part belongs to Poland, the northern part to Brandenburg. In Saxony, Upper Lusatia comprises roughly the districts of Bautzen and Görlitz , in Brandenburg the southern part of district Oberspreewald-Lausitz...
and lies on a rural plain
Plain
In geography, a plain is land with relatively low relief, that is flat or gently rolling. Prairies and steppes are types of plains, and the archetype for a plain is often thought of as a grassland, but plains in their natural state may also be covered in shrublands, woodland and forest, or...
characterized by the presence of several lakes and some swamps.

The old town of Hoyerswerda divides into eleven districts (literal interpretation in brackets):

The new town of Hoyerswerda divides into 14 districts (literal interpretation in brackets):

The city was first mentioned in 1268. In 1371 it was granted an official marketplace. It received municipal rights
German town law
German town law or German municipal concerns concerns town privileges used by many cities, towns, and villages throughout Central and Eastern Europe during the Middle Ages.- Town law in Germany :...
from Freiherr von Duba in 1423, as well as the right to elect its own council.

In 1815 Hoyerswerda became part of the Prussian Province of Silesia
Province of Silesia
The Province of Silesia was a province of the Kingdom of Prussia from 1815 to 1919.-Geography:The territory comprised the bulk of the former Bohemian crown land of Silesia and the County of Kladsko, which King Frederick the Great had conquered from the Austrian Habsburg Monarchy in the 18th...
. In 1873 the new railway between Hoyerswerda and Ruhland
Ruhland
Ruhland is a town in the Oberspreewald-Lausitz district, in southern Brandenburg, Germany. It is situated on the river Schwarze Elster, 12 km southwest of Senftenberg....
opened - it had a positive effect on the economic development of the city. In 1912 the Domowina
Domowina
Domowina is a political independent league of the Sorbian and Wendish people and umbrella organization of Sorbian societies in Lower and Upper Lusatia, Germany...
, the organisation of the Sorbs, was founded in the city. The town became part of the Prussian Province of Lower Silesia
Province of Lower Silesia
The Province of Lower Silesia was a province of the Free State of Prussia from 1919 to 1945. Between 1938 and 1941 it was reunited with Upper Silesia as the Silesia Province. The capital of Lower Silesia was Breslau...
in 1912.

At the end of the Second World War the town was declared a core center of German defence and was therefore heavily damaged. The invading Red Army
Red Army
The Workers' and Peasants' Red Army started out as the Soviet Union's revolutionary communist combat groups during the Russian Civil War of 1918-1922. It grew into the national army of the Soviet Union. By the 1930s the Red Army was among the largest armies in history.The "Red Army" name refers to...
set fire to the town. It became part of Saxony again after the war, but from 1952 until 1990, when the states of East Germany were abolished
Administrative divisions of the German Democratic Republic
The Administrative divisions of the German Democratic Republic were constituted in two different forms during the country's 41-year-long history. The Republic first retained the traditional German division into federated states called Länder, but in 1952 replaced them with arbitrarily-drawn...
, it was administered by the Bezirk (Region) of Cottbus.

During the time of the GDR, Hoyerswerda became an important industrial town. The lignite
Lignite
Lignite, often referred to as brown coal, or Rosebud coal by Northern Pacific Railroad,is a soft brown fuel with characteristics that put it somewhere between coal and peat...
processing enterprise, "Schwarze Pumpe", was established in 1955 (it is today in the federal state of Brandenburg
Brandenburg
Brandenburg is one of the sixteen federal-states of Germany. It lies in the east of the country and is one of the new federal states that were re-created in 1990 upon the reunification of the former West Germany and East Germany. The capital is Potsdam...
). Since 1957, the demand for new living space rose dramatically - in the following years, 10 new big living areas with tens of thousands of apartments were built. In 1981 the city reached its maximum number of inhabitants, with about 71,054 people living there. At that time, there was nowhere in the GDR where more children per inhabitant were born than Hoyerswerda. Upon reunification in 1990, the people of the city decided to become part of the reconstituted state of Saxony.

With the end of the GDR and the reconstruction of the East German economy, many enterprises in the industrial region of Hoyerswerda were endangered, closed or had to lay off employees. The social situation in the city became especially dangerous: in 1991, for example, a xenophobic attack took place on a hostel containing refugees. It became necessary to develop an anti-violence program for the city. Between 1993 and 1998 several smaller villages became part of the city, but the number of overall inhabitants declined rapidly, from about 70,000 people in the 1980s to about 41,000 people by the end of 2000. The population is expected to shrink even further, to about 20,000 or 30,000, by 2030. There are attempts to renovate the city: many of the apartment blocks built in the time of the GDR have been demolished. This project, like others, was financed with money from the EU and the Federal Republic of Germany.

Its role as an independently ruled town in Saxony disappeared in 2008 with the reshaping of the regional administration of Saxony.

While part of East Germany, Hoyerswerda was the location of several important employers, including a power plant, a glassworks, coal mines, and an army artillery range. With the unification of Germany and the subsequent demise of a centrally-planned economy, the city has lost many jobs as the glassworks and artillery range were closed and the power plant reduced its payroll. In the last fifteen years, the population has fallen by one-half and unemployment remains at 22.3% (Economist, August 27, 2005). But know it must build new houses in Hoyerswerda, because of the "Kupferabbau" by Schwarze Pumpe the population would be more in the next years.