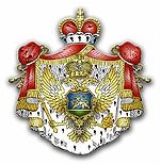 Encyclopedia
The House of Petrović
Petrovic
Petrović is a slavic last name,found in countries with slavic population.Examples of souch countries are : Croatia,Serbia,Montenegro,Bosnia and Hercegovina,Slovenia,Macedonia,Russia,this surename or last name is not tied to nationaliti,some people tie this last name to Serbian and Montenegrian...
-Njegoš (Serbian Cyrillic: Петровић-Његош) was the Royal House of Montenegro
Montenegro
Montenegro Montenegrin: Crna Gora Црна Гора , meaning "Black Mountain") is a country located in Southeastern Europe. It has a coast on the Adriatic Sea to the south-west and is bordered by Croatia to the west, Bosnia and Herzegovina to the northwest, Serbia to the northeast and Albania to the...
from 1696 to 1918. Montenegro had enjoyed de facto independence from the Ottoman Empire
Ottoman Empire
The Ottoman EmpireIt was usually referred to as the "Ottoman Empire", the "Turkish Empire", the "Ottoman Caliphate" or more commonly "Turkey" by its contemporaries...
from 1711 but only received formal international recognition as an independent principality in 1878.

Montenegro was ruled from inception by Vladikas, Prince-Bishops, who had a dual temporal and spiritual role. In 1852 this role was amended to be a purely temporal office. In 1910 the ruling prince Nikola I
Nicholas I of Montenegro
Nikola I Mirkov Petrović-Njegoš was the only king of Montenegro, reigning as king from 1910 to 1918 and as prince from 1860 to 1910. He was also a poet, notably penning "Onamo, 'namo!", a popular song from Montenegro.-Early life:Nikola was born in the village of Njeguši, the ancient home of the...
announced his elevation to King. In 1916 King Nikola I was ousted by the invasion and occupation of his country by Austria-Hungary
Austria-Hungary
Austria-Hungary , more formally known as the Kingdoms and Lands Represented in the Imperial Council and the Lands of the Holy Hungarian Crown of Saint Stephen, was a constitutional monarchic union between the crowns of the Austrian Empire and the Kingdom of Hungary in...
that was followed by invasion and occupation by Serbia
Serbia
Serbia , officially the Republic of Serbia , is a landlocked country located at the crossroads of Central and Southeast Europe, covering the southern part of the Carpathian basin and the central part of the Balkans...
and his formal deposition in 1918 as Montenegro was annexed by the emergent Kingdom of Serbs, Croats and Slovenes.

A period of eighty years of control from Belgrade
Belgrade
Belgrade is the capital and largest city of Serbia. It is located at the confluence of the Sava and Danube rivers, where the Pannonian Plain meets the Balkans. According to official results of Census 2011, the city has a population of 1,639,121. It is one of the 15 largest cities in Europe...
followed during which Nikola I died in exile in France in 1921 followed shorty afterwards by the surprise abdication of his son and heir, Danilo III
Danilo, Crown Prince of Montenegro
Danilo Aleksandar Petrović-Njegoš was the Crown Prince of Montenegro. He was eldest of the son of King Nikola I Petrović-Njegoš of Montenegro and Queen Milena Vukotić. During the Balkan Wars and World War I he led the Montenegrin Army with his father, King Nicholas I of Montenegro, Janko Vukotić,...
, the same year. The latter's nephew, Michael Petrović-Njegoš, inherited the titles of his predecessors whilst in exile in France and survived arrest and internment by order of Adolf Hitler
Adolf Hitler
Adolf Hitler was an Austrian-born German politician and the leader of the National Socialist German Workers Party , commonly referred to as the Nazi Party). He was Chancellor of Germany from 1933 to 1945, and head of state from 1934 to 1945...
for refusing to head up a puppet Montenegrin state aligned to the Axis Powers
Axis Powers
The Axis powers , also known as the Axis alliance, Axis nations, Axis countries, or just the Axis, was an alignment of great powers during the mid-20th century that fought World War II against the Allies. It began in 1936 with treaties of friendship between Germany and Italy and between Germany and...
. He was succeeded by his son Nicholas Petrović-Njegoš in 1986. Nicholas returned to Montenegro to support the Montenegrin independence movement that went on to achieve full sovereignty for the Republic of Montenegro in 2006 referendum
Montenegrin independence referendum, 2006
The Montenegrin independence referendum was a refe­rendum on the independence of the Republic of Montenegro from the State Union of Serbia and Montenegro that was held on 21 May 2006.The total turnout of the referendum was 86.5%...
.

The present head of the house is Nicholas II of Montenegro.

The first known ancestor, Vojvoda Bogut
Vojvoda Bogut
Vojvoda Bogut was a 14th-century Serbian military commander of the Serbian Emperor Stefan Dušan "The Mighty" of the Serbian Empire ....
, held a city near Ugljevik
Ugljevik
Ugljevik is a municipality and town in Bosnia and Herzegovina. The municipality located in the eastern foothills of Mount Majevica, in picturesque countryside, where wondrous and beautiful mountain starts descending towards the flatlands of Semberija, to which it is tied more than any other...
during the rule of Emperor Dušan the Mighty (r. 1331-1355). His son, Đurađ Bogutović
Đurađ Bogutović
Đurađ Bogutović was a 14th-century Serbian nobleman. He was the grand-father to Herak Heraković, the founding father of the Petrović-Njegoš and Heraković-Popović families of the Njeguši tribe....
, migrated to a village named Muževice in Banjani
Banjani
Banjani is an Old Herzegovinian and Montenegrin clan of Aromanian origin, located in Montenegro, of which territory comprises 380 km², west of Nikšić. The territory is the centrum between Nikšić and Bileća, from the top of Njegoš to the Trebišnjica, and to the Bileća lake...
from Bosnia, fleeing the Ottoman Turks. By the end of the 14th-century, however, Bogutović and his children are seen living in Drobnjaci
Drobnjaci
Drobnjaci is an Old Herzegovinian clan and region in northern Montenegro . Its unofficial centre is in Boan/Šavnik. The Drobnjaci families are predominantly Serb Orthodox, with a majority declaring as Serbs, the rest as Montenegrins...
.