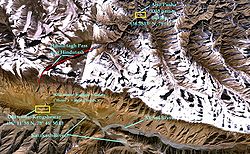 Hindutash, also known as Hindu-tagh Pass, is a historical mountain pass
Mountain pass
A mountain pass is a route through a mountain range or over a ridge. If following the lowest possible route, a pass is locally the highest point on that route...
in the western Xinjiang Uyghur Autonomous Region (formerly, Chinese Turkestan) of the People's Republic of China
People's Republic of China
China , officially the People's Republic of China , is the most populous country in the world, with over 1.3 billion citizens. Located in East Asia, the country covers approximately 9.6 million square kilometres...
. The pass cuts through the Kunlun Mountains
Kunlun Mountains
The Kunlun Mountains are one of the longest mountain chains in Asia, extending more than 3,000 km. In the broadest sense, it forms the northern edge of the Tibetan Plateau south of the Tarim Basin and the Gansu Corridor and continues east south of the Wei River to end at the North China Plain.The...
connecting the now-deserted town of Kangxiwar, formerly Kengshewar, (36° 11' 58 N, 78° 46' 50 E) in the Karakash River
Karakash River
The Karakash or Black Jade River, also spelled Karakax , is a river in the Xinjiang autonomous region of the People's Republic of China, which lies partially in the disputed Aksai Chin region. The river originates near Sumde on the northern slopes of the Karakoram range in the Aksai Chin region of...
valley to the town of Pusha, (36.3833° N, 79° E), formerly Bushia, in the Yurungkash River valley, and also connects to the road to the city of Hotan, formerly Khotan. (See maps on right.)

A recent detailed Chinese map labels the pass 印地他什达坂 (Yìndì-Tāshí Dábǎn), and shows only a "track", but no road, going over it. The same map showed no other roads or tracks crossing the Kunlun within Hotan County.

In 1857, the explorer Robert Schlagintweit
Robert Schlagintweit
Robert Schlagintweit was a German explorer of Central Asia who also wrote about travels in America.The fourth of the five Schlagintweit brothers of Munich, at an early age he joined his brothers Hermann and Adolf in their Alpine researches, and jointly published Neue Untersuchungen über die...
crossed this pass from camping grounds in Sumgal
Sumgal
Sumgal is a now-deserted town in the Karakash River valley in the Ladakh region of Xinjiang, China. In 1857, the explorer Robert Schlagintweit crossed the Hindutash pass from the camping grounds in Sumgal , on the banks of the Karakash river, approximately 7 miles upstream from Sumgal in Ladakh...
("three fords"), on the banks of the Karakash river, approximately 7 miles (11.3 km) upstream from Kengshewar and estimated its height to be 17879 ft (5,450 m). At the top of the pass (36° 16' 23 N, 78° 46' 50 E), there is a steep glacier with many crevasses. The eastern Kunlun range, which is in the southern region of the Hotan prefecture of Xinjiang, is cut by two other passes: the Sanju Pass
Sanju Pass
The Sanju, or Sanju-la, is a mountain pass in the Kun Lun Mountains in Xinjiang, China. It was the last on a series of difficult passes on the most common summer caravan route between Ladakh and the Tarim Basin....
, near the small staging post of Xaidulla
Xaidulla
Xaidulla, Shahidullah or Shahidula is a small settlement or camping ground on the upper Karakash River strategically located just to the north of the Karakoram Pass on the old caravan route from the Tarim Basin to Ladakh...
, formerly Shahidulla, northwest of Hindu-tagh, and the Ilchi Pass, southeast of Hindu-tagh, just north-east of the village of Dahongliutan
Dahongliutan
Dahongliutan is a village and valley in Hotan County in the Xinjiang region of China. It is located in the historical region of Tibet and is located near the current Tibet Autonomous Region border.-External links:*...
, itself just north of the now disputed Aksai Chin
Aksai Chin
Aksai Chin is one of the two main disputed border areas between China and India, and the other is South Tibet, which comprises most of India's Arunachal Pradesh. It is administered by China as part of Hotan County in the Hotan Prefecture of Xinjiang Autonomous Region, but is also claimed by India...
area (see second map on right). The former pass had been much used historically, and provided the traditional means of entry from the south into the ancient Kingdom of Khotan
Kingdom of Khotan
The Kingdom of Khotan was an ancient Buddhist kingdom that was located on the branch of the Silk Road that ran along the southern edge of the Taklamakan Desert in the Tarim basin. -Early names:-Capital:...
. The latter was traversed in 1865 by W. H. Johnson of the Survey of India
Survey of India
The Survey of India is India's central engineering agency in charge of mapping and surveying. Set up in 1767 to help consolidate the territories of the British East India Company, it is one of the oldest Engineering Departments of the Government of India...
. "Hindu-tagh" means "Indian Mountain," and "Hindu-tash," "Indian stone" in the Uyghur dialect
Uyghur language
Uyghur , formerly known as Eastern Turk, is a Turkic language with 8 to 11 million speakers, spoken primarily by the Uyghur people in the Xinjiang Uyghur Autonomous Region of Western China. Significant communities of Uyghur-speakers are located in Kazakhstan and Uzbekistan, and various other...
of Xinjiang.