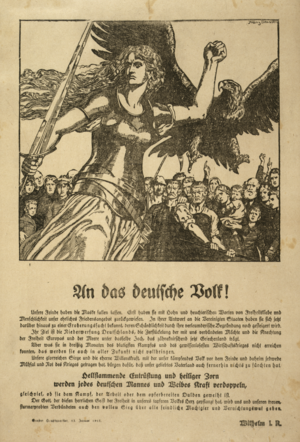 The Hindenburg Line was a vast system of defences in northeastern France
France
The French Republic , The French Republic , The French Republic , (commonly known as France , is a unitary semi-presidential republic in Western Europe with several overseas territories and islands located on other continents and in the Indian, Pacific, and Atlantic oceans. Metropolitan France...
during World War I
World War I
World War I , which was predominantly called the World War or the Great War from its occurrence until 1939, and the First World War or World War I thereafter, was a major war centred in Europe that began on 28 July 1914 and lasted until 11 November 1918...
. It was constructed by the German
Germany
Germany , officially the Federal Republic of Germany , is a federal parliamentary republic in Europe. The country consists of 16 states while the capital and largest city is Berlin. Germany covers an area of 357,021 km2 and has a largely temperate seasonal climate...
s (using Russian PoWs as labour) during the winter of 1916–17. The line stretched from Lens
Lens, Pas-de-Calais
Lens is a commune in the Pas-de-Calais department in northern France. It is one of France's large Picarde cities along with Lille, Valenciennes, Amiens, Roubaix, Tourcoing, Arras, and Douai.-Metropolitan area:...
to beyond Verdun
Verdun
Verdun is a city in the Meuse department in Lorraine in north-eastern France. It is a sub-prefecture of the department.Verdun is the biggest city in Meuse, although the capital of the department is the slightly smaller city of Bar-le-Duc.- History :...
. A portion of the line was known as the Siegfried Line, not to be confused with the better known Siegfried Line
Siegfried Line
The original Siegfried line was a line of defensive forts and tank defences built by Germany as a section of the Hindenburg Line 1916–1917 in northern France during World War I...
of the Second World War
World War II
World War II, or the Second World War , was a global conflict lasting from 1939 to 1945, involving most of the world's nations—including all of the great powers—eventually forming two opposing military alliances: the Allies and the Axis...
.

The decision to build the line was made by Field-Marshal Paul von Hindenburg
Paul von Hindenburg
Paul Ludwig Hans Anton von Beneckendorff und von Hindenburg , known universally as Paul von Hindenburg was a Prussian-German field marshal, statesman, and politician, and served as the second President of Germany from 1925 to 1934....
and General Erich Ludendorff
Erich Ludendorff
Erich Friedrich Wilhelm Ludendorff was a German general, victor of Liège and of the Battle of Tannenberg...
, who had taken over command of Germany's war effort in August 1916, during the final stages of the First Battle of the Somme. The Hindenburg Line was built across a salient
Salients, re-entrants and pockets
A salient is a battlefield feature that projects into enemy territory. The salient is surrounded by the enemy on three sides, making the troops occupying the salient vulnerable. The enemy's line facing a salient is referred to as a re-entrant...
in the German front, so that by withdrawing to these fortifications the German army was shortening its front. The length of the front was reduced by 50 kilometres (31.1 mi) and enabled the Germans to release 13 divisions for service in reserve.

The withdrawal to the line began in February 1917 and the territory between the old front and the new line was devastated by the German army.

The fortifications included concrete
Concrete
Concrete is a composite construction material, composed of cement and other cementitious materials such as fly ash and slag cement, aggregate , water and chemical admixtures.The word concrete comes from the Latin word...
bunker
Bunker
A military bunker is a hardened shelter, often buried partly or fully underground, designed to protect the inhabitants from falling bombs or other attacks...
s and machine gun
Machine gun
A machine gun is a fully automatic mounted or portable firearm, usually designed to fire rounds in quick succession from an ammunition belt or large-capacity magazine, typically at a rate of several hundred rounds per minute....
emplacements, heavy belts of barbed wire
Barbed wire
Barbed wire, also known as barb wire , is a type of fencing wire constructed with sharp edges or points arranged at intervals along the strand. It is used to construct inexpensive fences and is used atop walls surrounding secured property...
, tunnels for moving troops, deep trenches, dug-outs and command posts. At a distance of one kilometre or just over a half-mile in front of the fortifications was a thinly-held outpost line, which would serve a purpose comparable to skirmisher
Skirmisher
Skirmishers are infantry or cavalry soldiers stationed ahead or alongside a larger body of friendly troops. They are usually placed in a skirmish line to harass the enemy.-Pre-modern:...
s: slowing down and disrupting an enemy advance. In addition, villages (called "Outpost Villages") immediately in front of the outpost line were sometimes fortified and used to reinforce the main defenses.

The line was subdivided into five areas, named from north to south:.


(Note: That there was an extension of the "Hunding Stellung" further south from Verdun to Metz, called the "Michel Stellung".)

Of these areas, the Siegfried Stellung was considered the strongest.

The German command believed the new line was impregnable. However it was temporarily broken through in the Battle of Cambrai in 1917 by British and Canadian forces including tanks, and was successfully permanently breached in a number of locations during the Allied
Allies of World War I
The Entente Powers were the countries at war with the Central Powers during World War I. The members of the Triple Entente were the United Kingdom, France, and the Russian Empire; Italy entered the war on their side in 1915...
Hundred Days Offensive
Hundred Days Offensive
The Hundred Days Offensive was the final period of the First World War, during which the Allies launched a series of offensives against the Central Powers on the Western Front from 8 August to 11 November 1918, beginning with the Battle of Amiens. The offensive forced the German armies to retreat...
in September 1918.