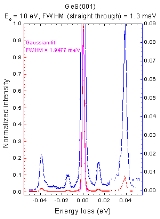 Encyclopedia
High Resolution Electron Energy Loss Spectroscopy (HREELS) is a tool used in surface science
Surface science
Surface science is the study of physical and chemical phenomena that occur at the interface of two phases, including solid–liquid interfaces, solid–gas interfaces, solid–vacuum interfaces, and liquid-gas interfaces. It includes the fields of surface chemistry and surface physics. Some related...
. The inelastic scattering
Inelastic scattering
In particle physics and chemistry, inelastic scattering is a fundamental scattering process in which the kinetic energy of an incident particle is not conserved . In an inelastic scattering process, some of the energy of the incident particle is lost or gained...
of electron
Electron
The electron is a subatomic particle with a negative elementary electric charge. It has no known components or substructure; in other words, it is generally thought to be an elementary particle. An electron has a mass that is approximately 1/1836 that of the proton...
s from surfaces is utilized to study electronic excitations or vibrational modes of the surface or of molecules adsorbed to a surface. Hence in contrast to other Electron Energy Loss Spectroscopies (EELS) HREELS deals with small energy losses in the range of 10-3 eV to 1 eV.
It plays an important role in the investigation of surface structure, catalysis
Catalysis
Catalysis is the change in rate of a chemical reaction due to the participation of a substance called a catalyst. Unlike other reagents that participate in the chemical reaction, a catalyst is not consumed by the reaction itself. A catalyst may participate in multiple chemical transformations....
, dispersion
Dispersion relation
In physics and electrical engineering, dispersion most often refers to frequency-dependent effects in wave propagation. Note, however, that there are several other uses of the word "dispersion" in the physical sciences....
of surface phonon
Phonon
In physics, a phonon is a collective excitation in a periodic, elastic arrangement of atoms or molecules in condensed matter, such as solids and some liquids...
s and the monitoring of epitaxial growth
Epitaxy
Epitaxy refers to the deposition of a crystalline overlayer on a crystalline substrate, where the overlayer is in registry with the substrate. In other words, there must be one or more preferred orientations of the overlayer with respect to the substrate for this to be termed epitaxial growth. The...
.

In general Electron Energy Loss Spectroscopy bases on the energy losses of electrons when inelastically scattered on matter. An incident beam of electrons with a known energy (Ei) is scattered on a sample. The scattering of these electrons can excite the electronic structure of the sample. If this is the case the scattered electron loses the specific energy (ΔE) needed to cause the excitation. Those scattering processes are called inelastic. It may be easiest to imagine that the energy loss is for example due to an excitation of an electron from an atomic K-shell to the M-shell. This energy for this excitation is taken away from the electrons kinetic energy.
Then the energies of the scattered electrons (Es) are measured and the energy loss can be calculated. From the measured data an intensity versus energy loss diagram is established. In the case of scattering on phonons the so called energy loss can also be a gain of energy (see: Raman spectroscopy
Raman scattering
Raman scattering or the Raman effect is the inelastic scattering of a photon. It was discovered by Sir Chandrasekhara Venkata Raman and Kariamanickam Srinivasa Krishnan in liquids, and by Grigory Landsberg and Leonid Mandelstam in crystals....
).
These energy losses allow, using comparison to other experiments, or theory, to draw conclusion about surface properties of the sample.

Excitations of the surface structure are usually very low energetic ranging from 10-3 eV to 10 eV. In spectra electrons with only small energy losses, like also Raman scattering, the interesting features are all located very close together and especially near to the very strong elastic scattering peak. Hence the used spectrometers require a high resolution. Therefore this regime of EELS is called High Resolution EELS.
In this context resolution shall be defined as the energy difference in which two features in a spectrum are just distinguishable divided by the mean energy of those features:

Considering that 102 eV electrons have a mean free path of around 1 nm (corresponds to a few monolayers), which is decreasing with lower energies, this automatically implies that HREELS is a surface sensitive technique.
This is the reason why HREELS must be measured in reflection and has to be implemented in ultra high vacuum (UHV
UHV
UHV may refer to:* University of Houston–Victoria* Ultra high vacuum* Ultra high voltage power line...
). In contrast to e.g. Core Level EELS which operates at very high energies and can therefore also be found in Transmission Electron Microscopes
Transmission electron microscopy
Transmission electron microscopy is a microscopy technique whereby a beam of electrons is transmitted through an ultra thin specimen, interacting with the specimen as it passes through...
(TEM).

In HREELS not only the electron energy loss can be measured, often the angular distribution, of electrons of a certain energy loss, in reference to the specular direction gives interesting insight to the structures on the surface.