The State Russian Herzen Pedagogical University is one of the largest universities in Russia
Russia
Russia or , officially known as both Russia and the Russian Federation , is a country in northern Eurasia. It is a federal semi-presidential republic, comprising 83 federal subjects...
. Located in Saint Petersburg
Saint Petersburg
Saint Petersburg is a city and a federal subject of Russia located on the Neva River at the head of the Gulf of Finland on the Baltic Sea...
, it operates 20 faculties and more than 100 departments. Embroidered in its structure are the Institute of Pre-University Courses, the Institute of Continuous Professional Development, and the Pedagogical Research Center. The university is named after the Russian writer and philosopher Alexander Herzen
Alexander Herzen
Aleksandr Ivanovich Herzen was a Russian pro-Western writer and thinker known as the "father of Russian socialism", and one of the main fathers of agrarian populism...
.

The university dates its creation to , when Emperor Paul I of Russia
Paul I of Russia
Paul I was the Emperor of Russia between 1796 and 1801. He also was the 72nd Prince and Grand Master of the Order of Malta .-Childhood:...
gave an independent status to the Saint Petersburg foundling
Child abandonment
Child abandonment is the practice of relinquishing interests and claims over one's offspring with the intent of never again resuming or reasserting them. Causes include many social and cultural factors as well as mental illness. An abandoned child is called a foundling .-Causes:Poverty is often a...
house established by Ivan Betskoy
Ivan Betskoy
Ivan Ivanovich Betskoi or Betskoy was a Russian school reformer who served as Catherine II's advisor on education and President of the Imperial Academy of Arts for thirty years...
and put it under the patronage of Empress Maria Feodorovna. The Imperial Foundling House eventually developed into the modern Pedagogical University.

Betskoy's humanistic ideas furnished the basic principles of the foundling house. The strong pedagogical traditions and consistency in education were passed from one generation to the next and were finally inherited by The State Russian Herzen Pedagogical University. The foundling house was based in a unique architectural complex: the palaces of the earl Kirill Razumovsky
Kirill Razumovsky
Count Kirill Grigorievich Razumovsky was a Ukrainian Registered Cossack from the Kozelets regiment in north-eastern Ukraine, who served as the last Hetman of Left- and Right-Bank Ukraine until 1764; Razumovsky was subsequently elected Hetman of the sovereign Zaporozhian Host in 1759, a position...
and Aleksey Grigorievich Bobrinsky on the Moyka
Moika River
The Moyka River is a small river which encircles the central portion of Saint Petersburg, effectively making it an island. The river, originally known as Mya, derives its name from the Ingrian word for "slush, mire"...
in present-day Saint Petersburg.

The Imperial Foundling House developed as a complex educational establishment carrying progressive ideas of upbringing based upon charity and patronage. It mainly took in destitute and deprived children: foundling orphans, disabled children, and children from failed marriages. Besides being an educational establishment and a center for childcare, the foundling house had an operating hospital. Surrounding village districts had for the first time access to free pediatric care. 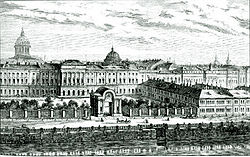 The foundling house laid the basis for women's pedagogical education across the country. In 1837, the "Women's Foundling Institute" was established on the basis of the House's higher classes. After 1885 it was called Nicholas' Foundling House. Its graduates were taught by a tutor, a music and dancing pedagogue and a French language teacher. The vast experience of the Nicholas' Foundling house gave rise to the establishment of the first institution for pedagogical higher education: the Women's Pedagogical Institute that was established in 1903.

Concerned with the foundling house is the onset of Russian applied correctional pedagogy. In 1806, a new unit appeared in the structure of the house. It was a college for the deaf, the first educational establishment for disabled children in Russia. Here, the first Russian pedagogues for deaf children were educated and their first works on the subject were created.

In 1864, a pedagogical seminary was created for countryside students who were to become teachers of public schools and colleges. Four years later, a women's college was established that granted specialisations of a fully trained nurse, village school and kindergarten children. This set the basis for Russian pre-school education. During these years, kindergartens were set up in the district of the foundling house. The graduates of the House successfully worked in the new establishments for children. In the Mariininsky department, a reorganised foundling house, famous pedagogues like M. V. Chistyakov worked, the editor-in-chief of "Children's magazine" and the author of numerous books for children, and V. A. Zolotov, an active adherent of the "sound method" of teaching reading and writing and an author of a lot of textbooks for public colleges. K. D. Ushinsky's pedagogical ideas rendered immense influence on restructuring the departments of the foundling house. Thanks to the work of Mariininsky department and its foundling house, the pace of pedagogical education in Saint Petersburg in the beginning of the 20th century took an unusual course. A whole system of establishments dealing with a range of questions concerning birth, pre-school, elementary, high-school, higher education, and correctional pedagogics was set, giving rise to a prototype of the prospective university.

Over the years, the university has been the workspace for outstanding scientists, academicians, and professors. Many of them initiated worldwide known scientific schools, thus making a valuable input in development of Russian science.