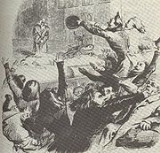 The play opened in Paris
Paris
Paris is the capital and largest city in France, situated on the river Seine, in northern France, at the heart of the Île-de-France region...
on February 25, 1830. Today, the drama is more remembered for the demonstrations which accompanied the premiere, and for being the inspiration of Verdi
Giuseppe Verdi
Giuseppe Fortunino Francesco Verdi was an Italian Romantic composer, mainly of opera. He was one of the most influential composers of the 19th century...
's opera Ernani
Ernani
Ernani is an operatic dramma lirico in four acts by Giuseppe Verdi to an Italian libretto by Francesco Maria Piave, based on the play Hernani by Victor Hugo. The first production took place at La Fenice Theatre, Venice on 9 March 1844...
, than it is for its own merits.

It is used to describe the magnitude/ elegance of Prince Prospero's masquerade. Also referenced in Edgar Allan Poe
Edgar Allan Poe
Edgar Allan Poe was an American author, poet, editor and literary critic, considered part of the American Romantic Movement. Best known for his tales of mystery and the macabre, Poe was one of the earliest American practitioners of the short story and is considered the inventor of the detective...
's short story, "The Masque of the Red Death". Gillenormand in Les Misérables criticizes Hernani.

Set in a fictitious version of the Spanish court of 1519, it is based on courtly romance and intrigues.

In the first scenes Hugo introduces Doña Sol, a young noblewoman of the court of Don Carlos, King of Spain (the future Charles V, Holy Roman Emperor
Charles V, Holy Roman Emperor
Charles V was ruler of the Holy Roman Empire from 1519 and, as Charles I, of the Spanish Empire from 1516 until his voluntary retirement and abdication in favor of his younger brother Ferdinand I and his son Philip II in 1556.As...
). The King has come to her room to seduce her.
They are interrupted by the arrival of Doña Sol's true love, the bandit Hernani, and the two argue over her and are about to duel.
Her uncle (and fiancé) Don Ruy Gomez de Silva enters, and demands to know why both men are in Doña Sol's private chambers.
Don Carlos asserts that he had come hoping to meet Ruy Gomez to discuss affairs of state, and Hernani does not reveal the King's true intent.
In return for the bandit's discretion, Don Carlos claims to Don Ruy that Hernani is a member of his entourage. Thus, each has given the other an honorable excuse for their presence in the quarters of Doña Sol.

Thus, three men- two noblemen and a mysterious bandit, are in love with the same woman. What follows in the ensuing chaos of action prompted the biographer of Hugo, J.P. Houston, to write "... and a résumé [plot synopsis] will necessarily fail, as in the case of Notre-Dame de Paris, to suggest anything like the involution of its details" (Houston 1974:53).

Don Carlos learns of a midnight rendezvous between Doña Sol and Hernani. He decides to interrupt it in the hope of abducting her. Hernani becomes aware of the plot and has his men surround the King's guards. For the first time, the King becomes aware of Hernani's true identity as a bandit, rather than a nobleman, and refuses a duel. Hernani, although he could charge the King with a crime, allows him to go free.

The (interrupted) wedding of Doña Sol to Ruy Gomez. Hernani arrives in disguise, and confronts her for agreeing, however reluctantly, to marry.
He admits his criminal past to Ruy Gomez, and the fact that he is being pursued by the King. On the King's arrival, Ruy Gomez hides Hernani and refuses to surrender him, citing laws of hospitality, which, he asserts, protect his guests, even from the King.
While Ruy Gomez and Don Carlos argue, Doña Sol, alone with Hernani, reveals that she plans to commit suicide before her marriage can be consummated. The King, frustrated by Ruy Gomez' resistance, drops the pursuit of Hernani, and instead abducts Doña Sol.
Ruy Gomez agrees to spare Hernani's life long enough to free Doña Sol, on condition that Hernani will die willingly at some point in the future. Hernani gives him a horn which Ruy Gomez is to blow to announce the moment of Hernani's death.

Don Carlos is elected Holy Roman Emperor. He resolves to live up to the requirements and responsibilities of his new title. Carlos pardons Hernani and gives him Doña Sol.

The two are married, but as they enjoy their wedding feast, Hernani hears the call of the horn blown by Ruy Gomez. As Hernani is about to drink poison Dona Sol enters the room and tries to convince him that he is hers and he does not have to listen to her uncle. He is unable to persuade her otherwise. She drinks half the bottle of poison. Hernani shocked by Doña Sol's decision to kill herself drinks the other half of the poison and they die in each others arms. Ruy Gomez de Silva kills himself.