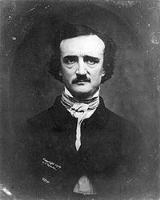 Overview
Edgar Allan Poe was an American author, poet, editor and literary critic, considered part of the American Romantic Movement
Romanticism
Romanticism was an artistic, literary and intellectual movement that originated in the second half of the 18th century in Europe, and gained strength in reaction to the Industrial Revolution...
. Best known for his tales of mystery and the macabre
Macabre
In works of art, macabre is the quality of having a grim or ghastly atmosphere. Macabre works emphasize the details and symbols of death....
, Poe was one of the earliest American practitioners of the short story and is considered the inventor of the detective fiction
Detective fiction
Detective fiction is a sub-genre of crime fiction and mystery fiction in which an investigator , either professional or amateur, investigates a crime, often murder.-In ancient literature:...
genre. He is further credited with contributing to the emerging genre of science fiction
Science fiction
Science fiction is a genre of fiction dealing with imaginary but more or less plausible content such as future settings, futuristic science and technology, space travel, aliens, and paranormal abilities...
. He was the first well-known American writer to try to earn a living through writing alone, resulting in a financially difficult life and career.

He was born as Edgar Poe in Boston
Boston
Boston is the capital of and largest city in Massachusetts, and is one of the oldest cities in the United States. The largest city in New England, Boston is regarded as the unofficial "Capital of New England" for its economic and cultural impact on the entire New England region. The city proper had...
, Massachusetts
Massachusetts
The Commonwealth of Massachusetts is a state in the New England region of the northeastern United States of America. It is bordered by Rhode Island and Connecticut to the south, New York to the west, and Vermont and New Hampshire to the north; at its east lies the Atlantic Ocean. As of the 2010...
; he was orphaned young when his mother died shortly after his father abandoned the family.

I HAVE A STRANGE QUESTIOIN TO ASK. YEARS AGO SOMEONE I KNOW WAS WATCHING A MOVIE WITH POE IN IT AND IT HAD TO DO WITH A MAN HE ASKED NOT TO STAY IN A...
More

What were Poe's personal feelings on literary theory?

The Dark Side of Edgar Allan Poe

What branch of armed forces did Poe serve in?
More

O, human love! thou spirit given,On Earth, of all we hope in Heaven!

Sound loves to revel in a summer night.

Years of love have been forgotIn the hatred of a minute.

And the cloud that took the form(When the rest of Heaven was blue)Of a demon in my view.

Music, when combined with a pleasurable idea, is poetry; music without the idea is simply music; the idea without the music is prose from its very definitiveness.