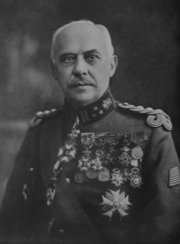 Baron Herman Baltia was a Belgian
Belgium
Belgium , officially the Kingdom of Belgium, is a federal state in Western Europe. It is a founding member of the European Union and hosts the EU's headquarters, and those of several other major international organisations such as NATO.Belgium is also a member of, or affiliated to, many...
military officer, the son of the Belgian General Charles Baltia (of Luxembourg
Luxembourg
Luxembourg , officially the Grand Duchy of Luxembourg , is a landlocked country in western Europe, bordered by Belgium, France, and Germany. It has two principal regions: the Oesling in the North as part of the Ardennes massif, and the Gutland in the south...
ish origin) and of a German
Germans
The Germans are a Germanic ethnic group native to Central Europe. The English term Germans has referred to the German-speaking population of the Holy Roman Empire since the Late Middle Ages....
mother.

In 1907 Baltia was made an officer in the army
Belgian Army
The Land Component is organised using the concept of capacities, whereby units are gathered together according to their function and material. Within this framework, there are five capacities: the command capacity, the combat capacity, the support capacity, the services capacity and the training...
's cartographic institute, charged with preparing a mission for setting the southern boundaries of the Belgian Congo
Belgian Congo
The Belgian Congo was the formal title of present-day Democratic Republic of the Congo between King Leopold II's formal relinquishment of his personal control over the state to Belgium on 15 November 1908, and Congolese independence on 30 June 1960.-Congo Free State, 1884–1908:Until the latter...
, although he did not get to begin this task. In 1908 he was promoted to Major. He became a member of the general staff
General Staff
A military staff, often referred to as General Staff, Army Staff, Navy Staff or Air Staff within the individual services, is a group of officers and enlisted personnel that provides a bi-directional flow of information between a commanding officer and subordinate military units...
in 1910.

A watercolour painter
Watercolor painting
Watercolor or watercolour , also aquarelle from French, is a painting method. A watercolor is the medium or the resulting artwork in which the paints are made of pigments suspended in a water-soluble vehicle...
, he organised several exhibitions on the Yser front
Battle of the Yser
The Battle of the Yser secured part of the coastline of Belgium for the allies in the "Race to the Sea" after the first three months of World War I.-Strategic Context:As part of the execution of the Schlieffen Plan, Belgium had been invaded by Germany...
starting in 1916, even displaying some of his own works during the first exhibition. He did this while serving as commander of the 10th Ligne Regiment (the future Chasseurs ardennais). Baltia received high military honours and was made a Major General in December 1916, having served with distinction in the vicinity of Yser and Ypres
Ypres
Ypres is a Belgian municipality located in the Flemish province of West Flanders. The municipality comprises the city of Ypres and the villages of Boezinge, Brielen, Dikkebus, Elverdinge, Hollebeke, Sint-Jan, Vlamertinge, Voormezele, Zillebeke, and Zuidschote...
and in North France.

From 10 January 1920 (when the Treaty of Versailles
Treaty of Versailles
The Treaty of Versailles was one of the peace treaties at the end of World War I. It ended the state of war between Germany and the Allied Powers. It was signed on 28 June 1919, exactly five years after the assassination of Archduke Franz Ferdinand. The other Central Powers on the German side of...
entered into force) to 1 June 1925 (in accordance with the law of 6 March 1925), Baltia, promoted to Lieutenant General on 26 March 1920, exercised the function of Royal High Commissioner of the East Cantons
Eupen-Malmedy
Eupen-Malmedy, or the East Cantons , is a group of cantons in Belgium, composed of the former Prussian districts of Malmedy and Eupen, together with the Neutral Moresnet...
, responsible solely before the Prime Minister. He obtained this post in particular due to his command of French as well as German but also, according to his detractors, due to his colonial
Belgian colonial empire
The Belgian colonial empire consisted of three colonies possessed by Belgium between 1901 and 1962: Belgian Congo , Rwanda and Burundi...
experience, which would prove useful in a territory annexed by Belgium against its inhabitants' will.

One of Baltia's first official acts was to have taken down the monument commemorating the Franco-Prussian War
Franco-Prussian War
The Franco-Prussian War or Franco-German War, often referred to in France as the 1870 War was a conflict between the Second French Empire and the Kingdom of Prussia. Prussia was aided by the North German Confederation, of which it was a member, and the South German states of Baden, Württemberg and...
of 1870-1871 located in the town of Malmedy
Malmedy
Malmedy is a municipality of Belgium. It lies in the country's Walloon Region, Province of Liège. It belongs to the French Community of Belgium, within which it is French-speaking with facilities for German-speakers. On January 1, 2006 Malmedy had a total population of 11,829...
, where he had an official residence. After quickly fulfilling the high expectations on him, he was awarded the title of Baron by royal decree on 28 August 1920.

Between 26 January and 23 July 1920, he organised a popular consultation of the type required by the Treaty of Versailles. In this vote, the opponents of annexation had to write their names and addresses in an ad hoc register. Supporters had to do nothing. Only 271 of 33,726 voters dared to do this, and a number of these were former officials of the German Empire
German Empire
The German Empire refers to Germany during the "Second Reich" period from the unification of Germany and proclamation of Wilhelm I as German Emperor on 18 January 1871, to 1918, when it became a federal republic after defeat in World War I and the abdication of the Emperor, Wilhelm II.The German...
whose roots did not lie in the region.
The source of this article is wikipedia, the free encyclopedia.  The text of this article is licensed under the GFDL.