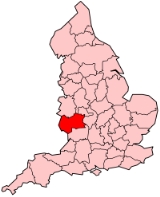 The Local Government Boundary Commission in 1948 proposed a merger of the two counties – the proposals of this Commission were abandoned and not implemented. A merger of Herefordshire with South Worcestershire was again proposed by the Redcliffe–Maud Report in 1969, and was retained in the Conservative Party
Conservative Party (UK)
The Conservative Party, formally the Conservative and Unionist Party, is a centre-right political party in the United Kingdom that adheres to the philosophies of conservatism and British unionism. It is the largest political party in the UK, and is currently the largest single party in the House...
's February 1971 White Paper (gaining more of Worcestershire), although no name was given. Under the Local Government Bill as introduced into Parliament in November 1971, it was named Malvernshire, after Malvern
Malvern, Worcestershire
Malvern is a town and civil parish in Worcestershire, England, governed by Malvern Town Council. As of the 2001 census it has a population of 28,749, and includes the historical settlement and commercial centre of Great Malvern on the steep eastern flank of the Malvern Hills, and the former...
, a town roughly in the geographical centre of the new county. The name was subject to ridicule and was altered during the Bill's passage through Parliament. The name Wyvern was also suggested, combining the names of the rivers that run through the two cities: the River Wye
River Wye
The River Wye is the fifth-longest river in the UK and for parts of its length forms part of the border between England and Wales. It is important for nature conservation and recreation.-Description:...
through Hereford, and the River Severn
River Severn
The River Severn is the longest river in Great Britain, at about , but the second longest on the British Isles, behind the River Shannon. It rises at an altitude of on Plynlimon, Ceredigion near Llanidloes, Powys, in the Cambrian Mountains of mid Wales...
through Worcester. A commercial radio station for the area, Wyvern FM
Wyvern FM
Wyvern is a radio station broadcasting to Herefordshire and Worcestershire in England. Wyvern is predominantly music-based, playing pop from the 1980s through to the present day...
was set up in 1982 using this allusion, it was also used much later by the First Group who renamed their bus operations in the area First Wyvern as opposed to the more historical First Midland Red
Midland Red
Midland Red was a bus company which operated in the English Midlands from 1905 to 1981. It was the trading name used by the Birmingham and Midland Motor Omnibus Company , which was renamed Midland Red Omnibus Company in 1974...
used previously.

Due to the disparity of sizes of the populations – Herefordshire had about 140,000 people, much less than Worcestershire, which had a population of about 420,000 – it was perceived by Herefordshire as a takeover rather than a merger, and it never attracted the loyalties of residents. A "Hands off Herefordshire" campaign was set up, and the proposal was opposed by Herefordshire County Council.

A Hereford bull
Hereford (cattle)
Hereford cattle are a beef cattle breed, widely used both in intemperate areas and temperate areas, mainly for meat production.Originally from Herefordshire, England, United Kingdom, more than five million pedigree Hereford Cattle now exist in over 50 countries...
was led down Whitehall
Whitehall
Whitehall is a road in Westminster, in London, England. It is the main artery running north from Parliament Square, towards Charing Cross at the southern end of Trafalgar Square...
on 6 April 1972, as part of a protest, which also involved a petition handed in at 10 Downing Street calling for the preservation of Herefordshire.

Terry Davis, MP for Bromsgrove noted that the petition had been signed by 60,000 people. Clive Bossom
Clive Bossom
Major Sir Clive Bossom, 2nd Baronet FRSA, FRGS is a former British Conservative Party politician and former Member of Parliament ....
, the MP for Leominster in Herefordshire, supported the merger, noting "much of South Worcestershire is very like Herefordshire".