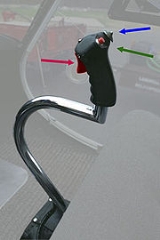 Encyclopedia
A helicopter
Helicopter
A helicopter is a type of rotorcraft in which lift and thrust are supplied by one or more engine-driven rotors. This allows the helicopter to take off and land vertically, to hover, and to fly forwards, backwards, and laterally...
pilot
Aviator
An aviator is a person who flies an aircraft. The first recorded use of the term was in 1887, as a variation of 'aviation', from the Latin avis , coined in 1863 by G. de la Landelle in Aviation Ou Navigation Aérienne...
manipulates the helicopter flight controls in order to achieve controlled aerodynamic flight
Flight
Flight is the process by which an object moves either through an atmosphere or beyond it by generating lift or propulsive thrust, or aerostatically using buoyancy, or by simple ballistic movement....
. The changes made to the flight controls are transmitted mechanically to the rotor, producing aerodynamic effects on the helicopter's rotor blades which allow the helicopter to be controlled. For tilting forward and back (pitch), or tilting sideways (roll), the angle of attack
Angle of attack
Angle of attack is a term used in fluid dynamics to describe the angle between a reference line on a lifting body and the vector representing the relative motion between the lifting body and the fluid through which it is moving...
of the main rotor blades is altered cyclically during rotation, creating differing amounts of lift at different points in the cycle. For increasing or decreasing overall lift, the angle of attack for all blades is collectively altered by equal amounts at the same time resulting in ascents, descents, acceleration and deceleration.

A typical helicopter has three separate flight control inputs. These are the cyclic stick, the collective lever, and the anti-torque pedals. Depending on the complexity of the helicopter, the cyclic and collective may be linked together by a mixing unit, a mechanical or hydraulic device that combines the inputs from both and then sends along the "mixed" input to the control surfaces to achieve the desired result. The manual throttle may also be considered a flight control because it is needed to maintain rotor speed on smaller helicopters without governors.

The cyclic control is usually located between the pilot's legs and is commonly called the cyclic stick or just cyclic. On most helicopters, the cyclic is similar in appearance to a joystick in a conventional aircraft. By contrast, the Robinson R22
Robinson R22
The Robinson R22 is a two-bladed, single-engine light utility helicopter manufactured by Robinson Helicopter. The two-seat R22 was designed in 1973 by Frank Robinson and has been in production since 1979.-Development:...
and Robinson R44
Robinson R44
|-See also:-External links:* * * * * *...
have a unique teetering bar cyclic control system and a few early helicopters have had a cyclic control that descended into the cockpit from overhead, one example being the HC-2 "Heli Baby", HC-102.

The control is called the cyclic because it changes the pitch
Blade pitch
Blade pitch or simply pitch refers to turning the angle of attack of the blades of a propeller or helicopter rotor into or out of the wind to control the production or absorption of power. Wind turbines use this to adjust the rotation speed and the generated power...
angle of the rotor blades cyclically. That is, the pitch or feathering angle of the rotor blades changes depending upon their position as they rotate around the hub so that all blades will change their angle the same amount at the same point in the cycle. The change in cyclic pitch has the effect of changing the angle of attack
Angle of attack
Angle of attack is a term used in fluid dynamics to describe the angle between a reference line on a lifting body and the vector representing the relative motion between the lifting body and the fluid through which it is moving...
and thus the lift generated by a single blade as it moves around the rotor disk. This in turn causes the blades to fly up or down in sequence, depending on the changes in lift affecting each individual blade.

On any rotor system there is a delay between the point in rotation where a change in pitch is introduced by the flight controls and the point where the desired change is manifest in the rotor blade's flight. While often discussed as gyroscopic precession for ease of teaching, this phase lag varies with the geometry of the rotor system and is the angular difference between the point of application of a cyclic pitch change and the point where the effect of that pitch change reaches maximum amplitude. This lag is an example of a dynamic system in resonance but is never more than ninety degrees.

The collective pitch control, or collective lever, is normally located on the left side of the pilot's seat with an adjustable friction control to prevent inadvertent movement. The collective changes the pitch angle of all the main rotor blades collectively (i.e., all at the same time) and independent of their position. Therefore, if a collective input is made, all the blades change equally, and the result is the helicopter increases or decreases its total lift derived from the rotor. In level flight this would cause a climb or descent, while with the helicopter pitched forward an increase in total lift would produce an acceleration together with a given amount of ascent.

The anti-torque pedals are located in the same position as the rudder
Rudder
A rudder is a device used to steer a ship, boat, submarine, hovercraft, aircraft or other conveyance that moves through a medium . On an aircraft the rudder is used primarily to counter adverse yaw and p-factor and is not the primary control used to turn the airplane...
pedals in an airplane, and serve a similar purpose, namely to control the direction in which the nose of the aircraft is pointed. Application of the pedal in a given direction changes the pitch of the tail rotor blades, increasing or reducing the thrust produced by the tail rotor and causing the nose to yaw
Flight dynamics
Flight dynamics is the science of air vehicle orientation and control in three dimensions. The three critical flight dynamics parameters are the angles of rotation in three dimensions about the vehicle's center of mass, known as pitch, roll and yaw .Aerospace engineers develop control systems for...
in the direction of the applied pedal. The pedals mechanically change the pitch of the tail rotor altering the amount of thrust produced.

Helicopter rotors are designed to operate at a specific rotational speed. The throttle controls the power produced by the engine, which is connected to the rotor by a transmission. The purpose of the throttle is to maintain enough engine power to keep the rotor speed within allowable limits in order to keep the rotor producing enough lift for flight. In many helicopters, the throttle control is a single or dual motorcycle-style twist grip mounted on the collective control (rotation is opposite of a motorcycle throttle), while some multi-engine helicopters have power levers.

There are two basic flight conditions for a helicopter; hover and forward flight
Flight
Flight is the process by which an object moves either through an atmosphere or beyond it by generating lift or propulsive thrust, or aerostatically using buoyancy, or by simple ballistic movement....
.

Hovering is the most challenging part of flying a helicopter. This is because a helicopter is dynamically unstable. The end result is constant control inputs and corrections by the pilot to keep the helicopter where it is required to be. Despite the complexity of the task, the control inputs in a hover are simple. The cyclic is used to eliminate drift in the horizontal plane, that is to control forward and back, right and left. The collective is used to maintain altitude. The pedals are used to control nose direction or heading
Course (navigation)
In navigation, a vehicle's course is the angle that the intended path of the vehicle makes with a fixed reference object . Typically course is measured in degrees from 0° clockwise to 360° in compass convention . Course is customarily expressed in three digits, using preliminary zeros if needed,...
. It is the interaction of these controls that makes hovering difficult, since an adjustment in any one control requires an adjustment of the other two, creating a cycle of constant correction.

In forward flight a helicopter's flight controls behave more like those in a fixed-wing aircraft. Displacing the cyclic forward will cause the nose to pitch down, with a resultant increase in airspeed and loss of altitude. Aft cyclic will cause the nose to pitch up, slowing the helicopter and causing it to climb. Increasing collective (power) while maintaining a constant airspeed will induce a climb while decreasing collective will cause a descent. Coordinating these two inputs, down collective plus aft cyclic or up collective plus forward cyclic, will result in airspeed changes while maintaining a constant altitude. The pedals serve the same function in both a helicopter and an airplane, to maintain balanced flight. This is done by applying a pedal input in whichever direction is necessary to center the ball in the turn and bank indicator
Turn and bank indicator
In aviation, the turn and bank indicator shows the rate of turn and the coordination of the turn. The rate of turn is indicated from a rate gyroscopically and the coordination of the turn is shown by either a pendulum or a heavy ball mounted in a curved sealed glass tube. No pitch information is...
.