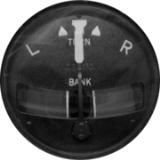 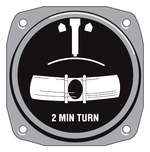 In aviation
Aviation
Aviation is the design, development, production, operation, and use of aircraft, especially heavier-than-air aircraft. Aviation is derived from avis, the Latin word for bird.-History:...
, the turn and bank indicator (or turn and slip indicator) shows the rate of turn and the coordination (slip
Slip (aerodynamic)
A slip is an aerodynamic state where an aircraft is moving somewhat sideways as well as forward relative to the oncoming airflow. In other words, for a conventional aircraft, the nose will not be pointing directly into the relative wind .A slip is also a piloting maneuver where the pilot...
or skid
Skid (aerodynamic)
In flying, a skid is a specific type of slip.It often means a turn where the sideways movement of the aircraft is outwards from the centre of the turn...
) of the turn. The rate of turn is indicated from a rate gyroscopically
Gyroscope
A gyroscope is a device for measuring or maintaining orientation, based on the principles of angular momentum. In essence, a mechanical gyroscope is a spinning wheel or disk whose axle is free to take any orientation...
and the coordination of the turn is shown by either a pendulum
Pendulum
A pendulum is a weight suspended from a pivot so that it can swing freely. When a pendulum is displaced from its resting equilibrium position, it is subject to a restoring force due to gravity that will accelerate it back toward the equilibrium position...
or a heavy ball mounted in a curved sealed glass tube. No pitch information is provided. It was invented in the 1930s by Olaf Johnson, of Northville, NY, and Frank J. Langr, president of the Gloversville (NY) Flying Club.

The rate of turn is the rate at which the airplane is changing its heading, sensed by a rate gyro held in gimbals and restrained by springs. Tick marks, sometimes called "dog houses" on some makes of instruments because of their shape, generally show a 'standard rate turn'. The standard rate (Rate One) for most airplanes is three degrees per second, or two minutes per 360 degrees (marked "2 min. turn"; some turn-and-slip indicators used in faster aircraft like the Concorde
Concorde
Aérospatiale-BAC Concorde was a turbojet-powered supersonic passenger airliner, a supersonic transport . It was a product of an Anglo-French government treaty, combining the manufacturing efforts of Aérospatiale and the British Aircraft Corporation...
are marked "4 min. turn", while gliders
Glider (sailplane)
A glider or sailplane is a type of glider aircraft used in the sport of gliding. Some gliders, known as motor gliders are used for gliding and soaring as well, but have engines which can, in some cases, be used for take-off or for extending a flight...
are usually set to one minute turns). In clouds, using these figures "timed turns" can be made in order to conform with the required Air Traffic patterns. For a change of heading of 90 degrees, a rate one turn for 30 seconds is required. 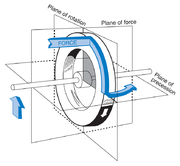 Rate instruments such as the turn-and-slip indicator operate on gyroscopic precession
Precession
Precession is a change in the orientation of the rotation axis of a rotating body. It can be defined as a change in direction of the rotation axis in which the second Euler angle is constant...
. Precession is the characteristic of a gyroscope
Gyroscope
A gyroscope is a device for measuring or maintaining orientation, based on the principles of angular momentum. In essence, a mechanical gyroscope is a spinning wheel or disk whose axle is free to take any orientation...
that causes an applied force to produce a movement, not at the point of application, but at a point 90° from the point of application in the direction of rotation.

The turn indicator is a small gyroscope spun either by air or by an electric motor. The gyro is mounted in a single gimbal
Gimbal
A gimbal is a pivoted support that allows the rotation of an object about a single axis. A set of two gimbals, one mounted on the other with pivot axes orthogonal, may be used to allow an object mounted on the innermost gimbal to remain immobile regardless of the motion of its support...
with its spin axis parallel to the lateral axis of the aircraft and the axis of the gimbal parallel with the longitudinal axis. When the aircraft yaws, or rotates about its vertical axis, it produces a force in the horizontal plane that, due to precession, causes the gyro and its gimbal to rotate about the gimbal axis. It is restrained in this rotation plane by a calibration spring; it rolls over just enough to cause the pointer to deflect until it aligns with one of the doghouse shaped marks on the dial, when the aircraft is making a standard-rate turn.

The ball or pendulum is a "balance indicator" and is called an inclinometer
Inclinometer
An inclinometer or clinometer is an instrument for measuring angles of slope , elevation or depression of an object with respect to gravity...
. It is used to display if a turn is in balance and it does this by measuring the relative strength of the force of gravity and the force of inertia caused by a turn. The ball is placed inside a curved glass tube that is partially filled with a damper liquid, much like the fluid
Fluid
In physics, a fluid is a substance that continually deforms under an applied shear stress. Fluids are a subset of the phases of matter and include liquids, gases, plasmas and, to some extent, plastic solids....
used in a compass
Compass
A compass is a navigational instrument that shows directions in a frame of reference that is stationary relative to the surface of the earth. The frame of reference defines the four cardinal directions – north, south, east, and west. Intermediate directions are also defined...
. When the aircraft is flying straight-and-level, there is no inertia acting on the ball, and it remains in the center of the tube between two wires. 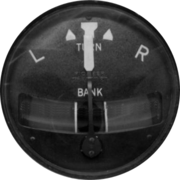 In slow speed aircraft such as gliders, a yaw string
Yaw string
The yaw string, also known as a slip string, is a simple device for indicating a slip or skid in an aircraft in flight. It performs the same function as the slip-skid indicator ball, but is more sensitive, and does not require the pilot to look down at the instrument panel...
can be fitted on the outside of the cockpit canopy. This senses the sideslip (beta) angle directly and the pilot can make corrections to "keep the string in the middle". It often consists of a piece of wool 3 or 4 inches (8 or 10 centimetres) long. The yaw string serves the same purpose as the ball in the turn and slip indicator except that it is more sensitive and removes the need to look at the instrument panel.

The major limitation of the turn-and-slip indicator is that it senses rotation only about the vertical axis of the aircraft. It tells nothing of the rotation around the longitudinal axis (roll), which in normal flight occurs before the aircraft begins to turn. A turn coordinator
Turn coordinator
The turn coordinator is a flight instrument which displays to a pilot information about the rate of yaw , roll, and the coordination of the turn...
partially overcomes this problem by having its gimbal frame angled upward about 30° from the longitudinal axis of the aircraft. Needle movement is then sensitive to both rate of yaw and rate of roll; in a steep turn, initial roll toward level will provide some indication on the needle. This angle is the only functional difference between a turn-and-bank indicator and a turn coordinator.
The source of this article is wikipedia, the free encyclopedia.  The text of this article is licensed under the GFDL.