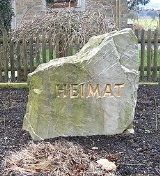 Encyclopedia
Heimat is the overall title of three series of films in 30 episodes written and directed by Edgar Reitz
Edgar Reitz
Edgar Reitz is a German filmmaker and Professor of Film at the Staatliche Hochschule für Gestaltung in Karlsruhe.- Early life and education :...
which view life in Germany
Germany
Germany , officially the Federal Republic of Germany , is a federal parliamentary republic in Europe. The country consists of 16 states while the capital and largest city is Berlin. Germany covers an area of 357,021 km2 and has a largely temperate seasonal climate...
between 1919 and 2000 through the eyes of a family from the Hunsrück
Hunsrück
The Hunsrück is a low mountain range in Rhineland-Palatinate, Germany. It is bounded by the river valleys of the Moselle , the Nahe , and the Rhine . The Hunsrück is continued by the Taunus mountains on the eastern side of the Rhine. In the north behind the Moselle it is continued by the Eifel...
area of the Rhineland
Rhineland
Historically, the Rhinelands refers to a loosely-defined region embracing the land on either bank of the River Rhine in central Europe....
. Personal and domestic life is set against glimpses of wider social and political events. The combined length of the 30 films is 53 hours and 25 minutes, making it one of the longest series of feature-length films in cinema history.

The title Heimat
Heimat
Heimat is a German word that has no simple English translation. It is often expressed with terms such as home or homeland, but these English counterparts fail to encapsulate the true meaning of the word.-The meaning of Heimat:...
is a German
German language
German is a West Germanic language, related to and classified alongside English and Dutch. With an estimated 90 – 98 million native speakers, German is one of the world's major languages and is the most widely-spoken first language in the European Union....
word meaning "homeland". Its use is partly an ironic
Irony
Irony is a rhetorical device, literary technique, or situation in which there is a sharp incongruity or discordance that goes beyond the simple and evident intention of words or actions...
reference to the film genre known as Heimatfilm
Heimatfilm
Heimatfilm is the name given to a film genre that was popular in Germany, Switzerland and Austria from the late 40s to the early 70s. They were usually shot in the Alps, the Black Forest or the Lüneburg Heath and always involved the outdoors...
which was popular in Germany in the 1950s. Heimatfilms were noted for their rural settings, sentimental tone and simplistic morality.

Heimat, the original series, premiered in 1984 and follows the life of Maria Simon (Marita Breuer
Marita Breuer
Marita Breuer is a German actress, known for her portrayal of Maria in the Heimat TV series.- Biography :Marita Breuer studied acting at the Folkwang University of the Arts...
), a woman living in the fictional village
Village
A village is a clustered human settlement or community, larger than a hamlet with the population ranging from a few hundred to a few thousand , Though often located in rural areas, the term urban village is also applied to certain urban neighbourhoods, such as the West Village in Manhattan, New...
of Schabbach (the village of Woppenroth
Woppenroth
-Geology:In the Hahnenbach valley and its side valleys, Devonian slate was mined until the early 20th century. All that now bears witness to this epoch in the village’s history is some gallery entrances and tailing heaps.-History:...
in Rhein-Hunsrück
Rhein-Hunsrück
Rhein-Hunsrück is a district in the middle of Rhineland-Palatinate, Germany. The neighbouring districts are Mayen-Koblenz, Rhein-Lahn, Mainz-Bingen, Bad Kreuznach, Birkenfeld, Bernkastel-Wittlich, Cochem-Zell.-History:...
was used for filming). The film spans the years 1919 to 1982. Subtitled Eine Deutsche Chronik — A German Chronicle, it consists of 11 episode
Episode
An episode is a part of a dramatic work such as a serial television or radio program. An episode is a part of a sequence of a body of work, akin to a chapter of a book. The term sometimes applies to works based on other forms of mass media as well, as in Star Wars...
s running in total to 15 hours 24 minutes of screen time and depicts how the events of German history
History of Germany
The concept of Germany as a distinct region in central Europe can be traced to Roman commander Julius Caesar, who referred to the unconquered area east of the Rhine as Germania, thus distinguishing it from Gaul , which he had conquered. The victory of the Germanic tribes in the Battle of the...
affected the Simon family and the community in which they lived.

Die Zweite Heimat (literally The Second Heimat, and called, in the English
English language
English is a West Germanic language that arose in the Anglo-Saxon kingdoms of England and spread into what was to become south-east Scotland under the influence of the Anglian medieval kingdom of Northumbria...
version, Leaving Home) (subtitled Chronik einer Jugend — Chronicle of a Youth) followed in 1992. It tells the story of how Maria's youngest son Hermann leaves his rural home and makes a new life for himself as a composer
Composer
A composer is a person who creates music, either by musical notation or oral tradition, for interpretation and performance, or through direct manipulation of sonic material through electronic media...
in Munich
Munich
Munich The city's motto is "" . Before 2006, it was "Weltstadt mit Herz" . Its native name, , is derived from the Old High German Munichen, meaning "by the monks' place". The city's name derives from the monks of the Benedictine order who founded the city; hence the monk depicted on the city's coat...
during the socially turbulent years of the 1960s.

Hermann is a musical prodigy whose teenage romance with 26-year old soul mate Klärchen was considered scandalous by his conservative home village. It resulted in her being expelled and coerced not to contact him ever again. Hermann was crushed and vowed never to love again and to leave his wicked village forever. He arrives in Munich at age 19, overwhelmed and with no place to stay. He finds a private room opening in a month, leaving the deposit with a flamboyant Hungarian woman. His friend Renate, a law student, allows Hermann to sleep on her floor but he is put off by her sexual advances. He finally rooms with Clemens, a fellow Hunsrücker who plays jazz drums in Munich's clubs. Hermann is accepted into the music conservatory, where he meets the incredibly talented Juan from Chile, whose school application is rejected on the grounds his marimbas are "folklore". Hermann and Juan network with the avant-garde culture surrounding the conservatory, including film students, while Hermann takes on odd jobs and Juan works as a gymnast teacher. Both Juan and Hermann have a brief fling with the beautiful cellist Clarissa, who fears intimacy but is drawn to those who fear it too. The students are gradually drawn to the Foxhole, a mansion headed by a wealthy art patroness said to be a "collector of artists".

Heimat 3 (subtitled Chronik einer Zeitenwende — Chronicle of a Changing Time) premiered in 2004. It picks up Hermann's story in 1989 as he returns to Schabbach and depicts the events of the period from the fall of the Berlin Wall
Berlin Wall
The Berlin Wall was a barrier constructed by the German Democratic Republic starting on 13 August 1961, that completely cut off West Berlin from surrounding East Germany and from East Berlin...
until 2000. The cinema version consists of six episodes running to 11 hours 29 minutes, although controversially the version broadcast on the German ARD television network in December 2004 was edited to six ninety-minute episodes http://www.heimat-komplett.de/index.html.

When asked in 2005 if he would make a Heimat 4 Reitz replied "For 25 years, Heimat has dominated my life. At the moment, I'm calling it a trilogy, because it's a symbolic way of finishing it. But it is always possible to continue it because, by its very nature, Heimat is something that can never end."

Heimat has been criticized for its selective interpretation of German history. There is little treatment of the hyperinflationary spiral of the 1920s
Inflation in the Weimar Republic
The hyperinflation in the Weimar Republic was a three year period of hyperinflation in Germany between June 1921 and July 1924.- Analysis :...
, the Great Depression
Great Depression
The Great Depression was a severe worldwide economic depression in the decade preceding World War II. The timing of the Great Depression varied across nations, but in most countries it started in about 1929 and lasted until the late 1930s or early 1940s...
, or the Holocaust of World War II
World War II
World War II, or the Second World War , was a global conflict lasting from 1939 to 1945, involving most of the world's nations—including all of the great powers—eventually forming two opposing military alliances: the Allies and the Axis...
. Schabbach is also depicted as unusually idyllic, with no shops or markets, no financial crisis, and no personal conflict during the first half of the movie. Its themes of decadent American values and Western corporate greed rising up against the innocent simplicity of the Hunsrück have been seen as "resurrecting a discourse that prevailed in the nineteenth century about the modernization of Germany's society and economy ... no compromises or delicate balances are possible".

Heimat was one of director Stanley Kubrick
Stanley Kubrick
Stanley Kubrick was an American film director, writer, producer, and photographer who lived in England during most of the last four decades of his career...
's favourite films. It is ranked #59 in Empire
Empire (magazine)
Empire is a British film magazine published monthly by Bauer Consumer Media. From the first issue in July 1989, the magazine was edited by Barry McIlheney and published by Emap. Bauer purchased Emap Consumer Media in early 2008...
magazines "The 100 Best Films Of World Cinema" in 2010.