Encyclopedia
A heavy tank was a subset of tank
Tank
A tank is a tracked, armoured fighting vehicle designed for front-line combat which combines operational mobility, tactical offensive, and defensive capabilities...
that filled the heavy direct-fire role of many armies.

Heavy tanks have usually been deployed to breakthrough enemy lines, though in practice have been more useful in the defensive role than in the attack. Design goals have included attacking obstacles, creating breakthroughs, and engaging enemy armoured formations.

Heavy tanks achieved their greatest successes both fighting other, lighter tanks, and destroying fortifications with their very large guns. Although it is often assumed that heavy tanks suffered inferior mobility to mediums
Medium tank
Medium tank was a classification of tanks; the medium being intermediate in size and weight and armament between heavy tanks and light tanks.The medium tank concept has been eclipsed by the main battle tank.-History:...
, this was not always the case, as many of the more sophisticated heavy tank designs featured advanced suspension and transmission precisely to counteract this drawback. But the greatest drawback is cost which translates into production, resulting in short supplies. The German Tiger I
Tiger I
Tiger I is the common name of a German heavy tank developed in 1942 and used in World War II. The final official German designation was Panzerkampfwagen Tiger Ausf. E, often shortened to Tiger. It was an answer to the unexpectedly formidable Soviet armour encountered in the initial months of...
, for example, had similar speed and better terrain-handling characteristics when compared to the significantly lighter Panzer IV
Panzer IV
The Panzerkampfwagen IV , commonly known as the Panzer IV, was a medium tank developed in Nazi Germany in the late 1930s and used extensively during the Second World War. Its ordnance inventory designation was Sd.Kfz...
medium tank, albeit at the cost of low reliability and only 1,355 were produced compared to 8,800 Panzer IV and 58,000 Soviet T-34 and 40,000 American M4 Sherman
M4 Sherman
The M4 Sherman, formally Medium Tank, M4, was the primary tank used by the United States during World War II. Thousands were also distributed to the Allies, including the British Commonwealth and Soviet armies, via lend-lease...
medium tanks.

Heavy tanks feature very heavy armour and weapons relative to lighter tanks, though they tend to push power plants to the limits. As a result they tend to be either underpowered and comparatively slow, or have engine and drive train problems from overworking their engines.
Heavy tanks tend to have excellent protection compared to their lighter cousins. 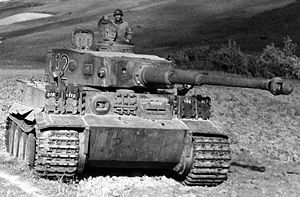 The first British tank, the Mark I
Mark I tank
The British Mark I was a tracked vehicle developed by the British Army during the First World War and the world's first combat tank. The Mark I entered service in August 1916, and was first used in action on the morning of 15 September 1916 during the Battle of Flers-Courcelette, of the Somme...
of World War I, was introduced to break through the German defensive lines of trenches and barbed wire. When a lighter faster tank was introduced this was designated "Medium Mark A" (and known as Whippet) and the larger tanks known as "heavies".

The Char 2C
Char 2C
The Char 2C was a French super-heavy tank developed, although never deployed, during World War I. It was the largest operational tank ever.-Development:...
was one of the largest tanks ever produced. At the start of World War II, the French and the Soviets were the only countries to have inventories of heavy tanks, such as the Char B1
Char B1
The Char B1 was a French heavy tank manufactured before World War II.The Char B1 was a specialised heavy break-through vehicle, originally conceived as a self-propelled gun with a 75 mm howitzer in the hull; later a 47 mm gun in a turret was added, to allow it to function also as a Char...
, T-35
T-35
The T-35 was a Soviet multi-turreted heavy tank of the interwar period and early Second World War that saw limited production and service with the Red Army. It was the only five-turreted heavy tank in the world to reach production but proved to be slow and mechanically unreliable...
, and KV-1. The Matilda II infantry tank, though not weighing as much as the others, was designed to the British infantry tank
Infantry tank
The infantry tank was a concept developed by the British and French in the years leading up to World War II. Infantry tanks were tanks designed to support the infantry in the attack. To achieve this they were generally heavily armoured compared to the cruiser tanks, to allow them to operate in...
concept and had thicker armour than most tanks in service at the time. Later war examples were the German Tiger I
Tiger I
Tiger I is the common name of a German heavy tank developed in 1942 and used in World War II. The final official German designation was Panzerkampfwagen Tiger Ausf. E, often shortened to Tiger. It was an answer to the unexpectedly formidable Soviet armour encountered in the initial months of...
and II
Tiger II
Tiger II is the common name of a German heavy tank of the Second World War. The final official German designation was Panzerkampfwagen Tiger Ausf. B,Panzerkampfwagen – abbr: Pz. or Pz.Kfw. Ausführung – abbr: Ausf. .The full titles Panzerkampfwagen Tiger Ausf...
, as well as the Soviet IS series. Note that "heavy" versus "medium" is more a question of tactical roles than weight; the Panther
Panther tank
Panther is the common name of a medium tank fielded by Nazi Germany in World War II that served from mid-1943 to the end of the European war in 1945. It was intended as a counter to the T-34, and to replace the Panzer III and Panzer IV; while never replacing the latter, it served alongside it as...
, for example, was a "medium" tank that outweighed most Allied "heavy" tanks. 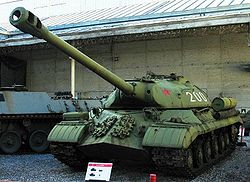 The immediate post-war period saw the final fielding of heavy tanks, including the US M103 heavy tank
M103 heavy tank
The M103 heavy tank served the United States Army and the US Marines during the Cold War. Until the development of the M1A1 in the mid 1980s, it was the heaviest and most heavily armed tank in US service...
, the British FV214 Conqueror, and the French ARL 44
ARL 44
The ARL 44 was a French heavy tank produced just after World War II. Only sixty of these tanks were ever manufactured and the type was quickly phased out.-Development:...
, all in response to the Soviet heavy tanks of the period. The largest tank guns were approaching maximum calibre whose shell could still be handled by the crew, even using awkward two-part ammunition (separate projectile and propellant case), which greatly slowed their rate of fire. Thanks to improved gun designs and fire control technology, postwar medium tanks were catching up to heavy tanks in firepower. The tactical value of heavy tanks thus declined to the point that no new designs were fielded; the heavily-armed mediums came to be known as the main battle tank
Main battle tank
A main battle tank , also known as a battle tank or universal tank, is a tank that fills the heavy direct fire role of many modern armies. They were originally conceived to replace the light, medium, heavy and super-heavy tanks. Development was spurred onwards in the Cold War with the development...
(MBT) - although some modern MBTs such as the M1 Abrams
M1 Abrams
The M1 Abrams is a third-generation main battle tank produced in the United States. It is named after General Creighton Abrams, former Army Chief of Staff and Commander of US military forces in Vietnam from 1968 to 1972. The M1 is a well armed, heavily armored, and highly mobile tank designed for...
and Challenger 2 actually have weights similar to Cold War
Cold War
The Cold War was the continuing state from roughly 1946 to 1991 of political conflict, military tension, proxy wars, and economic competition between the Communist World—primarily the Soviet Union and its satellite states and allies—and the powers of the Western world, primarily the United States...
heavies. Less expensive self-propelled artillery
Self-propelled artillery
Self-propelled artillery vehicles are combat vehicles armed with artillery. Within the term are covered self-propelled guns and rocket artillery...
could serve as in the infantry support role.