Encyclopedia
The Harrach family is a Bohemian and Austro-German noble family. The Grafs (Counts) von Harrach were among the most prominent families in the Habsburg Empire. 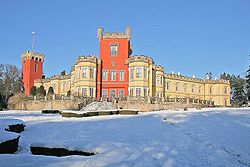 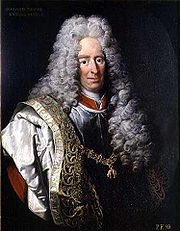 Many of its members bear the title 'Graf' (count
Count
A count or countess is an aristocratic nobleman in European countries. The word count came into English from the French comte, itself from Latin comes—in its accusative comitem—meaning "companion", and later "companion of the emperor, delegate of the emperor". The adjective form of the word is...
/earl
Earl
An earl is a member of the nobility. The title is Anglo-Saxon, akin to the Scandinavian form jarl, and meant "chieftain", particularly a chieftain set to rule a territory in a king's stead. In Scandinavia, it became obsolete in the Middle Ages and was replaced with duke...
) or 'Gräfin' (countess). Members of the family are, among others: