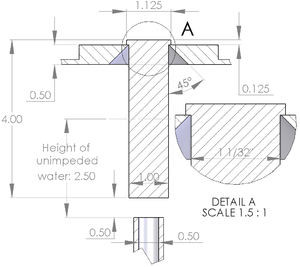 The hardenability of a metal
Metal
A metal , is an element, compound, or alloy that is a good conductor of both electricity and heat. Metals are usually malleable and shiny, that is they reflect most of incident light...
alloy
Alloy
An alloy is a mixture or metallic solid solution composed of two or more elements. Complete solid solution alloys give single solid phase microstructure, while partial solutions give two or more phases that may or may not be homogeneous in distribution, depending on thermal history...
is its capability to be hardened by heat treatment
Heat treatment
Heat treating is a group of industrial and metalworking processes used to alter the physical, and sometimes chemical, properties of a material. The most common application is metallurgical. Heat treatments are also used in the manufacture of many other materials, such as glass...
. It should not be confused with hardness, which is a measure of a sample's resistance to indentation or scratching. It is an important property for welding
Welding
Welding is a fabrication or sculptural process that joins materials, usually metals or thermoplastics, by causing coalescence. This is often done by melting the workpieces and adding a filler material to form a pool of molten material that cools to become a strong joint, with pressure sometimes...
, since it is inversely proportional to weldability
Weldability
The weldability, also known as joinability, of a material refers to its ability to be welded. Many metals and thermoplastics can be welded, but some are easier to weld than others...
, that is, the ease of welding a material.

The hardenability of ferrous
Ferrous
Ferrous , in chemistry, indicates a divalent iron compound , as opposed to ferric, which indicates a trivalent iron compound ....
alloys, i.e. steel
Steel
Steel is an alloy that consists mostly of iron and has a carbon content between 0.2% and 2.1% by weight, depending on the grade. Carbon is the most common alloying material for iron, but various other alloying elements are used, such as manganese, chromium, vanadium, and tungsten...
s, is a function of the carbon
Carbon
Carbon is the chemical element with symbol C and atomic number 6. As a member of group 14 on the periodic table, it is nonmetallic and tetravalent—making four electrons available to form covalent chemical bonds...
content and other alloying elements and the grain size of the austenite
Austenite
Austenite, also known as gamma phase iron, is a metallic non-magnetic allotrope of iron or a solid solution of iron, with an alloying element. In plain-carbon steel, austenite exists above the critical eutectoid temperature of ; other alloys of steel have different eutectoid temperatures...
. The relative importance of the various alloying elements is calculated by finding the equivalent carbon content
Equivalent carbon content
The equivalent carbon content concept is used on ferrous materials, typically steel and cast iron, to determine various properties of the alloy when more than just carbon is used as an alloyant, which is typical...
of the material. The fluid used for quench
Quench
In materials science, quenching is the rapid cooling of a workpiece to obtain certain material properties. It prevents low-temperature processes, such as phase transformations, from occurring by only providing a narrow window of time in which the reaction is both thermodynamically favorable and...
ing the material influences the cooling rate due to varying thermal conductivities
Thermal conductivity
In physics, thermal conductivity, k, is the property of a material's ability to conduct heat. It appears primarily in Fourier's Law for heat conduction....
and specific heats. Substances like brine
Brine
Brine is water, saturated or nearly saturated with salt .Brine is used to preserve vegetables, fruit, fish, and meat, in a process known as brining . Brine is also commonly used to age Halloumi and Feta cheeses, or for pickling foodstuffs, as a means of preserving them...
and water
Water
Water is a chemical substance with the chemical formula H2O. A water molecule contains one oxygen and two hydrogen atoms connected by covalent bonds. Water is a liquid at ambient conditions, but it often co-exists on Earth with its solid state, ice, and gaseous state . Water also exists in a...
cool much more quickly than oil
Oil
An oil is any substance that is liquid at ambient temperatures and does not mix with water but may mix with other oils and organic solvents. This general definition includes vegetable oils, volatile essential oils, petrochemical oils, and synthetic oils....
or air. Additionally, if the fluid is agitated cooling occurs even more quickly. The geometry of the part also affects the cooling rate: of two samples of equal volume, the one with higher surface area will cool faster.

The hardenability of a ferrous alloy is measured by a Jominy test: a round metal bar of standard size is transformed to 100% austenite through heat treatment, and is then quenched on one end with room-temperature water. The cooling rate will be highest at the end being quenched, and will decrease as distance from the end increases. The hardenability is then found by measuring the hardness along the bar: the farther away from the quenched end that the hardness extends, the higher the hardenability.