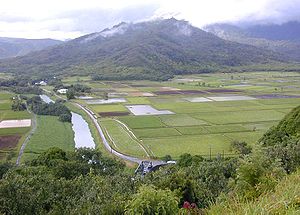 The Hanalei River on the island of Kauai
Kauai
Kauai or Kauai, known as Tauai in the ancient Kaua'i dialect, is geologically the oldest of the main Hawaiian Islands. With an area of , it is the fourth largest of the main islands in the Hawaiian archipelago, and the 21st largest island in the United States. Known also as the "Garden Isle",...
in Hawaii
Hawaii
Hawaii is the newest of the 50 U.S. states , and is the only U.S. state made up entirely of islands. It is the northernmost island group in Polynesia, occupying most of an archipelago in the central Pacific Ocean, southwest of the continental United States, southeast of Japan, and northeast of...
flows north from the eastern slopes Mount Waialeale
Mount Waialeale
Mount Waialeale at an elevation of , is a shield volcano and the second highest point on the island of Kauai in the Hawaiian Islands. Averaging more than of rain a year since 1912, with a record in 1982, its summit is one of the rainiest spots on earth....
for 15.7 miles (25.3 km) until entering the Pacific Ocean
Pacific Ocean
The Pacific Ocean is the largest of the Earth's oceanic divisions. It extends from the Arctic in the north to the Southern Ocean in the south, bounded by Asia and Australia in the west, and the Americas in the east.At 165.2 million square kilometres in area, this largest division of the World...
at Hanalei Bay
Hanalei Bay
Hanalei Bay is the largest bay on the north shore of Kauai island in Hawaii. The town of Hanalei is at the mid-point of the bay.Hanalei Bay consists of nearly two miles of beach, surrounded by mountains. In the summer, the bay offers excellent mooring for sailboats, stand up paddle boarding and...
as an estuary
Estuary
An estuary is a partly enclosed coastal body of water with one or more rivers or streams flowing into it, and with a free connection to the open sea....
. With a long-term mean discharge of 216 cubic feet (6.12 cubic meters) per second, in terms of water flow it is the second-largest river in the state; although its watershed of 19.1 square miles (49.5 km²) is only sixth-largest on Kauai, it encompasses areas of the highest recorded rainfall on the planet and plunges precipitously from its headwaters at 3500 feet (1,066.8 m) above sea level.

The lower, flatter portion of the river flows by Hanalei National Wildlife Refuge
Hanalei National Wildlife Refuge
The Hanalei National Wildlife Refuge is a National Wildlife Refuge on the island of Kauai in Hawaii. It is located within the Hanalei River Valley along the island's northern shore...
and many taro
Taro
Taro is a common name for the corms and tubers of several plants in the family Araceae . Of these, Colocasia esculenta is the most widely cultivated, and is the subject of this article. More specifically, this article describes the 'dasheen' form of taro; another variety is called eddoe.Taro is...
farms (60% of Hawaii's taro is grown in this area). The Hanalei River provides habitat for a number of amphidromous
Fish migration
Many types of fish migrate on a regular basis, on time scales ranging from daily to annually or longer, and over distances ranging from a few metres to thousands of kilometres...
species, including gobies
Goby
The gobies form the family Gobiidae, which is one of the largest families of fish, with more than 2,000 species in more than 200 genera. Most are relatively small, typically less than 10 cm in length...
(5 native varieties), two native species of crustacean
Crustacean
Crustaceans form a very large group of arthropods, usually treated as a subphylum, which includes such familiar animals as crabs, lobsters, crayfish, shrimp, krill and barnacles. The 50,000 described species range in size from Stygotantulus stocki at , to the Japanese spider crab with a leg span...
, the hīhīwai (Neritina granosa
Neritina granosa
Neritina granosa is a species of freshwater snail with an operculum, an aquatic gastropod mollusk in the family Neritidae, the nerites.-Distribution:This species of nerite is endemic in Hawaii: Maui.- Ecology :...
, an edible snail), and in its upper reaches, a threatened species
Threatened species
Threatened species are any speciesg animals, plants, fungi, etc.) which are vulnerable to endangerment in the near future.The World Conservation Union is the foremost authority on threatened species, and treats threatened species not as a single category, but as a group of three categories,...
of highly-adapted snail (Newcomb's snail
Newcomb's snail
Newcomb's snail, scientific name Erinna newcombi, is a species of air-breathing freshwater snail, a gastropod mollusk in the family Lymnaeidae. This species is endemic to Hawaii, in the United States. Its natural habitat is rivers...
, Erinna newcombi).

The Hanalei was designated an American Heritage River
American Heritage Rivers
American Heritage Rivers are designated by the United States Environmental Protection Agency to receive special attention to further three objectives: natural resource and environmental protection, economic revitalization, and historic and cultural preservation.The American Heritage Rivers...
by US President Bill Clinton
Bill Clinton
William Jefferson "Bill" Clinton is an American politician who served as the 42nd President of the United States from 1993 to 2001. Inaugurated at age 46, he was the third-youngest president. He took office at the end of the Cold War, and was the first president of the baby boomer generation...
on July 30, 1998.
The major bridge across the river (still one lane) is on Hawaii Route 560
Hawaii Route 560
Route 560 or Kaua'i Belt Road-North Shore section, is a ten-mile scenic road on the northern shore of the island of Kauai in Hawaii. The entire belt road is signed as the Kuhio Highway and Hawaii Route 56 was once signed on this route before it was downgraded to become Hawaii Route 560...
, which is listed on the National Register of Historic Places listings in Hawaii.