Rocketdyne
Rocketdyne
Rocketdyne was a Rocket engine design and production company headquartered in Canoga Park, California, United States. The company was related to North American Aviation for most of its history. NAA merged with Rockwell International, which was then bought by Boeing in December, 1996...
's H-1 is a 205000 lbf (911.9 kN) thrust liquid-propellant rocket engine burning LOX
Lox
Lox is salmon fillet that has been cured. In its most popular form, it is thinly sliced—less than in thickness—and, typically, served on a bagel, often with cream cheese, onion, tomato, cucumber and capers...
and RP-1
RP-1
RP-1 is a highly refined form of kerosene outwardly similar to jet fuel, used as a rocket fuel. Although having a lower specific impulse than liquid hydrogen , RP-1 is cheaper, can be stored at room temperature, is far less of an explosive hazard and is far denser...
. The H-1 was developed for use in the S-IB
S-IB
The S-IB stage was the first stage of the Saturn IB launch vehicle, which was used for Earth orbital missions. It was composed of nine propellant containers, eight fins, a thrust structure assembly, eight H-1 rocket engines, and many other components...
first stage of the Saturn I  and Saturn IB
Saturn IB
The Saturn IB was an American launch vehicle commissioned by the National Aeronautics and Space Administration for use in the Apollo program...
rockets, where it was used in clusters of eight engines. This was the H-1's only use.

When Heinz-Hermann Koelle
Heinz-Hermann Koelle
Heinz-Hermann Koelle was an aeronautical engineer who made the preliminary designs on the rocket that would emerge as the Saturn I...
first drew up plans for what would become the Saturn, he selected Rocketdyne's E-1
E-1 (rocket engine)
Rocketdyne's E-1 was a liquid propellant rocket engine originally built as a backup design for the Titan I missile. While it was being developed, Heinz-Hermann Koelle at the Army Ballistic Missile Agency selected it as the primary engine for the rocket that would emerge as the Saturn I...
to power it, with four engines in the lower stage. Rocketdyne was developing this 400000 lbf (1,779.3 kN) engine for the Titan missile, and it was the largest engine available in the time frame that ARPA
ARPA
Arpa and ARPA may refer to:Arpa* Arpa River in Armenia* Areni, Armenia - formerly called Arpa* Arpi, Armenia, also called Arpa* Turkish for Akhurian River in Turkey and Armenia* Italian for harp, sometimes used in scoresARPA...
gave Wernher von Braun
Wernher von Braun
Wernher Magnus Maximilian, Freiherr von Braun was a German rocket scientist, aerospace engineer, space architect, and one of the leading figures in the development of rocket technology in Nazi Germany during World War II and in the United States after that.A former member of the Nazi party,...
to develop what was then known as the "Juno V". In 1957, after the launch of Sputnik 1
Sputnik 1
Sputnik 1 ) was the first artificial satellite to be put into Earth's orbit. It was launched into an elliptical low Earth orbit by the Soviet Union on 4 October 1957. The unanticipated announcement of Sputnik 1s success precipitated the Sputnik crisis in the United States and ignited the Space...
, the U.S. developed plans to start a civilian space agency, which quickly developed into NASA
NASA
The National Aeronautics and Space Administration is the agency of the United States government that is responsible for the nation's civilian space program and for aeronautics and aerospace research...
. As the Army had lost interest in large rockets, they agreed to turn over von Braun's ABMA team to NASA, becoming the Marshall Space Flight Center
Marshall Space Flight Center
The George C. Marshall Space Flight Center is the U.S. government's civilian rocketry and spacecraft propulsion research center. The largest center of NASA, MSFC's first mission was developing the Saturn launch vehicles for the Apollo moon program...
. The handover would take place in 1960.

Shortly after these plans were made, ARPA visited ABMA and told von Braun that they still had $10 million in their budget to spend before the handover. They asked if there was anything they could do before the handover that could effectively use the money. von Braun called in Koelle and showed them a model of the Juno V, but the ARPA visitors noted that the E-1 engine wouldn't be ready by 1960. Brainstorming, they decided that the best approach was to make a minor upgrade to Rocketdyne's existing 175,000 lbf engines to boost them to 200000 lbf (889.6 kN), and use eight of these new engines instead of four E-1s. A contract for development was soon tendered, and by early 1959 the name had changed from Juno to Saturn, meaning "the planet after Jupiter", the Jupiter missile being the previous ABMA design. Rocketdyne had several engine designs in the pipeline at that point, the E-1, the F-1
F-1 (rocket engine)
The F-1 is a rocket engine developed by Rocketdyne and used in the Saturn V. Five F-1 engines were used in the S-IC first stage of each Saturn V, which served as the main launch vehicle in the Apollo program. The F-1 is still the most powerful single-chamber liquid-fueled rocket engine ever...
being developed for the US Air Force, and a proposal for a fluorine-burning G-1 - the new design became the H-1. 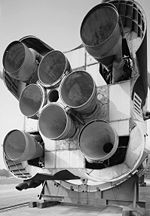 Like all of Rocketdyne's early engines, the H-1 used a waterfall injector fed by turbopumps, and regeneratively cooled the engine using the engine's fuel.

Unlike the J-2
J-2 (rocket engine)
Rocketdyne's J-2 rocket engine was a major component of the Saturn V rocket used in the Apollo program to send men to the Moon. Five J-2 engines were used on the S-II second stage, and one J-2 was used on the S-IVB third stage. The S-IVB was also used as the second stage of the smaller Saturn IB...
engine used on the S-IVB
S-IVB
The S-IVB was built by the Douglas Aircraft Company and served as the third stage on the Saturn V and second stage on the Saturn IB. It had one J-2 engine...
stage, the H-1 was a single-start engine. It could be fired multiple times—and engines were usually subject to two or more static test firings before a mission to flight-qualify them—but it could not be restarted in flight, because some components required for the startup sequence were non-reusable. In particular, the engine was ignited by a Solid Propellant Gas Generator
Gas generator
A gas generator usually refers to a device, often similar to a solid rocket or a liquid rocket that burns to produce large volumes of relatively cool gas, instead of maximizing the temperature and specific impulse. The low temperature allows the gas to be put to use more easily in many...
(SPGG), which was essentially a small solid rocket, and had to be replaced after each firing.

To start the engine a 500V AC voltage was applied to the SPGG, which ignited the solid propellant. This produced hot gas which was allowed to build up until reaching a pressure of 600-700 psi, after which a bursting diaphragm released it into the turbine which drove the fuel turbopumps. This began the process of pumping fuel and oxidizer into the engine, and the hot gases from the SPGG provided the initial energy required to ignite the fuel/oxidizer mix. Once the fuel and oxidizer were being pumped and burning, the process was self-sustaining until engine shutdown.