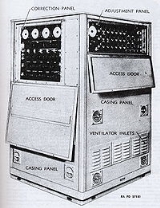 Encyclopedia
The gun data computer is a series of artillery computers used by the U.S. Army, for coastal artillery
Coastal artillery
Coastal artillery is the branch of armed forces concerned with operating anti-ship artillery or fixed gun batteries in coastal fortifications....
, field artillery
Field artillery
Field artillery is a category of mobile artillery used to support armies in the field. These weapons are specialized for mobility, tactical proficiency, long range, short range and extremely long range target engagement....
, and antiaircraft artillery applications. In antiaircraft applications they are used in conjunction with a director
Director (military)
A director, also called an auxiliary predictor, is a mechanical or electronic computer that continuously calculates trigonometric firing solutions for use against a moving target, and transmits targeting data to direct the weapon firing crew....
. 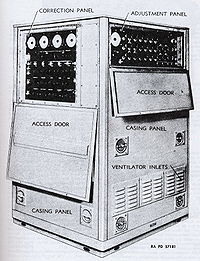 
The last TACFIRE fielding was completed in 1987. Replacement of TACFIRE equipment began in 1994.

Components of the system were identified using acronyms:

The successor to the TACFIRE system is the Advanced Field Artillery Tactical Data System (AFATDS).

One reason for a lack of surviving examples of early units, was the use of radium
Radium
Radium is a chemical element with atomic number 88, represented by the symbol Ra. Radium is an almost pure-white alkaline earth metal, but it readily oxidizes on exposure to air, becoming black in color. All isotopes of radium are highly radioactive, with the most stable isotope being radium-226,...
on the dials, this in essence made them hazardous waste
Hazardous waste
A hazardous waste is waste that poses substantial or potential threats to public health or the environment. According to the U.S. environmental laws hazardous wastes fall into two major categories: characteristic wastes and listed wastes.Characteristic hazardous wastes are materials that are known...
, and therefore these type were disposed of by the United States Department of Energy
United States Department of Energy
The United States Department of Energy is a Cabinet-level department of the United States government concerned with the United States' policies regarding energy and safety in handling nuclear material...
. Currently there is one surviving example of FADAC at the Fort Sill
Fort Sill
Fort Sill is a United States Army post near Lawton, Oklahoma, about 85 miles southwest of Oklahoma City.Today, Fort Sill remains the only active Army installation of all the forts on the South Plains built during the Indian Wars...
artillery museum.http://sill-www.army.mil/famuseum/