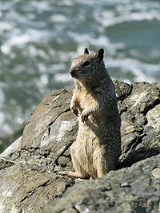 Encyclopedia
The ground squirrels are members of the squirrel family of rodents (the Sciuridae) which generally live on or in the ground, rather than trees. The term is most often used for the medium-sized ground squirrels, as the larger ones are more commonly known as marmots (genus Marmota) or prairie dogs, while the smaller and less bushy-tailed ground squirrels tend to be known as chipmunk
Chipmunk
Chipmunks are small striped squirrels native to North America and Asia. They are usually classed either as a single genus with three subgenera, or as three genera.-Etymology and taxonomy:...
s. Together, they make up the "Marmot tribe
Tribe (biology)
In biology, a tribe is a taxonomic rank between family and genus. It is sometimes subdivided into subtribes.Some examples include the tribes: Canini, Acalypheae, Hominini, Bombini, and Antidesmeae.-See also:* Biological classification* Rank...
" of squirrels, the Marmotini, and the large and mainly ground squirrel subfamily Xerinae
Xerinae
Xerinae is a subfamily of squirrels, many of which are highly terrestrial. It includes the tribes Marmotini , Xerini , and Protoxerini .-References:* Thorington, R. W. and R. S. Hoffmann. 2005. Family Sciuridae. Pp 754-818 in Wilson, E. D...
, and containing six living genera. Well-known members of this largely Holarctic
Holarctic
The Holarctic ecozone refers to the habitats found throughout the northern continents of the world as a whole. This region is divided into the Palearctic, consisting of Northern Africa and all of Eurasia, with the exception of Southeast Asia and the Indian subcontinent, and the Nearctic,...
group are the marmot
Marmot
The marmots are a genus, Marmota, of squirrels. There are 14 species in this genus.Marmots are generally large ground squirrels. Those most often referred to as marmots tend to live in mountainous areas such as the Alps, northern Apennines, Eurasian steppes, Carpathians, Tatras, and Pyrenees in...
s (Marmota), including the American groundhog
Groundhog
The groundhog , also known as a woodchuck, whistle-pig, or in some areas as a land-beaver, is a rodent of the family Sciuridae, belonging to the group of large ground squirrels known as marmots. Other marmots, such as the yellow-bellied and hoary marmots, live in rocky and mountainous areas, but...
, the chipmunks, the susliks (Spermophilus), and the prairie dog
Prairie dog
Prairie dogs are burrowing rodents native to the grasslands of North America. There are five different species of prairie dogs: black-tailed, white-tailed, Gunnison's, Utah and Mexican prairie dogs. They are a type of ground squirrel, found in the United States, Canada and Mexico...
s (Cynomys). They are highly variable in size and habitus
Morphology (biology)
In biology, morphology is a branch of bioscience dealing with the study of the form and structure of organisms and their specific structural features....
, but most are remarkably able to rise up on their hind legs and stand fully erect comfortably for prolonged periods. They also tend to be far more gregarious than other squirrels and many live in colonies with complex social structure. Most Marmotini are rather short-tailed and large squirrels, and the Alpine Marmot
Alpine Marmot
The Alpine Marmot is a species of marmot found in mountainous areas of central and southern Europe. Alpine marmots live at heights between 800 and 3,200 metres in the Alps, Carpathians, Tatras, the Pyrenees and Northern Apennines in Italy...
(Marmota marmota) is the largest living member of the Sciuridae, at 53–73 cm in length and weighing 5–8 kg.

The chipmunk
Chipmunk
Chipmunks are small striped squirrels native to North America and Asia. They are usually classed either as a single genus with three subgenera, or as three genera.-Etymology and taxonomy:...
s of the genus Tamias frequently spend time in trees. Also closer to typical squirrels in other aspects, they are occasionally considered a tribe of their own (Tamiini).

The ground squirrel is especially renowned for its tendency to rise up on its hind legs. It does this whenever it senses nearby danger, or when it must see over tall grasses. The squirrel then curls its paws flat against its chest and sends a screeching call to warn other family members about the presence of predators.

Ground squirrels may carry fleas that transmit diseases to humans (see Black Plague), and have been destructive in tunneling underneath human habitation Though capable of climbing, ground squirrels spend little time in trees.

Palaeosciurus from Europe
Europe
Europe is, by convention, one of the world's seven continents. Comprising the westernmost peninsula of Eurasia, Europe is generally 'divided' from Asia to its east by the watershed divides of the Ural and Caucasus Mountains, the Ural River, the Caspian and Black Seas, and the waterways connecting...
is the oldest known ground squirrel, and it does not seem to be particularly close to any of the two to three living lineages (subtribes) of Marmotini. The oldest fossils are from the Early Oligocene, more than 30 mya (million years ago), but the genus probably persisted at least until the mid-Miocene
Miocene
The Miocene is a geological epoch of the Neogene Period and extends from about . The Miocene was named by Sir Charles Lyell. Its name comes from the Greek words and and means "less recent" because it has 18% fewer modern sea invertebrates than the Pliocene. The Miocene follows the Oligocene...
, some 15 mya.

It is not clear where the Marmotini originated. The subtribes probably diverged in the early to mid-Oligocene
Oligocene
The Oligocene is a geologic epoch of the Paleogene Period and extends from about 34 million to 23 million years before the present . As with other older geologic periods, the rock beds that define the period are well identified but the exact dates of the start and end of the period are slightly...
, as primitive marmots and chipmunks are known from the Late Oligocene of North America
North America
North America is a continent wholly within the Northern Hemisphere and almost wholly within the Western Hemisphere. It is also considered a northern subcontinent of the Americas...
. Unfortunately, the fossil record of the "true" ground squirrels is less well known, beginning only in the mid-Miocene when modern susliks and prairie dogs are known to have inhabited their present-day range already.

Whether the Marmotini dispersed between North America and Eurasia via "island-hopping" across the Bering Straits or the Greenland
Greenland
Greenland is an autonomous country within the Kingdom of Denmark, located between the Arctic and Atlantic Oceans, east of the Canadian Arctic Archipelago. Though physiographically a part of the continent of North America, Greenland has been politically and culturally associated with Europe for...
region—which both at that time were temperate habitat
Habitat
* Habitat , a place where a species lives and grows*Human habitat, a place where humans live, work or play** Space habitat, a space station intended as a permanent settlement...
—and from which continent they dispersed to which, or if both continents brought forth distinct subtribes which then spread to the other, is not known and would probably require more fossil material to be resolved. In any case, that the fairly comprehensive fossil record of Europe—at the relevant time separated from Asia by the Turgai Sea
Turgai Sea
The Turgai Sea or Turgai Strait, also known as the West Siberian Sea, was a large shallow body of salt water of the Mesozoic and Cenozoic Eras...
—lacks ancient Marmotini except the indeterminate Palaeosciurus might be taken to indicate that an East Asian or western North American origin with trans-Beringia dispersal is the slightly more satisfying hypothesis. This is also supported by the enigmatic Chinese genus Sciurotamias
Sciurotamias
Sciurotamias is a genus of rodent in the Sciuridae family, found in China.It contains the following species:* Pére David's Rock Squirrel * Forrest's Rock Squirrel...
, which may be the most ancient living lineage of this group, or—if the chipmunks are not included here—close to the common ancestor of the Tamiini and the Marmotini sensu stricto.

In any case, expansion of the Marmotini to Africa
Africa
Africa is the world's second largest and second most populous continent, after Asia. At about 30.2 million km² including adjacent islands, it covers 6% of the Earth's total surface area and 20.4% of the total land area...
was probably prevented by competitive exclusion by their close relatives the Protoxerini
Protoxerini
Protoxerini is a tribe of squirrels found in Africa. There are thirty species in six genera.-Genera:Epixerus Funisciurus Heliosciurus Myosciurus Paraxerus...
and Xerini—the native terrestrial and palm squirrels of that continent—which must have evolved at the same time as the Marmotini did.

Basal and incertae sedis
Incertae sedis
, is a term used to define a taxonomic group where its broader relationships are unknown or undefined. Uncertainty at specific taxonomic levels is attributed by , , and similar terms.-Examples:*The fossil plant Paradinandra suecica could not be assigned to any...
genera
Subtribe Tamiina: chipmunks (might be full tribe)
Subtribe Marmotina: marmots
Subtribe Spermophilina: true ground squirrels