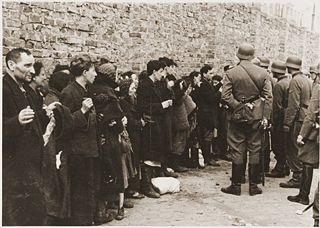 The turning point in the life of the Ghetto was April 18, 1942, marked by a new wave of mass executions by the SS
Schutzstaffel
The Schutzstaffel |Sig runes]]) was a major paramilitary organization under Adolf Hitler and the Nazi Party. Built upon the Nazi ideology, the SS under Heinrich Himmler's command was responsible for many of the crimes against humanity during World War II...
.


"Until that day, no matter how difficult life had been, the ghetto inhabitants felt that their everyday life, the very foundations of their existence, were based on something stabilized and durable... On April 18th the very basis of ghetto life started to move from under people's feet... By now everybody understood that the ghetto was to be liquidated, but nobody yet realized that its entire population was destined to die." — Marek Edelman
Marek Edelman
Marek Edelman was a Jewish-Polish political and social activist and cardiologist.Before World War II, he was a General Jewish Labour Bund activist. During the war he co-founded the Jewish Combat Organization. He took part in the 1943 Warsaw Ghetto Uprising, becoming its leader after the death of...

On July 22, 1942, the German SS headed by the "Resettlement Commissioner", SS-Sturmbannführer Hermann Höfle
Hermann Höfle
Hermann Julius "Hans" Höfle was an Austrian-born SS-Sturmbannführer . He was deputy to Odilo Globocnik in the Aktion Reinhard program, serving as his main deportation and extermination expert...
called a meeting of the Ghetto Jewish Council Judenrat
Judenrat
Judenräte were administrative bodies during the Second World War that the Germans required Jews to form in the German occupied territory of Poland, and later in the occupied territories of the Soviet Union It is the overall term for the enforcement bodies established by the Nazi occupiers to...
and informed its leader Adam Czerniaków
Adam Czerniaków
Adam Czerniaków , born in Warsaw, Poland, was a Polish-Jewish engineer and senator to the prewar Polish Sejm for Nonpartisan Bloc for Cooperation with the Government...
about the "resettlement to the East". Czerniakow – whose voice carried a great deal of authority – committed suicide the moment he realised the treacherous Nazi plan. He was promptly replaced by Marc Lichtenbaum. The population of the Ghetto was not informed about the real state of affairs; only by the end of 1942 did it became clear that the deportations, overseen by the Jewish Ghetto Police designated to supervise them, were to the Treblinka
Treblinka extermination camp
Treblinka was a Nazi extermination camp in occupied Poland during World War II near the village of Treblinka in the modern-day Masovian Voivodeship of Poland. The camp, which was constructed as part of Operation Reinhard, operated between and ,. During this time, approximately 850,000 men, women...
death camp and not for the purpose of resettlement
World War II evacuation and expulsion
Forced deportation, mass evacuation and displacement of peoples took place in many of the countries involved in World War II. These were caused both by the direct hostilities between Axis and Allied powers, and the border changes enacted in the pre-war settlement...
.

During the two months of summer 1942, about 254,000 Ghetto residents were sent to Treblinka and exterminated there (or at least 300,000 by different accounts, possibly, with the inclusion of the Ghetto falling considered by many a part of the operation). The sheer death-toll among the Jewish inhabitants of the Ghetto during the Gross-aktion would have been difficult to compare even with the liquidation of the Ghetto in spring of next year during and after the Ghetto Uprising
Warsaw Ghetto Uprising
The Warsaw Ghetto Uprising was the Jewish resistance that arose within the Warsaw Ghetto in German occupied Poland during World War II, and which opposed Nazi Germany's effort to transport the remaining ghetto population to Treblinka extermination camp....
which meant annihilation of around 50,000 people. The Gross Aktion resulted in the death of five times as many victims. It is fair to assume then, that it was not the actual razing of the ghetto that resulted in the destruction of the Jewish population of Warsaw, but mainly the murderous operation of a previous summer that did it.

For eight weeks the rail shipments of Jews to Treblinka went on without stopping: 100 people to a cattle truck, 5,000 to 6,000 each and every day including hospital patients and orphanage children. Dr Janusz Korczak
Janusz Korczak
Janusz Korczak, the pen name of Henryk Goldszmit was a Polish-Jewish children's author, and pediatrician known as Pan Doktor or Stary Doktor...
, a famed educator went with them in August 1942. He was offered a chance to escape from the deportations by Polish friends and admirers, but he chose instead to share the fate of his life's work. On arrival at Treblinka, stripped victims were marched to one of ten chambers disguised as showers, and suffocated to death in batches of 200 with the use of monoxide gas (Zyklon B
Zyklon B
Zyklon B was the trade name of a cyanide-based pesticide infamous for its use by Nazi Germany to kill human beings in gas chambers of extermination camps during the Holocaust. The "B" designation indicates one of two types of Zyklon...
was introduced at Auschwitz some time later). In September 1942, new gas chambers were built, which could kill as many as 3,000 people in just 2 hours. Civilians were forbidden to approach the area.

The tragic end of the Ghetto could not have been changed, but the road to it might have been different under a stronger leader. There can be no doubt that if the Uprising of the Warsaw Ghetto had taken place in August—September 1942, when there were still 300,000 Jews, the Germans would have paid a much higher price. — David J. Landau

Many of the remaining Jews decided to fight, and many of them were helped by the Polish underground. The Jewish Combat Organization (ŻOB) was formed in October 1942 and tasked with resisting any future deportations. It was led by 24 year–old Mordechai Anielewicz. Meanwhile, the Polish Home Army, Armia Krajowa, began to smuggle weapons, ammunition and supplies into the Ghetto for the uprising
Warsaw Ghetto Uprising
The Warsaw Ghetto Uprising was the Jewish resistance that arose within the Warsaw Ghetto in German occupied Poland during World War II, and which opposed Nazi Germany's effort to transport the remaining ghetto population to Treblinka extermination camp....
.

Ferdinand von Sammern-Frankenegg was court-martialed by Himmler on April 24, 1943 for his ineptitude, and sent to Croatia where he died in a partisan ambush. Jürgen Stroop was awarded the Iron Cross
Iron Cross
The Iron Cross is a cross symbol typically in black with a white or silver outline that originated after 1219 when the Kingdom of Jerusalem granted the Teutonic Order the right to combine the Teutonic Black Cross placed above a silver Cross of Jerusalem....
First Class by the supreme commander of the Wehrmacht
Wehrmacht
The Wehrmacht – from , to defend and , the might/power) were the unified armed forces of Nazi Germany from 1935 to 1945. It consisted of the Heer , the Kriegsmarine and the Luftwaffe .-Origin and use of the term:...
, Field Marshal General Wilhelm Keitel
Wilhelm Keitel
Wilhelm Bodewin Gustav Keitel was a German field marshal . As head of the Oberkommando der Wehrmacht and de facto war minister, he was one of Germany's most senior military leaders during World War II...
for his "murder expedition" (Alfred Jodl
Alfred Jodl
Alfred Josef Ferdinand Jodl was a German military commander, attaining the position of Chief of the Operations Staff of the Armed Forces High Command during World War II, acting as deputy to Wilhelm Keitel...
) and after the war, was placed on trial by the Americans and sentenced to death. His execution was not carried out; instead, he was handed over to the Polish authorities for re-trial. He was again sentenced to death in Poland
Poland
Poland , officially the Republic of Poland , is a country in Central Europe bordered by Germany to the west; the Czech Republic and Slovakia to the south; Ukraine, Belarus and Lithuania to the east; and the Baltic Sea and Kaliningrad Oblast, a Russian exclave, to the north...
and executed on the scene of his crime on September 8, 1951.