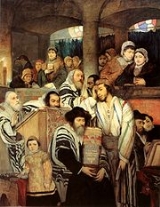 Overview
Yom Kippur also known as Day of Atonement, is the holiest and most solemn day of the year for the Jews
Jews
The Jews , also known as the Jewish people, are a nation and ethnoreligious group originating in the Israelites or Hebrews of the Ancient Near East. The Jewish ethnicity, nationality, and religion are strongly interrelated, as Judaism is the traditional faith of the Jewish nation...
. Its central themes are atonement
Atonement in Judaism
Atonement in Judaism is the process of causing a transgression to be forgiven or pardoned.- In Rabbinic Judaism :In Rabbinic Judaism, atonement is achieved through some combination of*repentance*Temple service Atonement in Judaism is the process of causing a transgression to be forgiven or...
and repentance
Repentance in Judaism
Repentance in Judaism known as teshuva , is the way of atoning for sin in Judaism.According to Gates of Repentance, a standard work of Jewish ethics written by Rabbenu Yonah of Gerona, if someone commits a sin, a forbidden act, he can be forgiven for that sin if he performs teshuva, which...
. Jews traditionally observe this holy day with a 25-hour period of fasting
Ta'anit
A ta'anit or taanis or taʿanith in Classical Hebrew is a fast in Judaism in which one abstains from all food and drink, including water...
and intensive prayer
Jewish services
Jewish prayer are the prayer recitations that form part of the observance of Judaism. These prayers, often with instructions and commentary, are found in the siddur, the traditional Jewish prayer book....
, often spending most of the day in synagogue
Synagogue
A synagogue is a Jewish house of prayer. This use of the Greek term synagogue originates in the Septuagint where it sometimes translates the Hebrew word for assembly, kahal...
services. Yom Kippur completes the annual period known in Judaism
Judaism
Judaism ) is the "religion, philosophy, and way of life" of the Jewish people...
as the High Holy Days
High Holy Days
The High Holidays or High Holy Days, in Judaism, more properly known as the Yamim Noraim , may mean:#strictly, the holidays of Rosh Hashanah and Yom Kippur ;...
or Yamim Nora'im ("Days of Awe").

What would be appropriate greetings, such as "HAPPY HOLIDAYS", or something, to send for Yom Kipur?
More
x