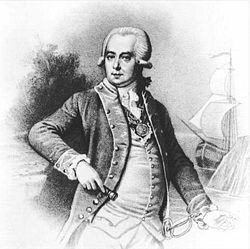 Grigory Ivanovich Shelekhov (Григорий Иванович Шелехов in Russian
Russian language
Russian is a Slavic language used primarily in Russia, Belarus, Uzbekistan, Kazakhstan, Tajikistan and Kyrgyzstan. It is an unofficial but widely spoken language in Ukraine, Moldova, Latvia, Turkmenistan and Estonia and, to a lesser extent, the other countries that were once constituent republics...
; (1747–July 20, 1795 (July 31, 1795 N.S.)) was a Russia
Russia
Russia or , officially known as both Russia and the Russian Federation , is a country in northern Eurasia. It is a federal semi-presidential republic, comprising 83 federal subjects...
n seafarer and merchant
Merchant
A merchant is a businessperson who trades in commodities that were produced by others, in order to earn a profit.Merchants can be one of two types:# A wholesale merchant operates in the chain between producer and retail merchant...
born in Rylsk
Rylsk
Rylsk is a town and the administrative center of Rylsky District of Kursk Oblast, Russia, located on the right bank of the Seym River southwest of Kursk. Population: 19,000 .-History:...
.

Shelekhov organized commercial trips of the merchant ships to the Kuril Islands
Kuril Islands
The Kuril Islands , in Russia's Sakhalin Oblast region, form a volcanic archipelago that stretches approximately northeast from Hokkaidō, Japan, to Kamchatka, Russia, separating the Sea of Okhotsk from the North Pacific Ocean. There are 56 islands and many more minor rocks. It consists of Greater...
and the Aleutian Islands starting from 1775. In 1783–1786, he led an expedition to the shores of Russian America, during which they founded the first permanent Russian settlements in North America
North America
North America is a continent wholly within the Northern Hemisphere and almost wholly within the Western Hemisphere. It is also considered a northern subcontinent of the Americas...
. Shelekhov's voyage was done under the auspices of the so-called Shelekhov-Golikov company, the other owner of which was Ivan Larionovich Golikov. This company would later form the basis on which the Russian-American Company
Russian-American Company
The Russian-American Company was a state-sponsored chartered company formed largely on the basis of the so-called Shelekhov-Golikov Company of Grigory Shelekhov and Ivan Larionovich Golikov The Russian-American Company (officially: Under His Imperial Majesty's Highest Protection (patronage)...
was founded 1799.

In 1784, Shelekhov arrived in Three Saints Bay on Kodiak Island
Kodiak Island
Kodiak Island is a large island on the south coast of the U.S. state of Alaska, separated from the Alaska mainland by the Shelikof Strait. The largest island in the Kodiak Archipelago, Kodiak Island is the second largest island in the United States and the 80th largest island in the world, with an...
with two ships, the Three Hierarchs, Basil the Great, Gregory the Theologian and John Chrysostom and the St. Simon. The indigenous Koniaga, an Alutiiq
Alutiiq
The Alutiiq , also called Pacific Yupik or Sugpiaq, are a southern coastal people of the Native peoples of Alaska. Their language is called Sugstun, and it is one of Eskimo languages, belonging to the Yup’ik branch of these languages. They are not to be confused with the Aleuts, who live further...
nation of Alaska Natives
Alaska Natives
Alaska Natives are the indigenous peoples of Alaska. They include: Aleut, Inuit, Tlingit, Haida, Tsimshian, Eyak, and a number of Northern Athabaskan cultures.-History:In 1912 the Alaska Native Brotherhood was founded...
, harassed the Russian party and Shelekhov responded by killing hundreds and taking hostages to enforce the obedience of the rest. Having established his authority on Kodiak Island, Shelekhov founded the first permanent Russian settlement in Alaska on the island's Three Saints Bay (Unalaska had existed long before, but it was never considered the permanent base for Russians until Shelekhov’s time).

In 1790, Shelekhov, back in Russia, hired Alexandr Baranov to manage his fur enterprise in Russian America. 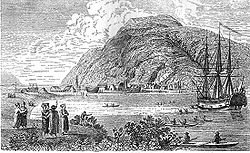 A gulf in the Sea of Okhotsk
Sea of Okhotsk
The Sea of Okhotsk is a marginal sea of the western Pacific Ocean, lying between the Kamchatka Peninsula on the east, the Kuril Islands on the southeast, the island of Hokkaidō to the far south, the island of Sakhalin along the west, and a long stretch of eastern Siberian coast along the west and...
, a strait between Alaska
Alaska
Alaska is the largest state in the United States by area. It is situated in the northwest extremity of the North American continent, with Canada to the east, the Arctic Ocean to the north, and the Pacific Ocean to the west and south, with Russia further west across the Bering Strait...
and Kodiak Island
Kodiak Island
Kodiak Island is a large island on the south coast of the U.S. state of Alaska, separated from the Alaska mainland by the Shelikof Strait. The largest island in the Kodiak Archipelago, Kodiak Island is the second largest island in the United States and the 80th largest island in the world, with an...
, and a town
Shelekhov
Shelekhov is a town in Irkutsk Oblast, Russia, located southwest of Irkutsk. Population: It was founded in the early 1950s due to the construction of an aluminum plant. In 1956, it was named Shelekhov after a Russian explorer Grigory Shelekhov. For some reason, the authorities used the incorrect ...
in Irkutsk Oblast
Irkutsk Oblast
Irkutsk Oblast is a federal subject of Russia , located in southeastern Siberia in the basins of Angara River, Lena, and Nizhnyaya Tunguska Rivers. The administrative center is the city of Irkutsk. Population: -History:...
in Russia
Russia
Russia or , officially known as both Russia and the Russian Federation , is a country in northern Eurasia. It is a federal semi-presidential republic, comprising 83 federal subjects...
bear Shelekhov's name. Shelekhov actually travelled via Shelekhov Bay in the Sea of Okhotsk in December 1786-January 1787, after he had been left behind at Bol’shereck in Kamchatka as the winds tore the Three Hierarcs from her anchors and carried her out to sea. There is a statue of Shelekhov in his native Rylsk.
The source of this article is wikipedia, the free encyclopedia.  The text of this article is licensed under the GFDL.