The Alutiiq also called Pacific Yupik or Sugpiaq, are a southern coastal people of the Native peoples of Alaska
Alaska
Alaska is the largest state in the United States by area. It is situated in the northwest extremity of the North American continent, with Canada to the east, the Arctic Ocean to the north, and the Pacific Ocean to the west and south, with Russia further west across the Bering Strait...
. Their language is called Sugstun
Alutiiq language
The Alutiiq language is a close relative to the Central Alaskan Yup'ik language spoken in the western and southwestern Alaska, but is considered a distinct language...
, and it is one of Eskimo languages, belonging to the Yup’ik branch of these languages. They are not to be confused with the Aleuts, who live further to the southwest, including along the Aleutian Islands. 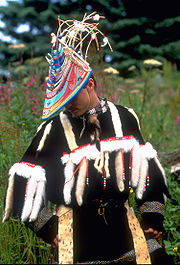