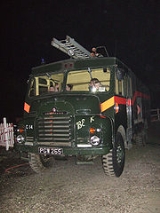 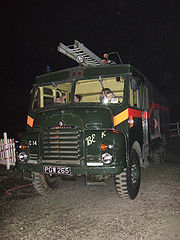 The Green Goddess is the colloquial name for the Bedford
Bedford Vehicles
Bedford Vehicles, usually shortened to just Bedford, was a subsidiary of Vauxhall Motors, itself the British subsidiary of General Motors , established in 1930; and constructing commercial vehicles. Bedford Vehicles was a leading international truck manufacturer, with substantial export sales of...
RLHZ Self Propelled Pump, a fire engine
Fire apparatus
A fire apparatus, fire engine, fire truck, or fire appliance is a vehicle designed to assist in fighting fires by transporting firefighters to the scene and providing them with access to the fire, along with water or other equipment...
used originally by the Auxiliary Fire Service
Auxiliary Fire Service
The Auxiliary Fire Service was first formed in 1938 in Great Britain as part of Civil Defence Air raid precautions. Its role was to supplement the work of brigades at local level. In this job it was hampered severely by the incompatibility of equipment used by these different brigades - most...
(AFS), and latterly by the British Armed Forces
British Armed Forces
The British Armed Forces are the armed forces of the United Kingdom of Great Britain and Northern Ireland.Also known as Her Majesty's Armed Forces and sometimes legally the Armed Forces of the Crown, the British Armed Forces encompasses three professional uniformed services, the Royal Navy, the...
. These green-painted vehicles were built between 1953 and 1956 for the Auxiliary Fire Service. The design was based on a Bedford RL
Bedford RL
The Bedford RL was the British Military's main medium lorry , built by Bedford Vehicles, from the mid 1950s until the late 1960s.- History :...
series British military truck.

The Auxiliary Fire Service
Auxiliary Fire Service
The Auxiliary Fire Service was first formed in 1938 in Great Britain as part of Civil Defence Air raid precautions. Its role was to supplement the work of brigades at local level. In this job it was hampered severely by the incompatibility of equipment used by these different brigades - most...
was established as part of civil defence preparations after the Second World War
World War II
World War II, or the Second World War , was a global conflict lasting from 1939 to 1945, involving most of the world's nations—including all of the great powers—eventually forming two opposing military alliances: the Allies and the Axis...
, and subsequent events such as the Soviet Union
Soviet Union
The Soviet Union , officially the Union of Soviet Socialist Republics , was a constitutionally socialist state that existed in Eurasia between 1922 and 1991....
detonating an atomic bomb made their presence as part of Britain's Civil Defence an important role supporting civilians. It was thought that a nuclear attack on Britain
United Kingdom
The United Kingdom of Great Britain and Northern IrelandIn the United Kingdom and Dependencies, other languages have been officially recognised as legitimate autochthonous languages under the European Charter for Regional or Minority Languages...
would cause a large number of fires, which would overwhelm the ordinary fire service, so a large stock of basic fire engines was ordered to form a reserve capacity. They were in continuous use by the AFS, until disbandment in 1968 by the Harold Wilson
Harold Wilson
James Harold Wilson, Baron Wilson of Rievaulx, KG, OBE, FRS, FSS, PC was a British Labour Member of Parliament, Leader of the Labour Party. He was twice Prime Minister of the United Kingdom during the 1960s and 1970s, winning four general elections, including a minority government after the...
Government.

The Green Goddess machines were not primarily fire engines (AFS members referred to them as 'appliances'); they are more correctly titled "self propelled pumps", some two-wheel drive
Two-wheel drive
Two wheel drive or 2WD describes vehicles with a drivetrain that allows two wheels to receive power from the engine simultaneously.-Four wheeled vehicles:...
(2x4), and others in four-wheel drive
Four-wheel drive
Four-wheel drive, 4WD, or 4×4 is a four-wheeled vehicle with a drivetrain that allows all four wheels to receive torque from the engine simultaneously...
(4x4) form. Their main role was to pump huge quantities of water, from lakes, rivers, canals and other sources, into cities hit by a nuclear attack. The machines could be used in a relay system over a number of miles, with Green Goddesses at regular intervals to boost the water pressure. Fire fighting was a secondary role. 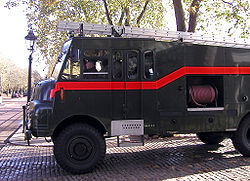 Prior to disbandment, the AFS used the 'Green Goddess' extensively in support of the local Fire Services throughout the UK. They provided additional water delivery and fire fighting capability at times when the regular Fire Brigades had a major incident to contain. The ability to relay large quantities of water over considerable distances was invaluable in some more remote locations, or where the incident required more water than local water systems could provide. Most UK Boroughs had an Auxiliary Fire Service detachment housed alongside the regular Brigade equipments.

After 1968, the vehicles were mothballed, but occasionally used by the Armed Forces to provide fire cover in a number of fire strikes, notably in 1977 and 2002 (see UK firefighter dispute 2002-2003). They were also deployed to pump water in floods and droughts. They were well maintained in store, and regularly road tested. There was a less significant strike by firefighters in the Winter of Discontent
Winter of Discontent
The "Winter of Discontent" is an expression, popularised by the British media, referring to the winter of 1978–79 in the United Kingdom, during which there were widespread strikes by local authority trade unions demanding larger pay rises for their members, because the Labour government of...
(late 1978 and early 1979), where once again the Green Goddesses were drafted in to cover; it is largely forgotten by many as it occurred at a time when a significant percentage of public sector workers were on strike.

In March 2004, the Government announced that it was conducting a test sale of 40 of its remaining fleet of more than 900 vehicles, and that it was planning to dispose of the remainder. The sale of the fleet has been completed, and most of the vehicles have been sold on to fire brigades in developing countries, mostly in Africa.

Unlike modern engines they have no radio, no cutting equipment, only a single ladder
Ladder
A ladder is a vertical or inclined set of rungs or steps. There are two types: rigid ladders that can be leaned against a vertical surface such as a wall, and rope ladders that are hung from the top. The vertical members of a rigid ladder are called stringers or stiles . Rigid ladders are usually...
, and were relatively slow with a maximum speed of around 65 mi/h, a comfortable cruising speed of 45 mi/h, no power steering, and sensitive on corners. But one advantage that some Green Goddesses enjoy over most modern fire appliances is their four-wheel drive. Fuel consumption was between 8 mpgimp and 10 mpgimp, depending on driving style and quantity water carried. They also have less water capacity at 400 gallons (1,818.4 l) in 4x2 form, 300 gallons (1,363.8 l) on 4x4 versions, than a modern vehicle, and poorer stability due to a lack of baffle partitions in the water tank. The vehicle cabins were made of wood, and offer very little crew protection in the event of an accident.

Some were later modified by the installation of flashing blue lamps and two tone warning sirens, and alterations to the rear lamps, to bring them into line with then current practice on 'regular' emergency appliances. Mechanically, they were designed to be robust and easy to maintain.

The Green Goddess carried a range of equipment from standard hose and branches, through a selection of nozzles to provide different flows and jet patterns, to Light Portable Pumps and Ceiling Arresters. They all carried a 33.5 feet (10.2 m) extension ladder
Ladder
A ladder is a vertical or inclined set of rungs or steps. There are two types: rigid ladders that can be leaned against a vertical surface such as a wall, and rope ladders that are hung from the top. The vertical members of a rigid ladder are called stringers or stiles . Rigid ladders are usually...
, together with at least one scaling ladder. Some carried additional equipment, such as Hook ladder
Hook ladder
The hook ladder was once a very important tool of the fire department as firefighters could theoretically reach every floor of a building with it. It consists of a simple 2.5-metre ladder with a long, flat hook on its top, with serrations on the underside which gripped the sill...
s, radios, large bolt cutters, etc.

The Sigmund F.N.5 main pump has a capacity of 1000 gallons (4,546.1 l) per minute (900 gallons (4,091.5 l) on 4x4 versions). Normal fire hoses could be used either from the main pump, which had four outlets, or from normal fire hydrants for which an assortment of connecting branches were carried. In addition, the machines carried a small Coventry Climax
Coventry Climax
Coventry Climax was a British forklift truck, fire pump, and speciality engine manufacturer.-History:The company was started in 1903 as Lee Stroyer, but two years later, following the departure of Stroyer, it was relocated to Paynes Lane, Coventry, and renamed to Coventry-Simplex by H...
(350 gallons (1,591.1 l) per minute pump, with its own petrol engine
Petrol engine
A petrol engine is an internal combustion engine with spark-ignition, designed to run on petrol and similar volatile fuels....
, which could also draw water from a river or other source, again feeding normal fire hoses, and which provided a separate and self-contained fire fighting capability. A 400 gallon water tank (300 gallons on 4x4) was installed, which fed small diameter hoses on each side of the vehicle to give an immediate "first aid" capacity to fight a fire whilst the main hoses were connected and brought into use. A stirrup pump was also carried, together with a full range of other suitable tools and equipment.

The vehicles were normally crewed by an officer in charge, who sat in the front passenger seat, a driver/pump operator, and four fire fighters seated on the crew bench.