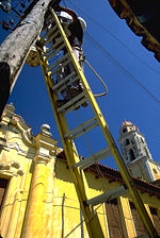 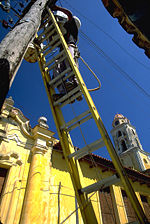 A ladder is a vertical
Vertical direction
In astronomy, geography, geometry and related sciences and contexts, a direction passing by a given point is said to be vertical if it is locally aligned with the gradient of the gravity field, i.e., with the direction of the gravitational force at that point...
or inclined set of rungs or steps. There are two types: rigid ladders that can be leaned against a vertical surface such as a wall
Wall
A wall is a usually solid structure that defines and sometimes protects an area. Most commonly, a wall delineates a building and supports its superstructure, separates space in buildings into rooms, or protects or delineates a space in the open air...
, and rope
Rope
A rope is a length of fibres, twisted or braided together to improve strength for pulling and connecting. It has tensile strength but is too flexible to provide compressive strength...
ladders that are hung from the top. The vertical members of a rigid ladder are called stringers (US) or stiles (UK). Rigid ladders are usually portable
Portability
Portability may refer to:*Portability , the portability of social security benefits*Software portability, the portability of a piece of software to multiple platforms...
, but some types are permanently fixed to buildings. They are commonly made of metal, wood, or fibreglass, but they have been known to be made of tough plastic.

Rigid ladders are available in many forms, such as:

Rigid ladders were originally made of wood
Wood
Wood is a hard, fibrous tissue found in many trees. It has been used for hundreds of thousands of years for both fuel and as a construction material. It is an organic material, a natural composite of cellulose fibers embedded in a matrix of lignin which resists compression...
,but in the 20th century tubular aluminium
Aluminium
Aluminium or aluminum is a silvery white member of the boron group of chemical elements. It has the symbol Al, and its atomic number is 13. It is not soluble in water under normal circumstances....
became more common because of its lighter weight. Ladders with fibreglass
Glass-reinforced plastic
Fiberglass , is a fiber reinforced polymer made of a plastic matrix reinforced by fine fibers of glass. It is also known as GFK ....
stiles are used for working on or near overhead electrical wires, because fibreglass is an electrical insulator
Electrical insulation
thumb|250px|[[Coaxial Cable]] with dielectric insulator supporting a central coreThis article refers to electrical insulation. For insulation of heat, see Thermal insulation...
.

For safety, a rigid ladder should be leaned at an angle of about fifteen degrees to the vertical. In other words, the distance from the foot of the ladder to the wall should be about one quarter of the height of the top of the ladder. At steeper angles, the ladder is at risk of toppling backwards when the climber leans away from it. At shallower angles, the ladder may lose its grip on the ground. Ladder stabilizers are available that increase the ladder's grip on the ground. One of the first ladder stabilizers or ladder feet was offered in 1936 and today they are standard equipment on most large ladders.

A ladder standoff, or stay, is a device fitted to the top of a ladder to hold it away from the wall. This enables the ladder to clear overhanging obstacles, such as the eaves of a roof
Roof
A roof is the covering on the uppermost part of a building. A roof protects the building and its contents from the effects of weather. Structures that require roofs range from a letter box to a cathedral or stadium, dwellings being the most numerous....
, and increases the safe working height for a given length of ladder.

Ladders are ancient tools and technology. A ladder is depicted in a Mesolithic
Mesolithic
The Mesolithic is an archaeological concept used to refer to certain groups of archaeological cultures defined as falling between the Paleolithic and the Neolithic....
rock painting that is at least 10,000 years old, depicted in the Spider Caves
Cuevas de la Araña en Bicorp
The Cuevas de la Araña are a group of caves in the municipality of Bicorp in Valencia, eastern Spain. The caves are in the valley of the river Escalona and were used by prehistoric people who left rock art...
in Valencia, Spain. references the rock painting which shows two naked humans carrying baskets or bags that are employing a long wobbly ladder, which appears to be made out of some kind of grass, to reach a wild honeybee nest to harvest honey
Honey
Honey is a sweet food made by bees using nectar from flowers. The variety produced by honey bees is the one most commonly referred to and is the type of honey collected by beekeepers and consumed by humans...
. Modern ladders are believed to have been conceived by Hebrews and Egyptians.

It is commonly said that walking under a ladder is bad luck. This is believed to have started in the Medieval times. It was believed that a leaning ladder resembled the gallows, so to walk under it would ensure a death by hanging. Another belief is that the leaning ladder resembles a triangle, or the Holy Trinity. Thus, by walking through it, one would be violating God. Yet another explanation comes from ancient Egyptians who believed that the triangle was a magical shape, because that was the shape of the pyramids. As such walking under it would break the shape.
A more natural explanation would be that an erected ladder most likely meant that someone was working above and to pass under it would make a person susceptible to injuries due to falling objects.