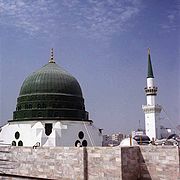 The Green Dome refers to the green coloured dome
Dome
A dome is a structural element of architecture that resembles the hollow upper half of a sphere. Dome structures made of various materials have a long architectural lineage extending into prehistory....
built above the tomb of the Islamic prophet
Prophets of Islam
Muslims identify the Prophets of Islam as those humans chosen by God and given revelation to deliver to mankind. Muslims believe that every prophet was given a belief to worship God and their respective followers believed it as well...
, Muhammad
Muhammad
Muhammad |ligature]] at U+FDF4 ;Arabic pronunciation varies regionally; the first vowel ranges from ~~; the second and the last vowel: ~~~. There are dialects which have no stress. In Egypt, it is pronounced not in religious contexts...
, Caliph
Caliph
The Caliph is the head of state in a Caliphate, and the title for the ruler of the Islamic Ummah, an Islamic community ruled by the Shari'ah. It is a transcribed version of the Arabic word   which means "successor" or "representative"...
Abu Bakr
Abu Bakr
Abu Bakr was a senior companion and the father-in-law of the Islamic prophet Muhammad. He ruled over the Rashidun Caliphate from 632-634 CE when he became the first Muslim Caliph following Muhammad's death...
and Umar
Umar
`Umar ibn al-Khattāb c. 2 November , was a leading companion and adviser to the Islamic prophet Muhammad who later became the second Muslim Caliph after Muhammad's death....
in the Al-Masjid al-Nabawi
Al-Masjid al-Nabawi
Al-Masjid al-Nabawi , often called the Prophet's Mosque, is a mosque situated in the city of Medina. As the final resting place of the Islamic prophet Muhammad, it is considered the second holiest site in Islam by Muslims and is one of the largest mosques in the world...
(Mosque
Mosque
A mosque is a place of worship for followers of Islam. The word is likely to have entered the English language through French , from Portuguese , from Spanish , and from Berber , ultimately originating in — . The Arabic word masjid literally means a place of prostration...
of the Prophet) in Medina
Medina
Medina , or ; also transliterated as Madinah, or madinat al-nabi "the city of the prophet") is a city in the Hejaz region of western Saudi Arabia, and serves as the capital of the Al Madinah Province. It is the second holiest city in Islam, and the burial place of the Islamic Prophet Muhammad, and...
, Saudi Arabia
Saudi Arabia
The Kingdom of Saudi Arabia , commonly known in British English as Saudi Arabia and in Arabic as as-Sa‘ūdiyyah , is the largest state in Western Asia by land area, constituting the bulk of the Arabian Peninsula, and the second-largest in the Arab World...
. In 2007, the grand mufti of Saudi Arabia, stated that "the green dome shall be demolished and the three graves flattened in the Prophet's Masjid". 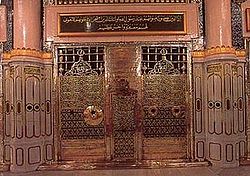 The dome over the grave of the Muhammad dates back to the reign of Sultan Qala'un or Al Mansur Qalawun. The original structure was built of wood and was colourless before being painted white and blue after every restoration taken place by new rulers. After a serious fire struck the Mosque of the Prophet in Medina in 1481, the mosque and dome had been burnt and a restoration project was initiated by Sultan Qaitbay
Qaitbay
Al-Ashraf Sayf al-Din Qa'it Bay was the eighteenth Burji Mamluk Sultan of Egypt from 872-901 A.H. . He was Circassian by birth, and was purchased by the ninth sultan Barsbay before being freed by the eleventh sultan Jaqmaq...
who had most of the wooden base replaced by a brick structure in order to prevent the collapse of the dome in the future, in case of another disaster and used plates of lead to cover the new wooden dome, the building, including the Tomb of the Prophet, was extensively renewed through Qaitbay's patronage

Muhammad's grave lies within the confines of what used to be his wife Aisha
Aisha
Aisha bint Abu Bakr also transcribed as was Muhammad's favorite wife...
's and his house. During his lifetime it was adjoining the mosque. The mosque was expanded during the reign of Caliph al-Walid I to include his tomb. The prophet's grave is an important reason for the particularly high sanctity of the mosque. Millions of visitors come to visit it every year because it is tradition to visit mosque when going on the pilgrimage
Hajj
The Hajj is the pilgrimage to Mecca, Saudi Arabia. It is one of the largest pilgrimages in the world, and is the fifth pillar of Islam, a religious duty that must be carried out at least once in their lifetime by every able-bodied Muslim who can afford to do so...
to Mecca
Mecca
Mecca is a city in the Hijaz and the capital of Makkah province in Saudi Arabia. The city is located inland from Jeddah in a narrow valley at a height of above sea level...
.

Muhammad is buried next to the first two caliphs
Caliphate
The term caliphate, "dominion of a caliph " , refers to the first system of government established in Islam and represented the political unity of the Muslim Ummah...
, Abu Bakr and Umar. Umar was gifted a spot next to Muhammad by his wife Ayesha, which had originally been intended for her. There is an empty grave within the tomb area meant for Jesus upon his return as the Messiah
Messiah
A messiah is a redeemer figure expected or foretold in one form or another by a religion. Slightly more widely, a messiah is any redeemer figure. Messianic beliefs or theories generally relate to eschatological improvement of the state of humanity or the world, in other words the World to...
.

Muhammad's grave itself cannot be seen as the area is cordoned off by a gold mesh and black curtains. As per Wahhabi tradition, the grave itself is not embellished or decorated and is two cubits high. The grave is marked by an austere green wooden dome above it, built by the Ottoman Turks
Ottoman Turks
The Ottoman Turks were the Turkish-speaking population of the Ottoman Empire who formed the base of the state's military and ruling classes. Reliable information about the early history of Ottoman Turks is scarce, but they take their Turkish name, Osmanlı , from the house of Osman I The Ottoman...
. This dome has become universally emblematic of both the Muhammad himself, as well as his beloved city of Medina.