Encyclopedia
Grand admiral is a historic naval
Navy
A navy is the branch of a nation's armed forces principally designated for naval and amphibious warfare; namely, lake- or ocean-borne combat operations and related functions...
rank
Military rank
Military rank is a system of hierarchical relationships in armed forces or civil institutions organized along military lines. Usually, uniforms denote the bearer's rank by particular insignia affixed to the uniforms...
, generally being the highest such rank present in any particular country. Its most notable use was in Germany — the German
German language
German is a West Germanic language, related to and classified alongside English and Dutch. With an estimated 90 – 98 million native speakers, German is one of the world's major languages and is the most widely-spoken first language in the European Union....
word is Großadmiral.

In Bourbon Restoration
Bourbon Restoration
The Bourbon Restoration is the name given to the period following the successive events of the French Revolution , the end of the First Republic , and then the forcible end of the First French Empire under Napoleon  – when a coalition of European powers restored by arms the monarchy to the...
France, the rank was an honorific one equivalent to that of marshal
Marshal of France
The Marshal of France is a military distinction in contemporary France, not a military rank. It is granted to generals for exceptional achievements...
in the French Army
French Army
The French Army, officially the Armée de Terre , is the land-based and largest component of the French Armed Forces.As of 2010, the army employs 123,100 regulars, 18,350 part-time reservists and 7,700 Legionnaires. All soldiers are professionals, following the suspension of conscription, voted in...
.

In the German Navy
German Navy
The German Navy is the navy of Germany and is part of the unified Bundeswehr .The German Navy traces its roots back to the Imperial Fleet of the revolutionary era of 1848 – 52 and more directly to the Prussian Navy, which later evolved into the Northern German Federal Navy...
, the rank was the equivalent of a British admiral of the fleet or a United States fleet admiral. It was created in 1901, and like field marshal
Field Marshal
Field Marshal is a military rank. Traditionally, it is the highest military rank in an army.-Etymology:The origin of the rank of field marshal dates to the early Middle Ages, originally meaning the keeper of the king's horses , from the time of the early Frankish kings.-Usage and hierarchical...
s its holders were authorised to carry a baton
Baton (symbol)
The ceremonial baton is a short, thick stick, carried by select high-ranking military officers as a uniform article. The baton is distinguished from the swagger stick in being thicker and less functional . Unlike a staff of office, a baton is not rested on the ground...
. 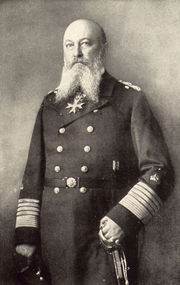 Before and during World War I, the following men were made grand admirals of the German Kaiserliche Marine
Kaiserliche Marine
The Imperial German Navy was the German Navy created at the time of the formation of the German Empire. It existed between 1871 and 1919, growing out of the small Prussian Navy and Norddeutsche Bundesmarine, which primarily had the mission of coastal defense. Kaiser Wilhelm II greatly expanded...
(Imperial Navy):


The Kriegsmarine also used the rank of general admiral
General Admiral
General admiral was a Danish, Dutch, German, Russian, Portuguese, Spanish and Swedish naval rank. Its historic origin is a title high military or naval dignitaries of early modern Europe sometimes held, for example the commander-in-chief of the Dutch Republic's navy .-Third Reich:In the German...
(Generaladmiral) which was senior to a full admiral
Admiral
Admiral is the rank, or part of the name of the ranks, of the highest naval officers. It is usually considered a full admiral and above vice admiral and below admiral of the fleet . It is usually abbreviated to "Adm" or "ADM"...
, but junior to a grand admiral.

The rank of grand admiral (in Italian
Italian language
Italian is a Romance language spoken mainly in Europe: Italy, Switzerland, San Marino, Vatican City, by minorities in Malta, Monaco, Croatia, Slovenia, France, Libya, Eritrea, and Somalia, and by immigrant communities in the Americas and Australia...
, grande ammiraglio) was created by Benito Mussolini
Benito Mussolini
Benito Amilcare Andrea Mussolini was an Italian politician who led the National Fascist Party and is credited with being one of the key figures in the creation of Fascism....
in 1924. It was established primarily to honour Paolo Thaon di Revel
Paolo Thaon di Revel
Paolo Emilio Thaon di Revel, 1st Duca del Mare was an Italian admiral of the Royal Italian Navy during World War I and later a politician....
, who had been head of the Italian Regia Marina
Regia Marina
The Regia Marina dates from the proclamation of the Kingdom of Italy in 1861 after Italian unification...
during World War I — he was the only person to be awarded the rank. It was equivalent to marshal of Italy
Marshal of Italy
Marshal of Italy was a rank in the Italian Royal Army . Originally created in 1924 by Italian dictator Benito Mussolini for the purpose of honoring Generals Luigi Cadorna and Armando Diaz, the rank was granted to several other general officers from 1926 to 1943...
in the army and also marshal of the Air Force
Marshal of the Air Force
Marshal of the Air Force is the English term for the most senior rank in a number of air forces. The ranks described by this term can properly be considered marshal ranks....
.

Anton Haus
Anton Haus
Anton Haus was an Austrian naval officer. Despite his German surname, he was born to a Slovenian-speaking family in Tolmein . Haus was fleet commander of the Austro-Hungarian Navy in World War I and was the Navy's Grand Admiral from 1916 until his death.-Biography:Haus entered the Navy in 1869...
, commander of the Austro-Hungarian
Austria-Hungary
Austria-Hungary , more formally known as the Kingdoms and Lands Represented in the Imperial Council and the Lands of the Holy Hungarian Crown of Saint Stephen, was a constitutional monarchic union between the crowns of the Austrian Empire and the Kingdom of Hungary in...
navy for part of World War I, was given the title of grand admiral (Großadmiral) in 1916. No other active-duty officer (except members of the Imperial family) was ever given this rank (although Haus's immediate successor, Maximilian Njegovan
Maximilian Njegovan
Maksimilijan Njegovan was a Croatian admiral in the Austro-Hungarian Navy. He was the Navy's senior administrator as well as its fleet commander in 1917-18.-Background:Njegovan was born in 1858 in Agram...
, was promoted to grand admiral on the retired list in 1918).

The rank of grand admiral also has appeared in science fiction literature, most significant of which is the literature of Star Wars
Star Wars
Star Wars is an American epic space opera film series created by George Lucas. The first film in the series was originally released on May 25, 1977, under the title Star Wars, by 20th Century Fox, and became a worldwide pop culture phenomenon, followed by two sequels, released at three-year...
. Grand Admiral Thrawn
Grand Admiral Thrawn
Grand Admiral Thrawn is a fictional character and major antagonist from the Star Wars galaxy. He first appeared in Timothy Zahn's Thrawn trilogy, published between 1992 and 1994...
, of the Timothy Zahn
Timothy Zahn
Timothy Zahn is a writer of science fiction short stories and novels. His novella Cascade Point won the 1984 Hugo award. He is the author of nine Star Wars Expanded Universe novels, including seven novels featuring Grand Admiral Thrawn: the Thrawn Trilogy, the Hand of Thrawn duology, Outbound...
novels, is one such science fiction character who held this highest of naval ranks.
The source of this article is wikipedia, the free encyclopedia.  The text of this article is licensed under the GFDL.