Encyclopedia
Grado is a town and comune
Comune
In Italy, the comune is the basic administrative division, and may be properly approximated in casual speech by the English word township or municipality.-Importance and function:...
in the north-eastern Italian
Italy
Italy , officially the Italian Republic languages]] under the European Charter for Regional or Minority Languages. In each of these, Italy's official name is as follows:;;;;;;;;), is a unitary parliamentary republic in South-Central Europe. To the north it borders France, Switzerland, Austria and...
region of Friuli-Venezia Giulia
Friuli-Venezia Giulia
Friuli–Venezia Giulia is one of the twenty regions of Italy, and one of five autonomous regions with special statute. The capital is Trieste. It has an area of 7,858 km² and about 1.2 million inhabitants. A natural opening to the sea for many Central European countries, the region is...
, located on a peninsula of the Adriatic Sea
Adriatic Sea
The Adriatic Sea is a body of water separating the Italian Peninsula from the Balkan peninsula, and the system of the Apennine Mountains from that of the Dinaric Alps and adjacent ranges...
between Venice
Venice
Venice is a city in northern Italy which is renowned for the beauty of its setting, its architecture and its artworks. It is the capital of the Veneto region...
and Trieste
Trieste
Trieste is a city and seaport in northeastern Italy. It is situated towards the end of a narrow strip of land lying between the Adriatic Sea and Italy's border with Slovenia, which lies almost immediately south and east of the city...
.

Once mainly a fishing center, today it is a popular tourist destination, known commonly as L'Isola del Sole ("The Sunny Island"), also famous because it is also a spa town
Spa town
A spa town is a town situated around a mineral spa . Patrons resorted to spas to "take the waters" for their purported health benefits. The word comes from the Belgian town Spa. In continental Europe a spa was known as a ville d'eau...
; together with Marano Lagunare
Marano Lagunare
Marano Lagunare is a comune in the Province of Udine in the Italian region Friuli-Venezia Giulia, located about 50 km northwest of Trieste and about 35 km south of Udine...
, it is the center of a lagoon, which is famous for its uncontaminated nature. Grado is the birthplace of Biagio Marin
Biagio Marin
Biagio Marin was an Italian poet, best known from his poems in the Venetian-Friulian dialect, which had no literary tradition until then. In his writings he has never obeyed rhetoric or poetics...
, a poet who sang about the island in the local Venetian dialect. 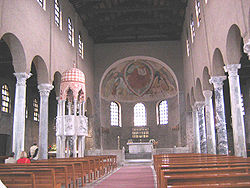 In Roman times the city, known as ad Aquae Gradatae, was first port for ships entering the Natissa (Natisone
Natisone
The Natisone is a river that flows for some time as a border river between Slovenia and Italy, continues in Slovenia and then crosses the border and continues in Eastern Friuli, in north-eastern Italy...
), headed upstream to Aquileia
Aquileia
Aquileia is an ancient Roman city in what is now Italy, at the head of the Adriatic at the edge of the lagoons, about 10 km from the sea, on the river Natiso , the course of which has changed somewhat since Roman times...
.

Quite close is the ancient Roman city of Aquileia
Aquileia
Aquileia is an ancient Roman city in what is now Italy, at the head of the Adriatic at the edge of the lagoons, about 10 km from the sea, on the river Natiso , the course of which has changed somewhat since Roman times...
; during the late years of the Western Roman Empire
Western Roman Empire
The Western Roman Empire was the western half of the Roman Empire after its division by Diocletian in 285; the other half of the Roman Empire was the Eastern Roman Empire, commonly referred to today as the Byzantine Empire....
many people fled from Aquileia to Grado in order to find a safer place, more protected from the invasions coming from the east. In 452, Nicetas, Bishop of Aquileia, took refuge briefly at Grado; of the same period is the earliest construction of Grado's first Cathedral, the first church of Santa Maria delle Grazie, and the Baptistery. Grado was the home base of the Patriarchate's fleet.

In 568, after the invasion of the Lombards
Lombards
The Lombards , also referred to as Longobards, were a Germanic tribe of Scandinavian origin, who from 568 to 774 ruled a Kingdom in Italy...
, the seat of the Patriarchate of Aquileia was transferred here by the Patriarch Paulinus
Paulinus I of Aquileia
Paulinus I was the first Patriarch of Aquileia from 557 to 571.When he took over the see was in schism with Rome. When the Lombards invaded northern Italy in 569, Paulinus fled Aquileia with his treasures, as had the other Archibishop in schism with Rome, Honoratus of Milan...
. After the Schism of the Three Chapters
Schism of the Three Chapters
The Schism of the Three Chapters was a schism that affected the Roman Catholic Church in North Italy lasting from 553 to 698 AD, although the area out of communion with Rome contracted throughout that time...
, two different Patriarchs were elected: the Patriarch of Grado
Patriarch of Grado
This is a list of the Patriarchs of Grado . The patriarchate came into being when the schismatic Patriarch of Aquileia, Paulinus , moved to Grado in the mid 6th century. But in their reunion with Rome in 606, a rival office was set up in Old-Aquileia. Aquileia later entered communion with Rome but...
exerted its jurisdiction over the Latin-origin people living in the coast and in the Venetian Lagoon
Venetian Lagoon
The Venetian Lagoon is the enclosed bay of the Adriatic Sea in which the city of Venice is situated. Its name in the Venetian language, Laguna Veneta— cognate of Latin lacus, "lake"— has provided the international name for an enclosed, shallow embayment of saltwater, a lagoon.The Venetian Lagoon...
, while that of Old-Aquileia, later moved to Cividale
Cividale del Friuli
-External links:*...
, had its jurisdiction on the mainland. A long lasting dispute over the authority of the two patriarchs ensued: in 993 the patriarch of Aquileia, Popo, conquered Grado, but was unable to keep possession of it. The matter was settled only in 1027 when the Pope declared the supremacy of the seat of Aquileia over Grado and the Venetian province.

The seat of the Patriarchate was transferred to Venice
Venice
Venice is a city in northern Italy which is renowned for the beauty of its setting, its architecture and its artworks. It is the capital of the Veneto region...
in 1451 by Pope Nicholas V
Pope Nicholas V
Pope Nicholas V , born Tommaso Parentucelli, was Pope from March 6, 1447 to his death in 1455.-Biography:He was born at Sarzana, Liguria, where his father was a physician...
. Reduced to a minor hamlet, Grado was sacked by the English
English people
The English are a nation and ethnic group native to England, who speak English. The English identity is of early mediaeval origin, when they were known in Old English as the Anglecynn. England is now a country of the United Kingdom, and the majority of English people in England are British Citizens...
in 1810 and by the French
Military history of France
The military history of France encompasses an immense panorama of conflicts and struggles extending for more than 2,000 years across areas including modern France, greater Europe, and European territorial possessions overseas....
in 1812. Grado was acquired by Austria in 1815, to which it belonged until 1918, when it was returned to Italy after its victory in World War I.

Today there are frequent finds of inscriptions, sarcophagi, marble sculpture and small bronzes that once furnished its villas. The remains of one of these villas has been excavated on the islet of Gorgo
Gorgo
Gorgo is a 1961 British Giant monster movie. Directed by Eugène Lourié, it tells the story of an underwater monster's capture off the coast of Ireland. The monster is taken to London to be featured as a circus attraction. The film borrows elements from other monster movies, such as Godzilla and...
in the lagoon.

Of the ancient fortress only a tower, turned into a private residence, and parts of the walls can still be seen. Under the Town Hall are remains of the Palaeo-Christian basilica of Piazza Vittoria.

Today, Grado attracts scores of tourists each year to its hotels and campgrounds. A large water park run by a municipal corporation is the main attraction, complete with indoor and outdoor swimming pools, and a health center offering spa treatments.

The town also boasts a well-preserved pedestrian-only center, in which many shops, bars, and restaurants are located.

Grado also offers facilities for many sporting activities, including tennis, wind-surfing, and golf.