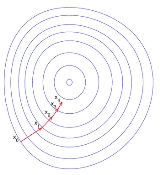 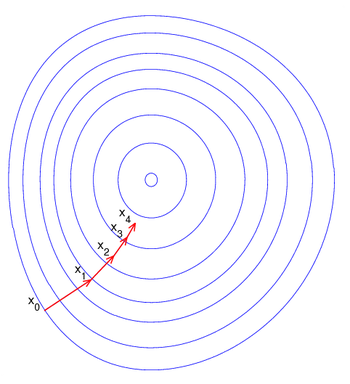 decreases fastest if one goes from

in the direction of the negative gradient of

. It follows that, if

a small enough number, then

. With this observation in mind, one starts with a guess

for a local minimum of

, and considers the sequence

so hopefully the sequence

converges to the desired local minimum. Note that the value of the step size

is allowed to change at every iteration.

This process is illustrated in the picture to the right. Here

is assumed to be defined on the plane, and that its graph has a bowl
Bowl (vessel)
A bowl is a common open-top container used in many cultures to serve food, and is also used for drinking and storing other items. They are typically small and shallow, although some, such as punch bowls and salad bowls, are larger and often intended to serve many people.Bowls have existed for...
shape. The blue curves are the contour line
Contour line
A contour line of a function of two variables is a curve along which the function has a constant value. In cartography, a contour line joins points of equal elevation above a given level, such as mean sea level...
s, that is, the regions on which the value of

is constant. A red arrow originating at a point shows the direction of the negative gradient at that point. Note that the (negative) gradient at a point is orthogonal to the contour line going through that point. We see that gradient descent leads us to the bottom of the bowl, that is, to the point where the value of the function

The Rosenbrock function has a narrow curved valley which contains the minimum. The bottom of the valley is very flat. Because of the curved flat valley the optimization is zig-zagging slowly with small stepsizes towards the minimum.

The "Zig-Zagging" nature of the method is also evident below, where the gradient ascent method is applied to 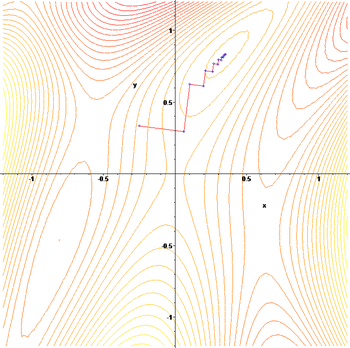 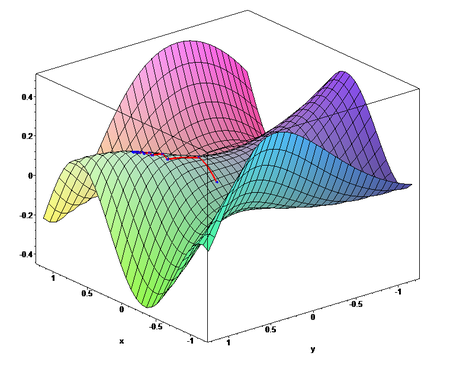 For some of the above examples, gradient descent is relatively slow close to the minimum: Technically, its asymptotic rate of convergence is inferior to other methods. For poorly conditioned convex problems, gradient descent increasingly 'zigzags' as the gradients point nearly orthogonally to the shortest direction to a minimum point. For more details, see Comments below:


Solution of a linear system

Gradient descent can be used to solve a system of linear equations, reformulated as a quadratic minimization problem, e.g., using linear least squares
Linear least squares
In statistics and mathematics, linear least squares is an approach to fitting a mathematical or statistical model to data in cases where the idealized value provided by the model for any data point is expressed linearly in terms of the unknown parameters of the model...
. Solution of

the Euclidean norm is used, in which case

In the case that

is real, square, symmetric and positive definite, a different popular choice of the norm is

which produces a different equation with a better condition number
Condition number
In the field of numerical analysis, the condition number of a function with respect to an argument measures the asymptotically worst case of how much the function can change in proportion to small changes in the argument...
:

In either case, the line search minimization, finding the locally optimal step size

on every iteration, can be performed analytically, and explicit formulas for the locally optimal


Solution of a non-linear system

Consider a nonlinear system of equations:

suppose we have the function

and the objective function

must be found such that

. This can be done with any of a variety of line search algorithms. One might also simply guess

evaluating at this value,

to the next step's value of

is a sizable decrease in the objective function. Further steps would reduce its value until a solution to the system was found.

Gradient descent works in spaces of any number of dimensions, even in infinite-dimensional ones. In the latter case the search space is typically a function space
Function space
In mathematics, a function space is a set of functions of a given kind from a set X to a set Y. It is called a space because in many applications it is a topological space, a vector space, or both.-Examples:...
, and one calculates the Gâteaux derivative
Gâteaux derivative
In mathematics, the Gâteaux differential or Gâteaux derivative is a generalization of the concept of directional derivative in differential calculus. Named after René Gâteaux, a French mathematician who died young in World War I, it is defined for functions between locally convex topological vector...
of the functional to be minimized to determine the descent direction.

The gradient descent can take many iterations to compute a local minimum with a required accuracy, if the curvature
Curvature
In mathematics, curvature refers to any of a number of loosely related concepts in different areas of geometry. Intuitively, curvature is the amount by which a geometric object deviates from being flat, or straight in the case of a line, but this is defined in different ways depending on the context...
in different directions is very different for the given function. For such functions, preconditioning, which changes the geometry of the space to shape the function level sets like concentric circles, cures the slow convergence. Constructing and applying preconditioning can be computationally expensive, however.

The gradient descent can be combined with a line search, finding the locally optimal step size

on every iteration. Performing the line search can be time-consuming. Conversely, using a fixed small

Methods based on Newton's method
Newton's method in optimization
In mathematics, Newton's method is an iterative method for finding roots of equations. More generally, Newton's method is used to find critical points of differentiable functions, which are the zeros of the derivative function.-Method:...
and inversion of the Hessian
Hessian matrix
In mathematics, the Hessian matrix is the square matrix of second-order partial derivatives of a function; that is, it describes the local curvature of a function of many variables. The Hessian matrix was developed in the 19th century by the German mathematician Ludwig Otto Hesse and later named...
using conjugate gradient techniques can be better alternatives. Generally, such methods converge in fewer iterations, but the cost of each iteration is higher. An example is the BFGS method
BFGS method
In numerical optimization, the Broyden–Fletcher–Goldfarb–Shanno method is a method for solving nonlinear optimization problems ....
which consists in calculating on every step a matrix by which the gradient vector is multiplied to go into a "better" direction, combined with a more sophisticated line search algorithm, to find the "best" value of

For extremely large problems, where the computer memory issues dominate, a limited-memory method such as L-BFGS should be used instead of BFGS or the steepest descent.

of a gradient flow.

The gradient descent algorithm is applied to find a local minimum of the function f(x)=x4−3x3+2, with derivative f(x)=4x3−9x2. Here is an implementation in the Python programming language.


The above piece of code has to be modified with regard to step size according to the system at hand and convergence can be made faster by using an adaptive step size. In the above case the step size is not adaptive. It stays at 0.01 in all the directions which can sometimes cause the method to fail by diverging from the minimum.