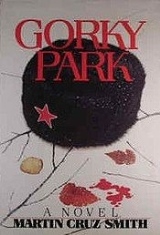 Encyclopedia
Gorky Park is a 1981 crime
Crime fiction
Crime fiction is the literary genre that fictionalizes crimes, their detection, criminals and their motives. It is usually distinguished from mainstream fiction and other genres such as science fiction or historical fiction, but boundaries can be, and indeed are, blurred...
novel
Novel
A novel is a book of long narrative in literary prose. The genre has historical roots both in the fields of the medieval and early modern romance and in the tradition of the novella. The latter supplied the present generic term in the late 18th century....
written by Martin Cruz Smith
Martin Cruz Smith
Martin Cruz Smith is an American mystery novelist.-Early life and education:Born Martin William Smith in Reading, Pennsylvania, he was educated at the University of Pennsylvania, located in Philadelphia, Pennsylvania, and received a Bachelor of Arts degree in creative writing in 1964...
set in the Soviet Union
Soviet Union
The Soviet Union , officially the Union of Soviet Socialist Republics , was a constitutionally socialist state that existed in Eurasia between 1922 and 1991....
. It follows Arkady Renko
Arkady Renko
Arkady Renko is a fictional detective who is the central character of seven novels by the American writer Martin Cruz Smith.-Character timeline:...
, a chief investigator for the Militsiya
Militsiya
Militsiya or militia is used as an official name of the civilian police in several former communist states, despite its original military connotation...
, who is assigned to a case involving three corpses found in Gorky Park
Gorky Park (Moscow)
Gorky Central Park of Culture and Leisure is an amusement park in Moscow, named after Maxim Gorky.-History:...
, an amusement park
Amusement park
thumb|Cinderella Castle in [[Magic Kingdom]], [[Disney World]]Amusement and theme parks are terms for a group of entertainment attractions and rides and other events in a location for the enjoyment of large numbers of people...
in Moscow
Moscow
Moscow is the capital, the most populous city, and the most populous federal subject of Russia. The city is a major political, economic, cultural, scientific, religious, financial, educational, and transportation centre of Russia and the continent...
, who have had their face
Face
The face is a central sense organ complex, for those animals that have one, normally on the ventral surface of the head, and can, depending on the definition in the human case, include the hair, forehead, eyebrow, eyelashes, eyes, nose, ears, cheeks, mouth, lips, philtrum, temple, teeth, skin, and...
s and finger
Finger
A finger is a limb of the human body and a type of digit, an organ of manipulation and sensation found in the hands of humans and other primates....
tips cut off by the murderer to prevent identification.

Despite being born into the nomenklatura
Nomenklatura
The nomenklatura were a category of people within the Soviet Union and other Eastern Bloc countries who held various key administrative positions in all spheres of those countries' activity: government, industry, agriculture, education, etc., whose positions were granted only with approval by the...
himself, Renko exposes corruption and dishonesty on the part of influential and well-protected members of the elite, regardless of the consequences. A short episode of the book takes place in the United States
United States
The United States of America is a federal constitutional republic comprising fifty states and a federal district...
, but when exposed to western capitalist
Capitalism
Capitalism is an economic system that became dominant in the Western world following the demise of feudalism. There is no consensus on the precise definition nor on how the term should be used as a historical category...
society, he finds it to be equally corrupt and returns to the Soviet Union. (While he may have found corruption in the West, in Red Square
Red Square (novel)
Red Square is a crime novel by Martin Cruz Smith, set in the Soviet Union in the year 1991. It is a sequel to Gorky Park and Polar Star and features the Investigator Arkady Renko, taking place during the period of the collapse of the Soviet Union....
, it is stated that he returned to the Soviet Union in order to protect his love interest, Irina, from also being forced to return.)

Pathoheterodoxy Syndrome is a fictional mental illness. It is the idea of a misguided arrogance. The syndrome was said to be contracted by Chief Investigator Renko, who was thus described by a KGB
KGB
The KGB was the commonly used acronym for the . It was the national security agency of the Soviet Union from 1954 until 1991, and was the premier internal security, intelligence, and secret police organization during that time.The State Security Agency of the Republic of Belarus currently uses the...
agent:

The fact that Renko is described as having this syndrome may be one of the factors to believe he is a Byronic hero
Byronic hero
The Byronic hero is an idealised but flawed character exemplified in the life and writings of English Romantic poet Lord Byron. It was characterised by Lady Caroline Lamb, later a lover of Byron's, as being "mad, bad, and dangerous to know"...
.
Smith satirically created the concept of "Pathoheterodoxy", to show the way that the Soviet Union would have characterised Soviet dissidents and their failure to obey and conform.

While the syndrome itself is fictional, the incident also alludes to the very real Soviet practice of labelling dissidents as mentally ill, and of forcibly treating them with psychotropic drugs. Renko's love interest, Irina, was likewise revealed to have been institutionalized for similarly false "psychiatric problems" and forcibly treated at some earlier time, resulting in a tumor that left her with a severe facial blemish and blind in one eye.